Made by JOY BC

Artist Ruth Ewan and jeweller Joy BC have collaborated to create FEMINIST CHARMS, a charm bracelet featuring five key symbols from the Glasgow Women’s Library archive. The bracelet functions as a form of timeline, reflecting the eclectic objects and the historic and urgent issues encapsulated within the Library’s collection.

The bracelet is presented in a special archival box and can be purchased as a complete edition or individual charms can be bought separately. The charms can be made to order in 9ct yellow gold plate, please contact us for prices. Each charm is on a lobster clasp and can be repositioned on the bracelet, removed and reattached to other jewellery pieces.

When ordering, please specify your choice of charm(s) in the ‘order notes’ box as you checkout or by emailing us at info@womenslibrary.org.uk once you’ve completed your order. 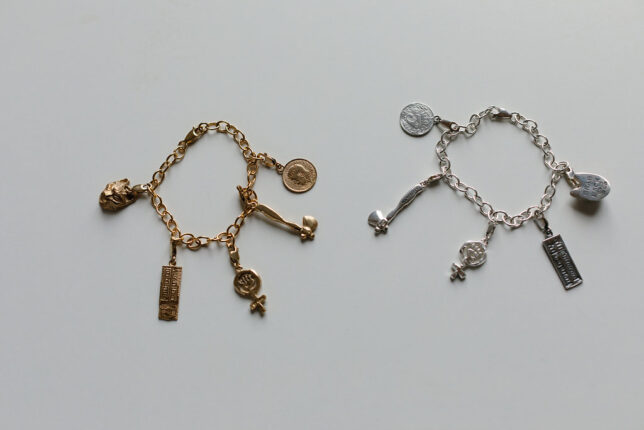 The Feminist Charms are:

SOLD OUT! Votes for Women Coin (1912) – This coin is cast from a ‘thrupence’ defaced with the slogan ‘votes for women’. The Library holds pennies defaced by suffragettes, one dating from 1907 and one from 1912. A thrupence coin, small in size, traditionally features on charm bracelets from this era.

SOLD OUT! Carry A Nation Axe (1846–1911) – A radical member of the Temperance movement in The United States of America, Carry A. Nation campaigned all over the US, paying her way by selling little pins shaped like hatchets that symbolised her struggle. She was known as the ‘Bar Room Smasher’ and was often depicted clutching an axe in one hand ready to attack any bar that needed smashing.

SOLD OUT! Sisterhood Symbol (c.1970s) – Merging the female Venus symbol with the long-standing symbol for workers’ resistance and solidarity, it appears the ‘sisterhood symbol’ first emerged in Europe during the women’s liberation movement of the late 1960s and ‘70s, popularised by use in political tracts and protest banners. The archive holds a silver necklace featuring the symbol as pendant.

SOLD OUT! All Different All Equal (c.1995) – This is a cast of a pin badge from the Library’s badge collection. The original was a souvenir of the European Youth Campaign for Diversity, c.1995, and is a two-tone black and white design.

SOLD OUT! This Pussy Grabs Back (2016) – Following Trump’s infamous remark ‘grab her by the pussy’, many activists present on the Women’s March of 2017 reclaimed the phrase, turning it around. This charm features a cat’s head sculpted by Joy BC and engraved with the promise to ‘grab back’.

Read more about the charms here.

Please specify your choice of charm(s) in the ‘order notes’ box as you checkout or by emailing us at info@womenslibrary.org.uk once you’ve completed your order. 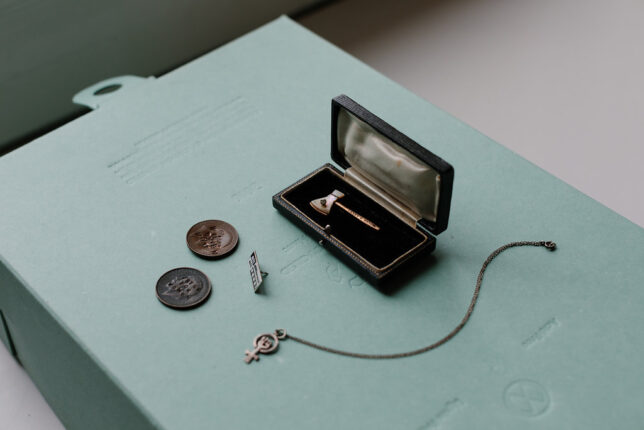 Ruth Ewan is an artist based in Glasgow. Her work takes many forms including events, installation and printed matter. Her practice explores histories of radical and utopian thought, bringing to light specific ideas in order to question how we might live today. Often engaging with others, Ewan’s projects involve a process of focused research and close collaboration – in the past she has worked with historians, traditional crafts people, horticulturalists, archeologists, musicians, bakers and children.

Joy BC currently works from a studio in South East London and at the Royal College of Art, where she is undergoing her Masters in Jewellery and Metal. Joy has made work to protect people while travelling; remember the dead; protest against cruelty to women; celebrate love; and through her work she often plays with deconstructing classical forms. Joy’s aim is to create jewellery and artefacts that encourage conversation between the onlooker and wearer. 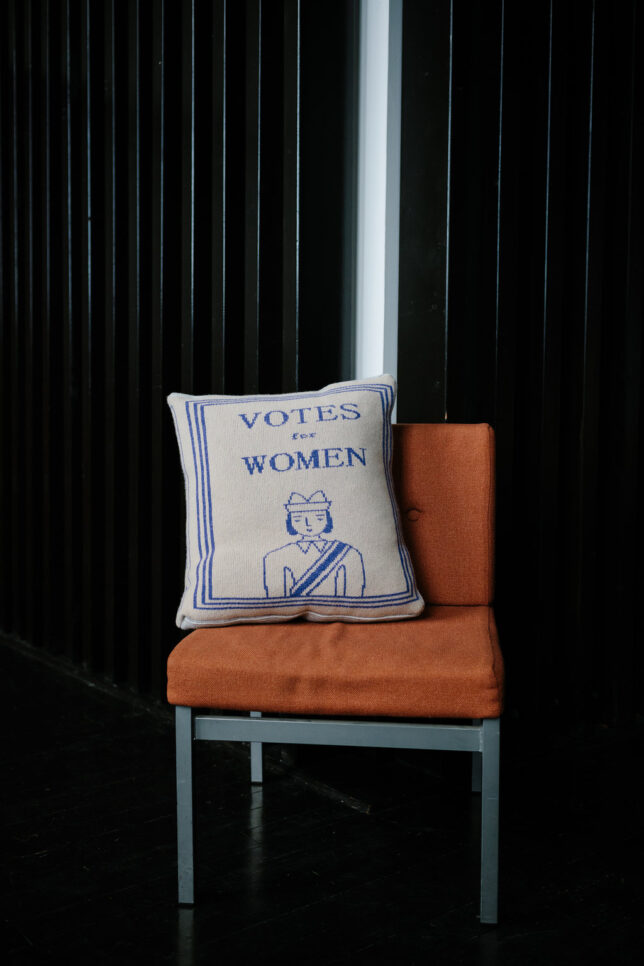 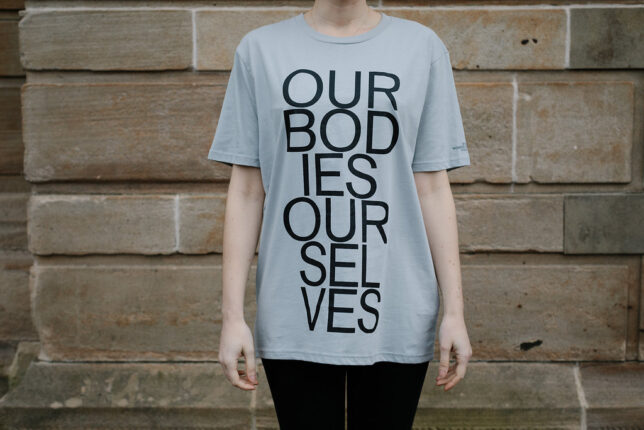 Our online shop is currently open, however due to our current Covid-19 safety measures there may be a delay of up to 10 days as we process your order. We really appreciate your support and patience during this time.