The Sex Between the Covers exhibition was curated by Emma Smith. In this essay Emma gives some context for the exhibition and the wider Sex in the Women’s Library programme at GWL and how she grappled with a huge array of sources to generate a capsule exhibition with four key themes. 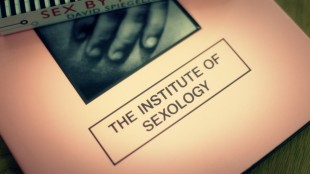 The field of sexology is a multi-discipline study of human sexuality. Studies of sexology typically cover topics such as sexual development (puberty), sexual orientation, sexual activity and relationships from medical, psychological and social perspectives. Discussion and study of human sexuality has always existed, from the Roman poetic series The Art of Love1 to the Kama Sutra.2 Sexology became an official field of scientific study and research in the mid-1800s. Some early works considered to be the roots of sexological study include a French study of Parisian prostitutes published by Alexander Parent-Duchatelet in 18373, and one of the first studies into homosexuality and bisexuality published by German psychiatrist Richard Von Krafft-Ebing in 1886.4 Studies of sexology have changed the way we understand sex, gender, and relationships. These early studies led to the creation of terminologies to express our innermost desires and identities, and modern research continues to rewrite and expand this understanding.

In November 2014, Wellcome Collection launched an exhibition entitled The Institute of Sexology exploring the contributions and discoveries made by early pioneers of sex research. As part of this season, Glasgow Women’s Library was invited to create a capsule exhibit of objects and texts that represented milestones and revolutions in our political, social and cultural views of sex.

While Wellcome Collection focussed on the men and women who ‘made’ sexology, I wanted to focus on how their work changed women’s everyday lives and experiences of sex. I was interested not just in sex as an act, but in all the things that influence and are influenced by sex. This led me to wider explorations of society, of love, relationships, family, art, literature, and gender.

As I grew to know Glasgow Women’s Library, I was struck by the sense of community here. Glasgow Women’s Library is not just a building, or a library, or a collection. It is a community of wonderful, diverse, interesting women with stories and experiences, and I felt strongly that anything I contributed to the collection should reflect this most important aspect of the library. With this in mind, I attempted to build an exhibition that was diverse, fun, and accessible to all. I aimed to do justice to this wonderful collection and to those who use it. The capsule exhibition I created (I was restricted to selecting 30 objects and texts from the thousands of items across the lending and reference library, museum and archive collections!) and that is reflected in this publication draws on materials that can be accessed by all beyond the exhibition run. The themes for the exhibition are detailed below and again are ones that visitors and researchers will find in abundance in the shelves and boxes at Glasgow
Women’s Library.

Women and the Home

Traditional views of women and sexuality consider women’s engagement in sex not stemming from pleasure, but from a desire or social expectation to procreate. However, the fight for women’s suffrage in Britain kick-started changes in the ways women’s bodies and minds were socially understood.

In 1871, Charles Darwin wrote that men and women had taken different evolutionary paths and become fundamentally different.5 While men were associated with strength, intelligence, and logic, women were considered passive, fragile, and emotional. As women fought for their right to vote, anxiety grew around how these fixed ideas of gender relations may be changed if women were granted equal rights. Many believed that the ‘natural’ system of men as breadwinners and women as housewives and mothers was threatened, that men would become feminine and enslaved, and their wives controlling and masculine. Women who embodied this kind of femininity became known as New Women; independent, often educated and wealthy woman who exercised personal, social and economic control over their own affairs.6

Although these changes began in the late 1800s, cultural attitudes were slow to adjust to new perspectives. The idea that women are more passive and weaker than men has affected not only our understandings and experiences of sex as a physical act, but of sex as a social category. It has placed restriction on the kind of work available to women, with women historically linked inextricably to motherhood as a primary role. It also changes the way we understand women’s psychological experiences of desire, and curtails the way those desires can be physically expressed. These attitudes and beliefs represent the historical starting point of an exploration into how sexology began to change women’s lives and experiences.

The traditional gender roles outlined in Women and The Home underwent further changes during the sexual revolution of the 1960s. Challenges to what was considered sexual ‘normality’ (sex within monogamous, heterosexual marriages) opened up greater personal freedoms, changing values of sexual expression, sexual orientations, and sexual openness.

It also expanded markets in erotica and pornography, and in the research and production of family planning aids such as contraceptives, giving women more opportunity to discover and experience their sexuality. Sexologists, psychoanalysts and feminists have long been engaged in exploring how female sexual pleasure functions at both a physical and psychological level.

In particular, during the Second Wave feminism from the mid 20th century a lot of attention was given to defining the female orgasm. Sigmund Freud had asserted that orgasms involving clitoral stimulation were a sign of sexual immaturity. In 1968, Anne Koedt wrote The Myth of the Vaginal Orgasm7 to debunk the idea that female orgasm could or should only be achieved through (heterosexual) penetration.

Feminist examinations of sex during this period were concerned with questioning the male-defined sexological definitions of female sexuality and desire. Instead, they encouraged women to articulate their desires and reject the theory that a ‘true’ form of female sexual pleasure existed.8 The era saw the establishment of the first sex toy stores, including Good Vibrations in San Francisco (1977), and the Xandria Collection which created products for customers with physical and developmental impairments who wished to experience a full sex life.

However, open exploration of sexuality came with its own problems. Writing in 1971 for Boston’s Cell 16, Dana Densmore claimed that as sexuality and sexual practice became affiliated with liberation, it was socially expected that women who wished to be considered liberated should be having regular sex.9 Another unnamed writer notes that equating penis-in-vagina sex with liberation meant that men became the key which could ‘unlock’ women’s liberation.10 Feminists today still continue to debate what it means to have a liberated sex life. Many argue that heterosexual penetrative sex is problematized by power structures, and therefore cannot be feminist. On the other hand, others counter that a woman’s sexual choices are always liberated so long as they are her own choice, regardless of the sexual acts she practices.

The GWL collection illuminates these debates with examples from art, literature, erotica, feminist and queer theory.

Changes in sexual practice were reflected by shifts in women’s health concerns. Medical advances in the fields of contraception and family planning aids gave women greater personal control over their sexual health and sexual practice. The first birth control clinic in the UK was established in 1921 in London; staffed by doctors and midwives, women were taught to use physical contraceptives such as cervical caps. By 1930, birth control advice was freely available in welfare centres around the country. The first version of the modern contraceptive pill became publically available in the 1960s, followed by advances in medical abortion (induced through medication rather than surgery) in the 1970s and 1980s.

Although these changes allowed women greater freedom, early contraceptive methods were not without their difficulties. Many women found information about contraceptives to be confusing and contradictory and for some, seeking information from predominantly male medical staff was intimidating.11 Even today, there is no contraceptive that provides certain protection from pregnancy, and studies show that around 50% of women who get pregnant unintentionally are using contraceptives at the time of conception.12

Another key development in women’s reproductive health was the legalisation of abortion in 1967. Prior to this, abortion was not performed by registered medical practitioners with the exception of extreme circumstances, and ‘back street’ abortions held health risks for the patients and legal repercussions for the practitioners. The 1967 Abortion Act legalised abortion until the 28th week of pregnancy. An amendment in 1990 reduced this to the current limit of 24 weeks, with later abortions available in the event of extreme foetal abnormality, risk to the mother’s physical or mental health, or if continuing the pregnancy would result in the mother’s death.

Further changes to abortion law were proposed in 1975, 1977, 1979, 1987, and 2008. Each proposal sought to shorten the period in which abortions are legally available, with the 2008 bill proposing a reduction to 20 weeks. Proposals to shorten abortion limits are based in both moral and scientific arguments. On the scientific side, there is some speculation and uncertainty as to the point at which a foetus becomes able to survive outside the womb, which is the traditional method of calculating abortion limits. For others who take a moral standpoint, many debate whether a foetus can be considered alive and conscious prior to birth, and whether it is morally correct to end this life.13 These debates continue apace in America, with many states proposing contradictory limits for abortion and threatening family planning clinics with closure.

For women who struggled to access medical information, self-education between women played an important role and free abortion on demand has been a central plank of feminist demands. This trend continues today, with young bloggers such as Laci Green producing content to support and educate young women and men on matters of sex, health, and identity.14

Contemporary literature available across the collections at Glasgow Women’s Library shows that sexual violence against women has long been a serious concern for feminists, with little change between debates of the 1960s and modern campaigns. The task of surveying, contextualising and representing violence against women in a safe and sensitive manner was a difficult one for the Sexology Team at Glasgow Women’s Library. We aimed to display the different forms sexualised violence can take place with the aim of raising awareness, provoking discussion and providing support.

Items were included in displays that showed the continuum of feminist debates. Lynn Alderson’s narrative of street harassment focuses on many similar experiences reported in projects such as Everyday Sexism15, and marches similar to Take Back the Night still occur in the form of protests such as SlutWalk16, a movement formed in 2011 to protest against victim blaming in rape cases.

While sexual violence may have changed little in the last 50 years, feminist texts from the collection show the ways we represent violence can often be inaccurate. For example, it is commonly believed that rape is committed by strangers, whereas studies show that 90% of women who have been raped knew their attacker, and one in five women who were raped were attacked by their husband or partner.17

Inaccuracies in the way violence is represented in the media (for example the ubiquity of violence between heterosexual couples) has also been challenged in the feminist and queer texts that we sought to highlight. Intimate partner violence is not restricted to any particular group. Studies show that domestic abuse is as common in LGBT relationships as in heterosexual relationships.18 Around 4 million men are affected by domestic violence every year, accounting for around 9% of reported domestic abuse cases.19 Intimate partner violence often takes many different forms, and is not necessarily marked by physical abuse.