Inequality is experienced through a lack of:

You Have Struck a Rock, International Defence and Aid Fund for Southern Africa 1980 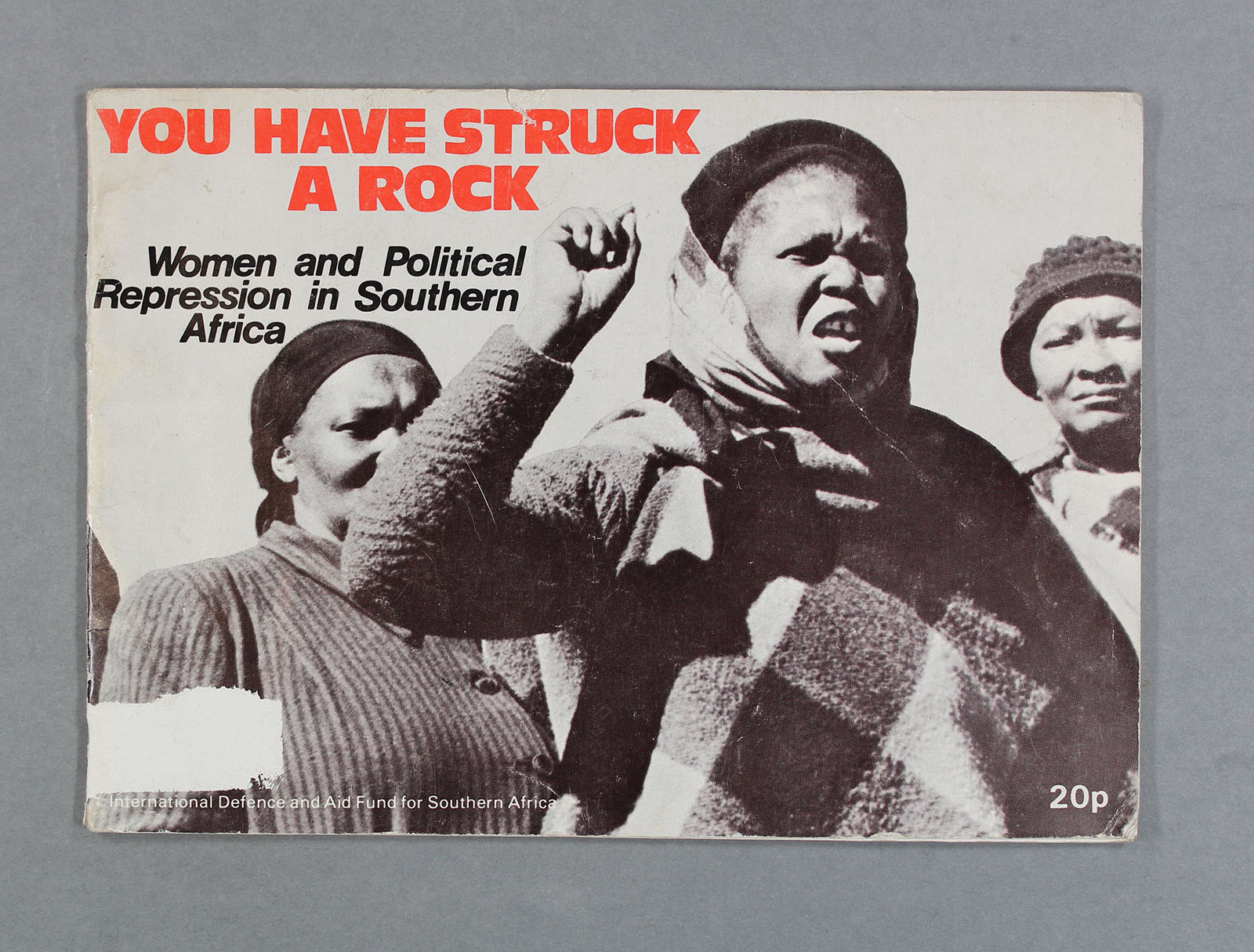 You Have Struck a Rock: Women and Political Repression in Southern Africa, 1980

“Women in Southern Africa have been detained without trial, imprisoned, banned, forced into exile, tortured and harassed in their daily lives… Many women, white and black, have endured years of persecution, sustained by their faith in the justice of their people’s cause’.

This booklet highlights the violent and aggressive treatment of women fighting for equality and political representation in South Africa, Namibia and Zimbabwe. From 1956, the International Defence and Aid Fund raised money to support political prisoners in southern Africa. 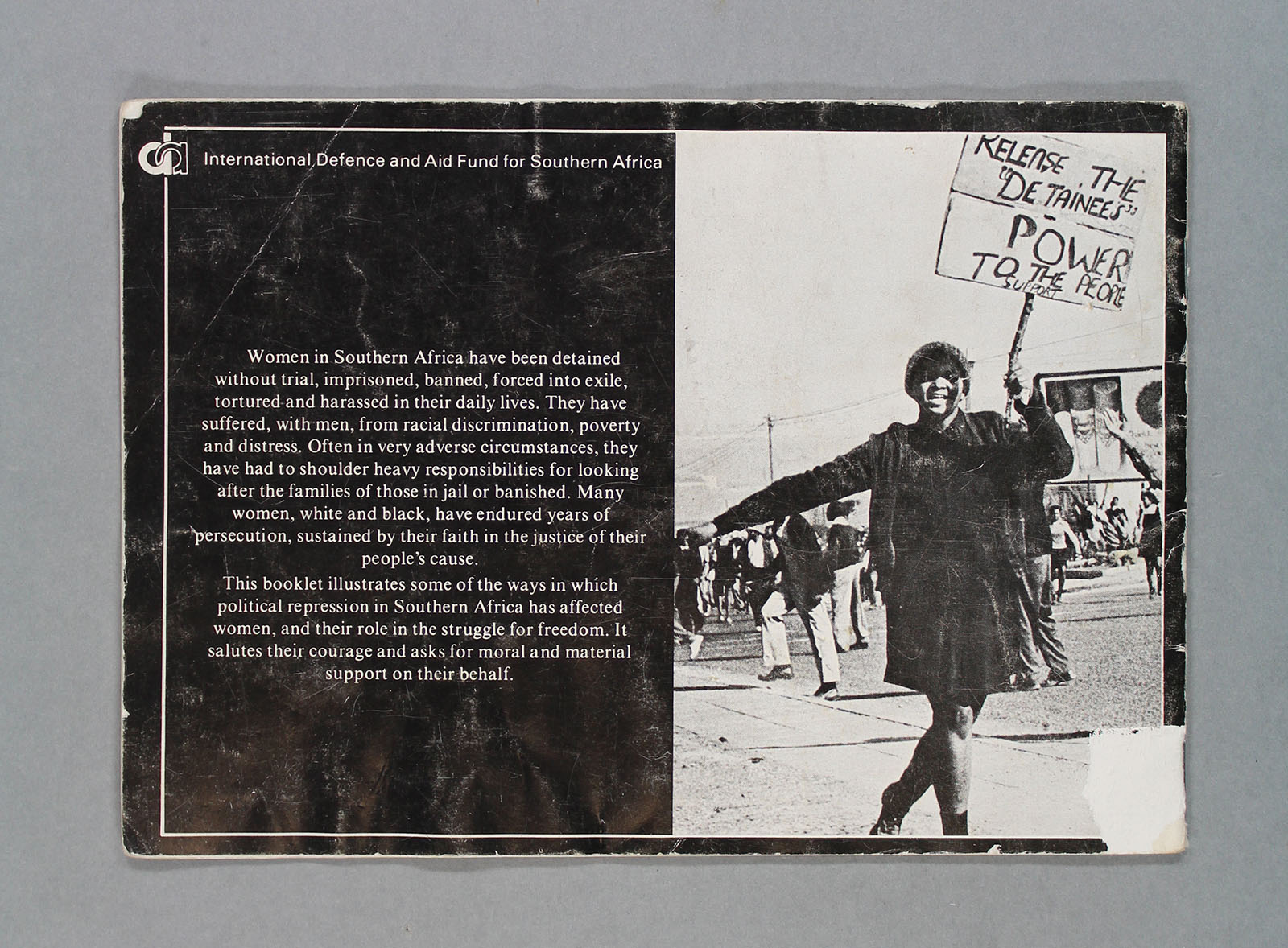 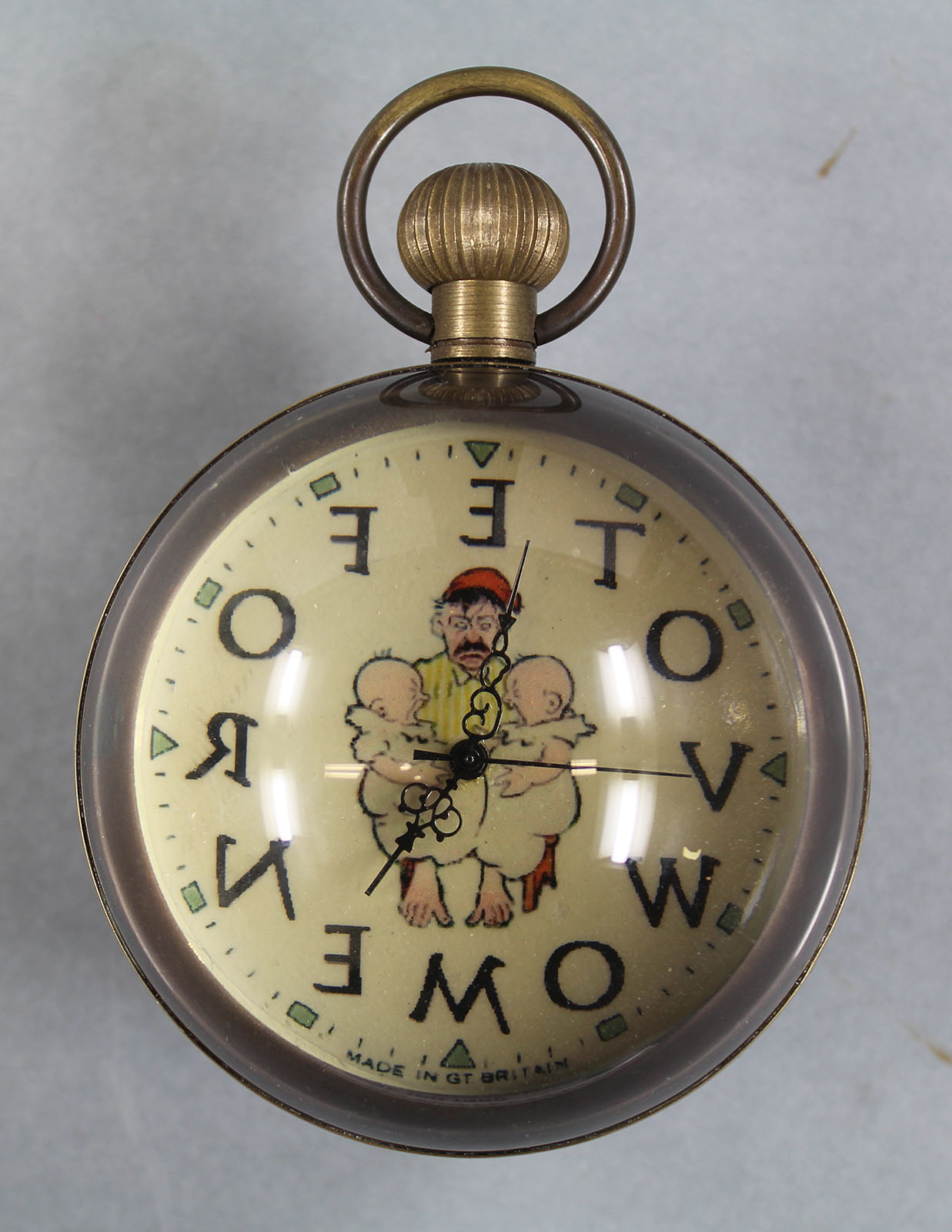 An angry and exhausted father is left at home doing ‘woman’s work’. This piece of propaganda was part of the campaign against women’s suffrage. The paperweight promoted the idea of how men’s lives would be ruined if women got the vote. 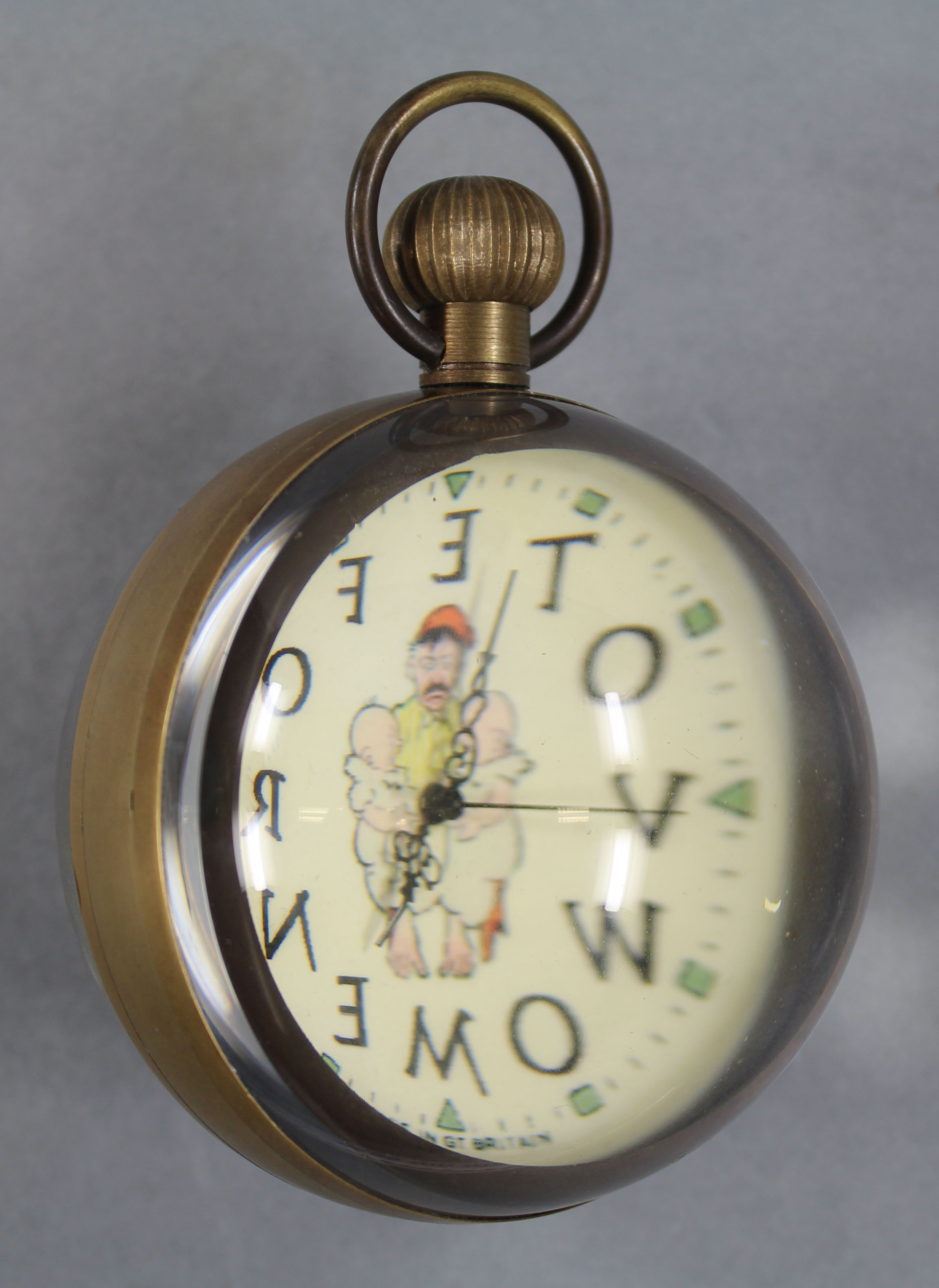 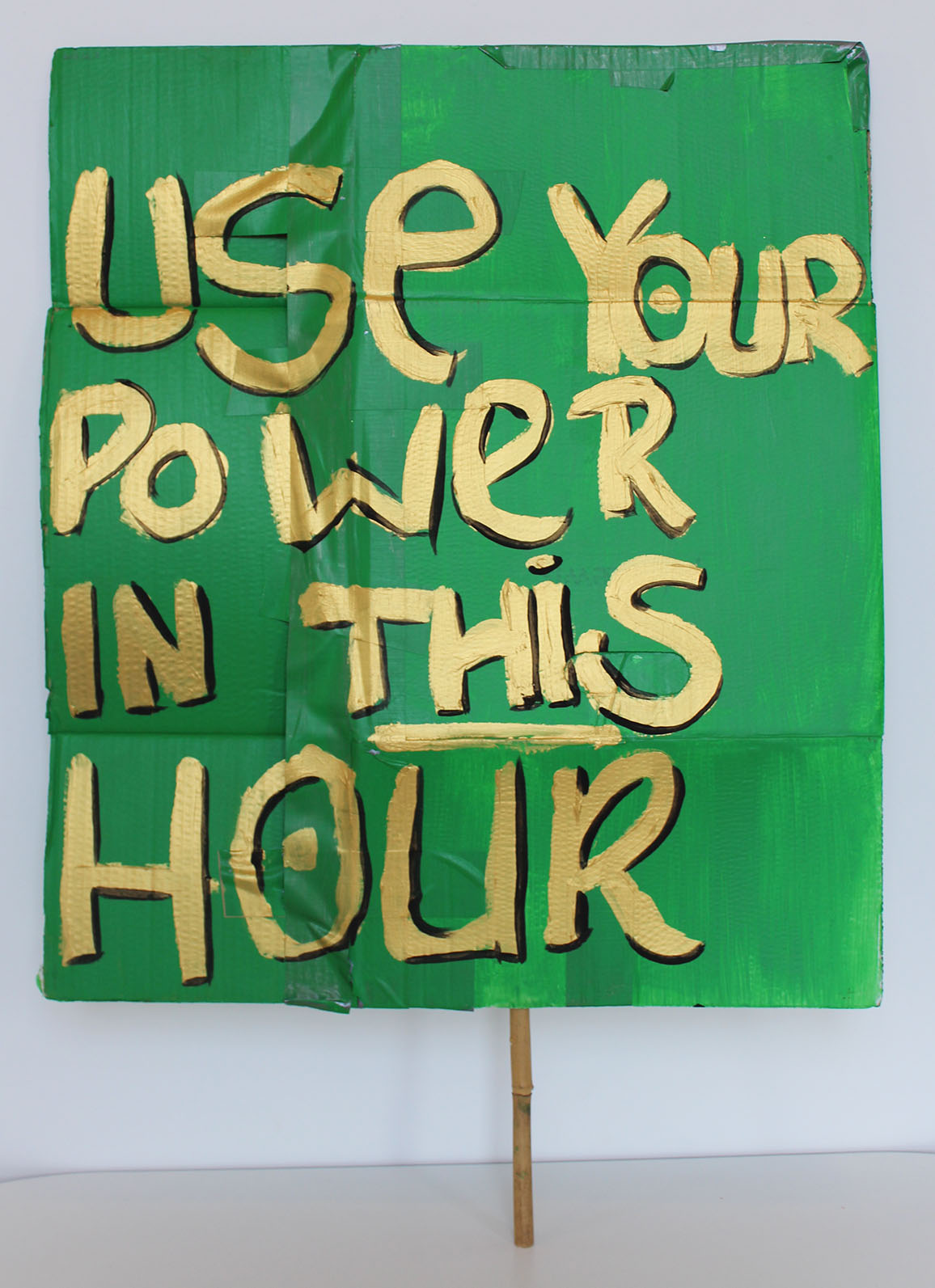 This placard was made by women at Greenock Prison in 2018 as part of a Glasgow Women’s Library partnership project to mark 100 years since (some) women in Britain were given the vote. 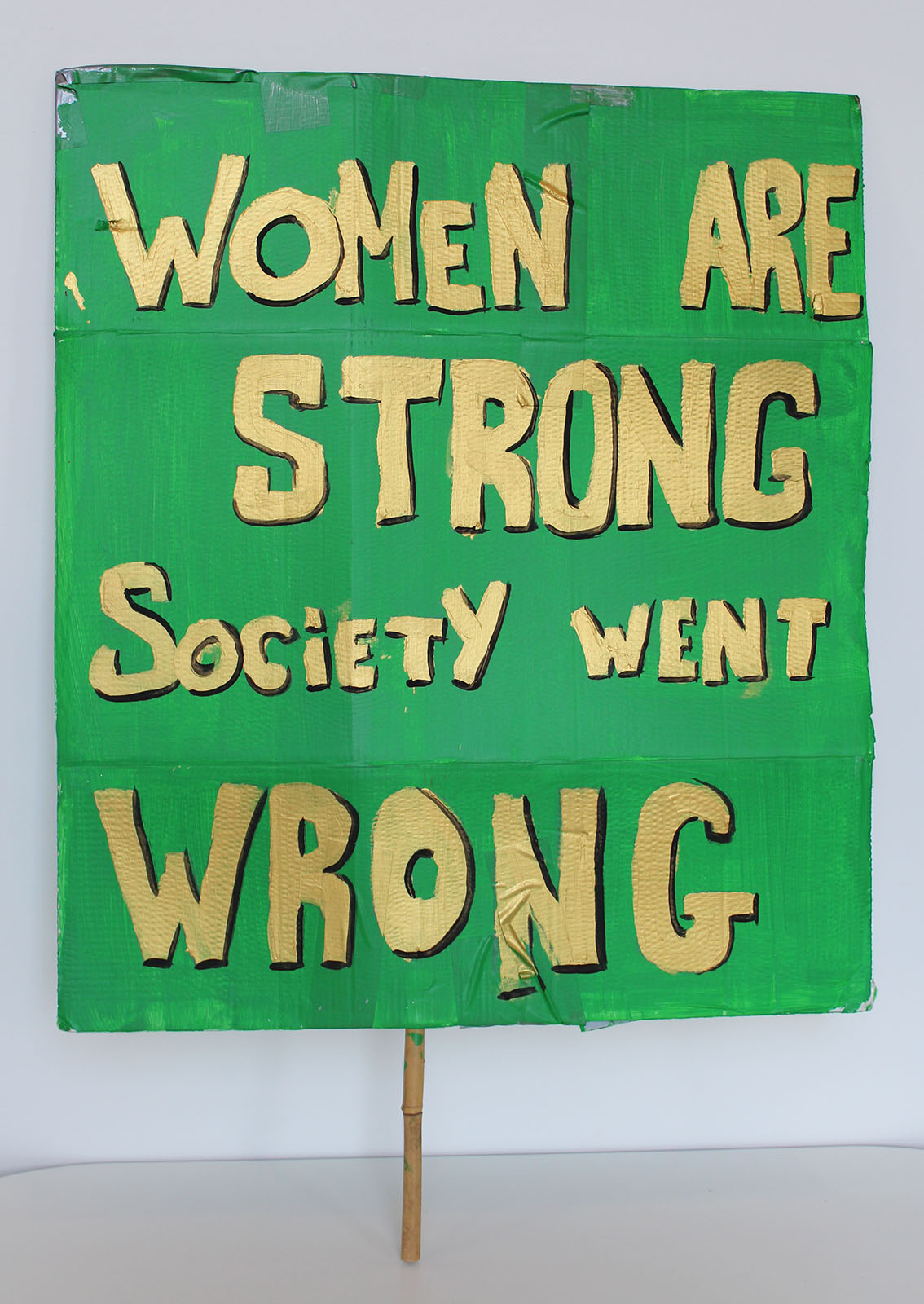 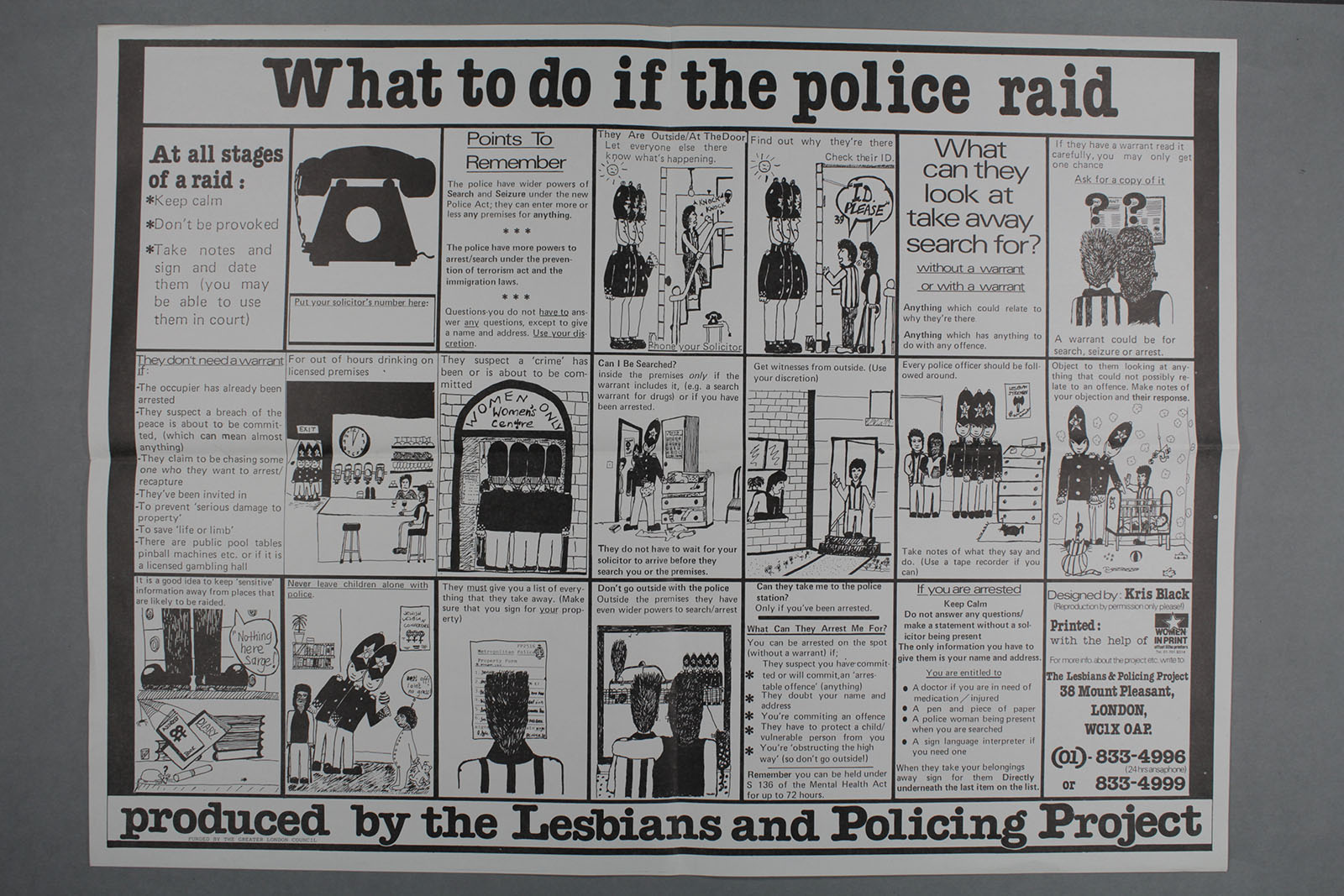 What to do if the police raid (English version), LESPOP, Lesbians and Policing Project poster, designed by Kris Black, c. 1985

The Lesbian and Policing Project (LESPOP) helped lesbians to understand their legal rights - as victims or if they were accused of criminal activity.

These posters were for women in the immigration system, offering them information and advice about dealing with the police. 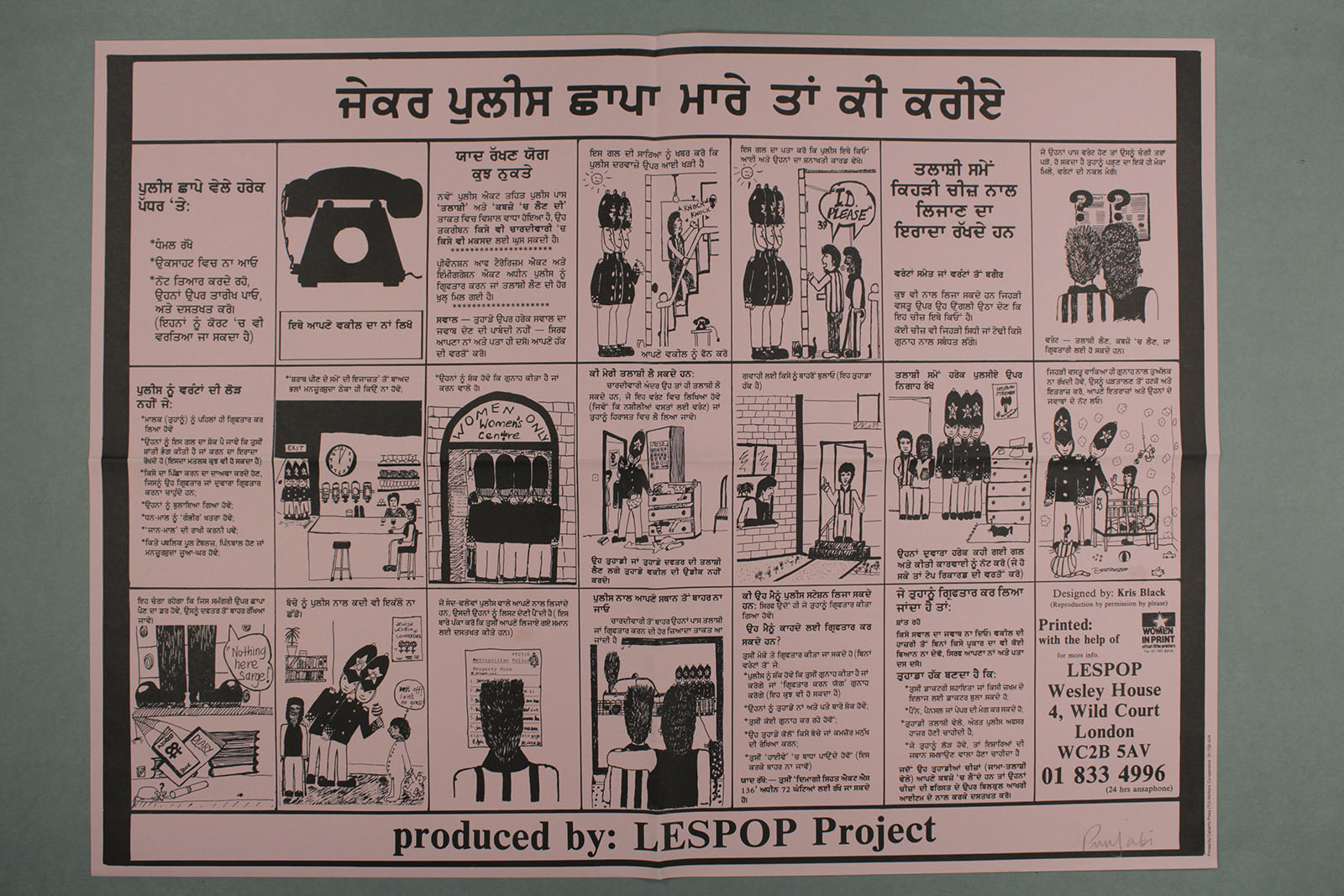 What to do if the police raid (punjabi version) 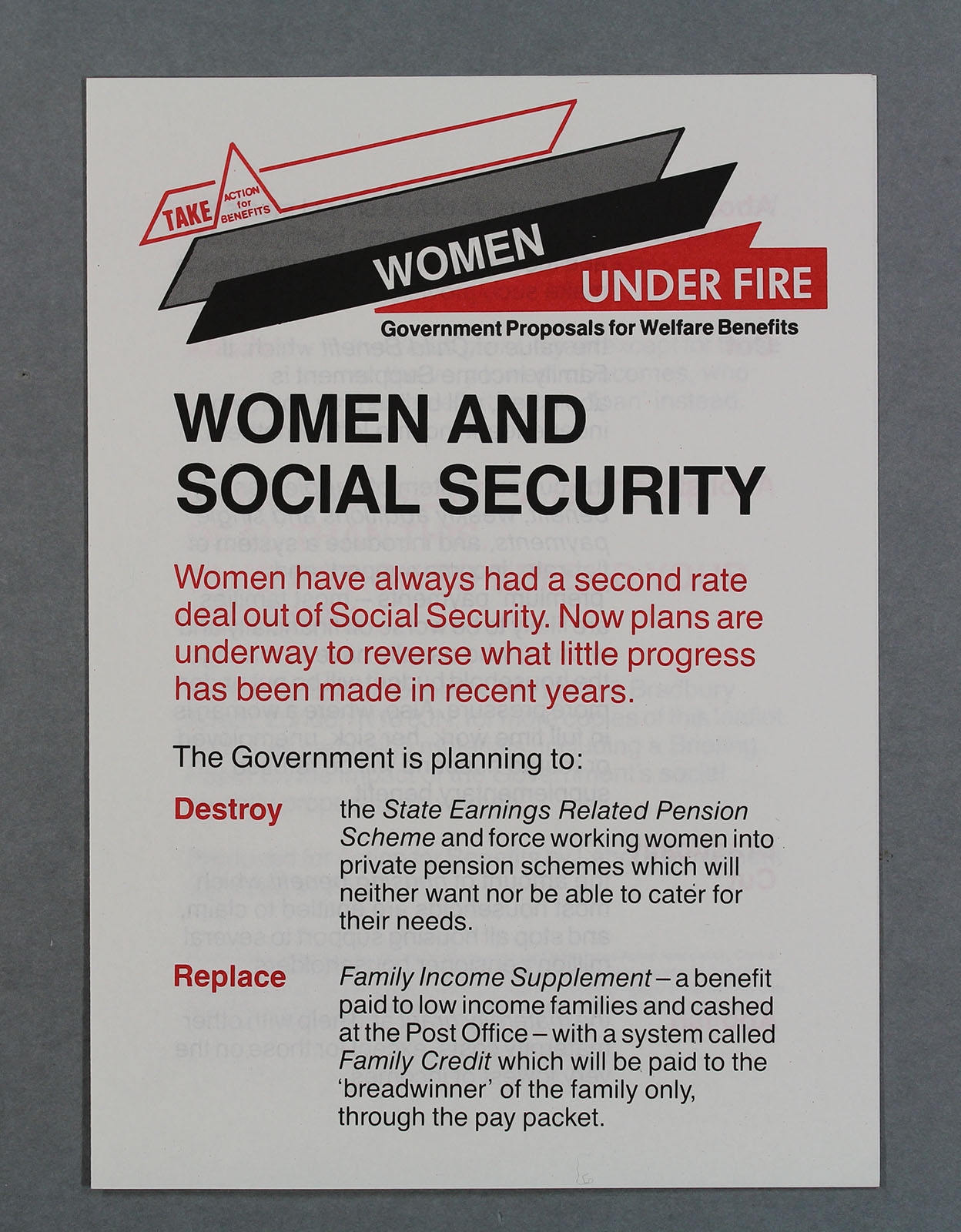 Women and Social Security Booklet by Action for Benefits by the Labour Movement (n.d.)

Women are always hit harder by changes to benefits. This leaflet explains the Conservative government’s proposed cuts and their unequal impact on women.

Women are twice as dependent on social security as men. Since the government’s austerity policy started in 2010, 86% of government savings have come from social security and tax credits. Women rely more on these benefits and experience greater inequality as a result of these cuts. 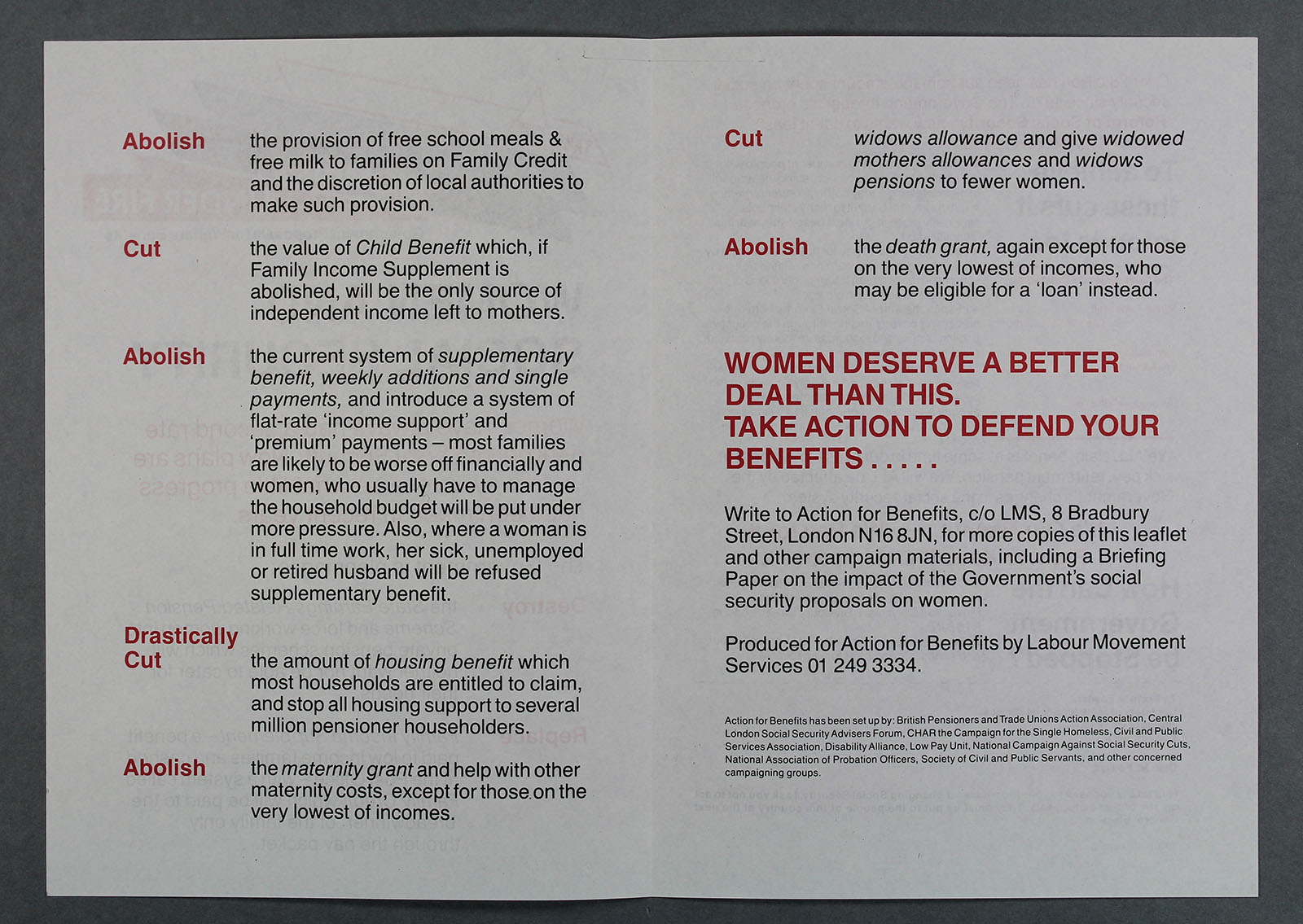 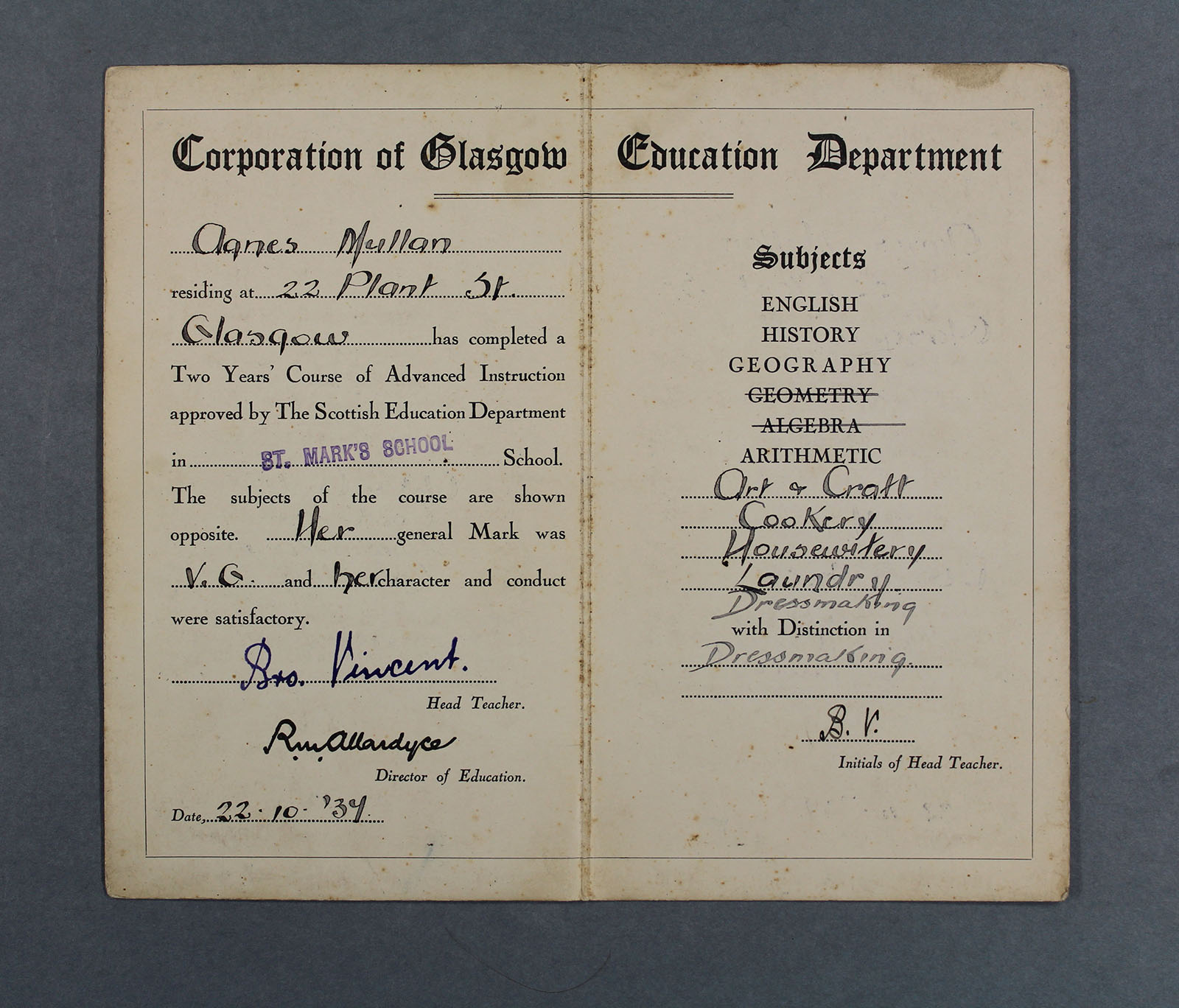 “Agnes's report brings memories of not being allowed to do Physics and Chemistry but being forced to do domestic science and shorthand and typing as I was a girl! Lucky to have had a dad who fought for me to do sciences instead.” Beverly McFarlane‏

Young women are still less likely to study and work in science, technology, engineering and maths than young men. While girls and boys are now taught the same subjects at school, stereotypes are everywhere in our society and we are still trapped by ideas of ‘men’s work’ and ‘women’s work’. 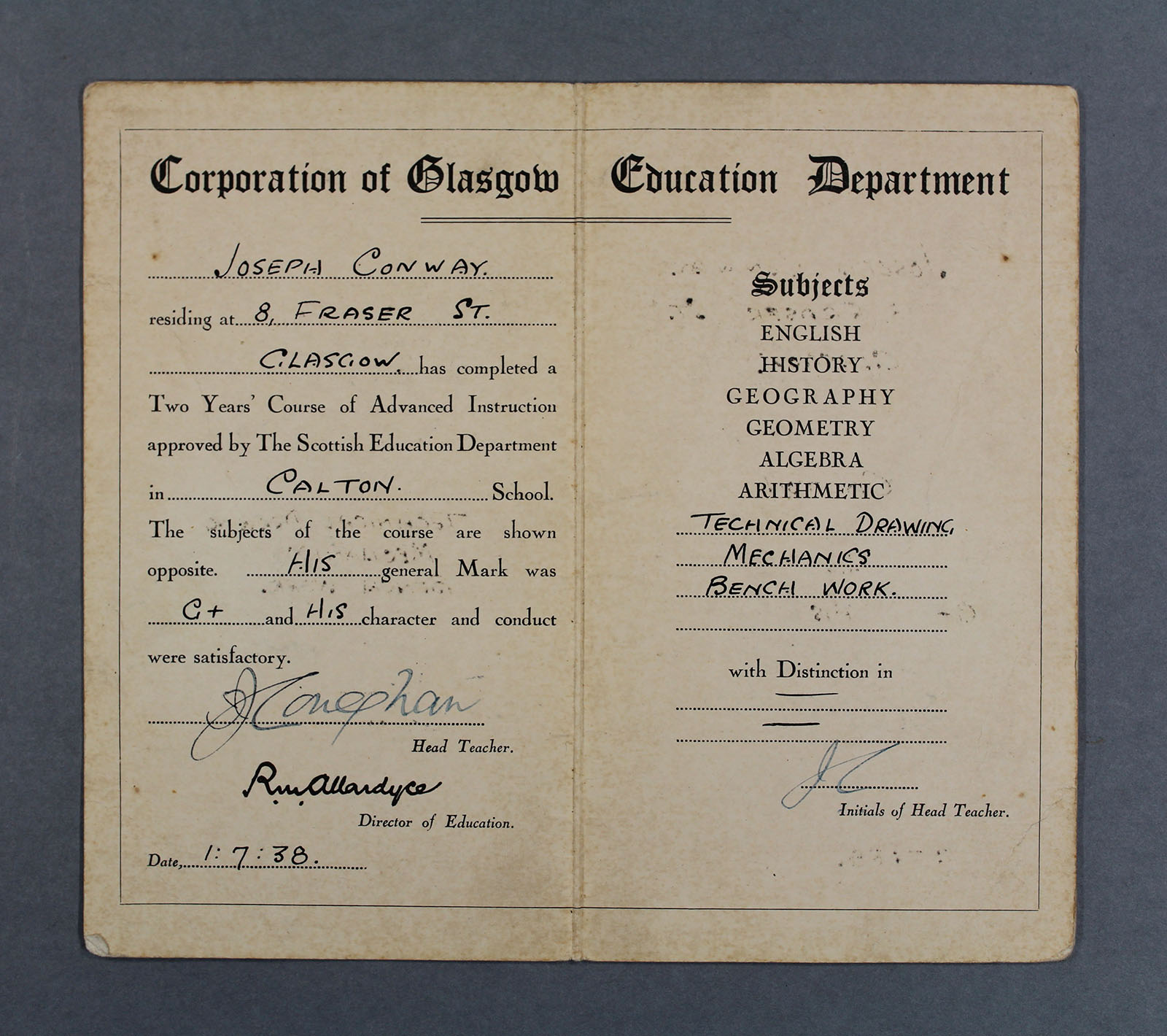 A group of teachers organised this festival to discuss how to teach in a non-sexist way. They wanted to challenge stereotypes, fight inequalities in the education system and help build a more equal society. 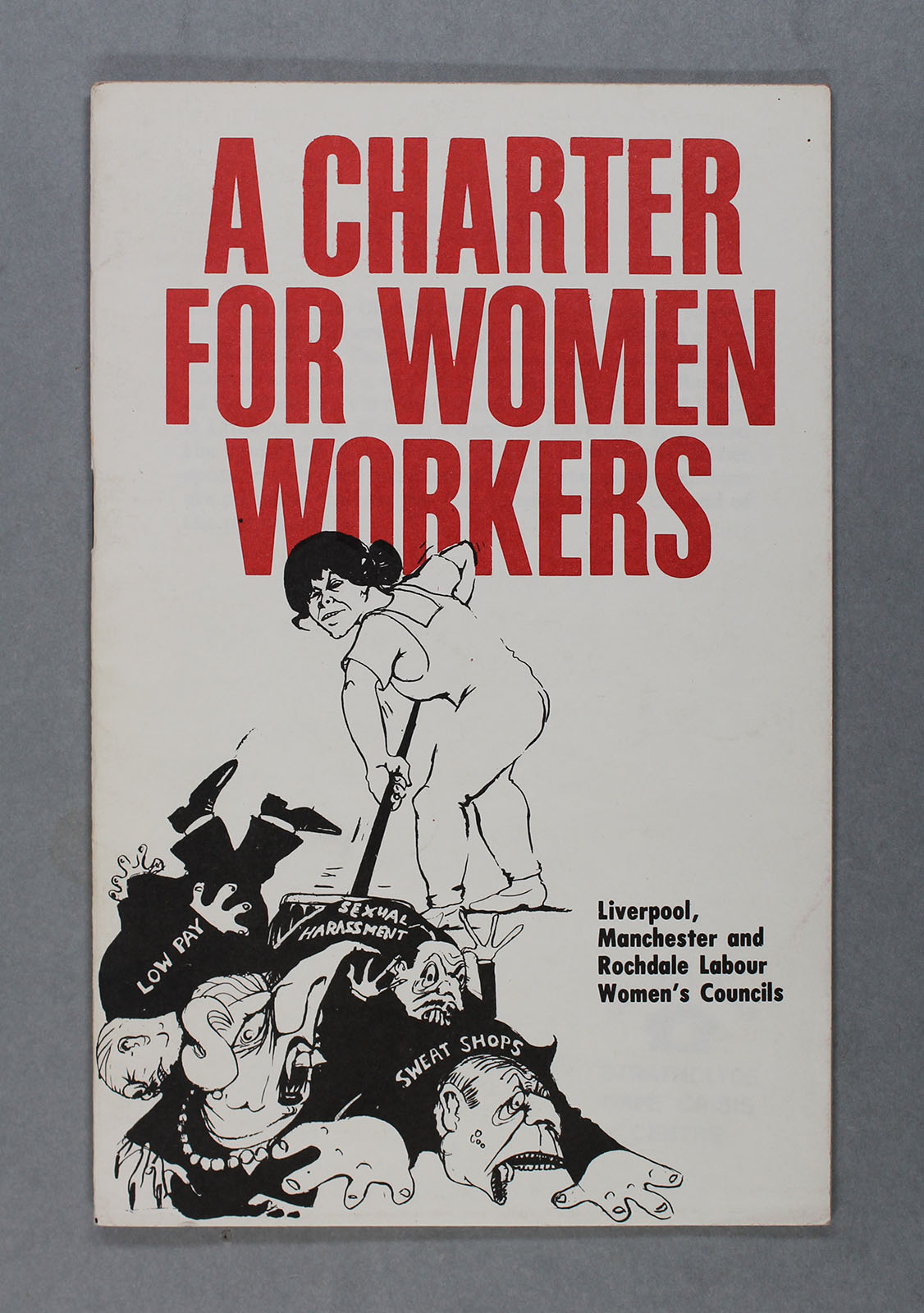 Women in the Labour movement created this charter for the Trade Union movement to bring women’s rights to the forefront in their activism.

‘The labour movement must be committed to fighting for a job for every woman who wants to work, for equal pay, and for decent conditions. This is why we need a Charter For Women Workers…we believe that many more women will be drawn into the struggle to transform the trade unions into democratic, fighting organisations…(which) will unite male and female workers in a common struggle against the bosses and their system’.

In 1985, the Equal Pay Amendment Act gave women the right to be paid the same as men for work of equal value. Today, women are still fighting for equal pay and conditions. 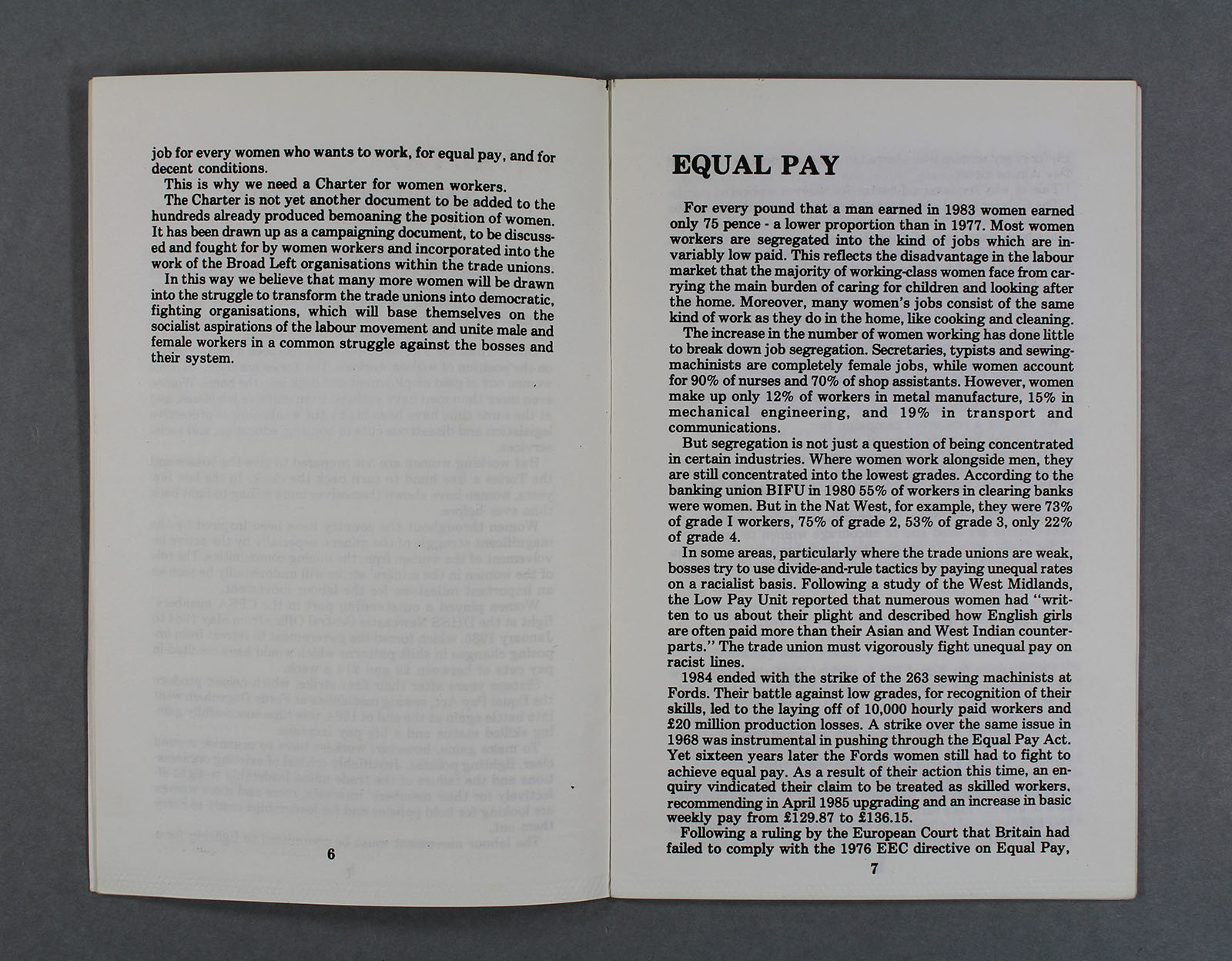 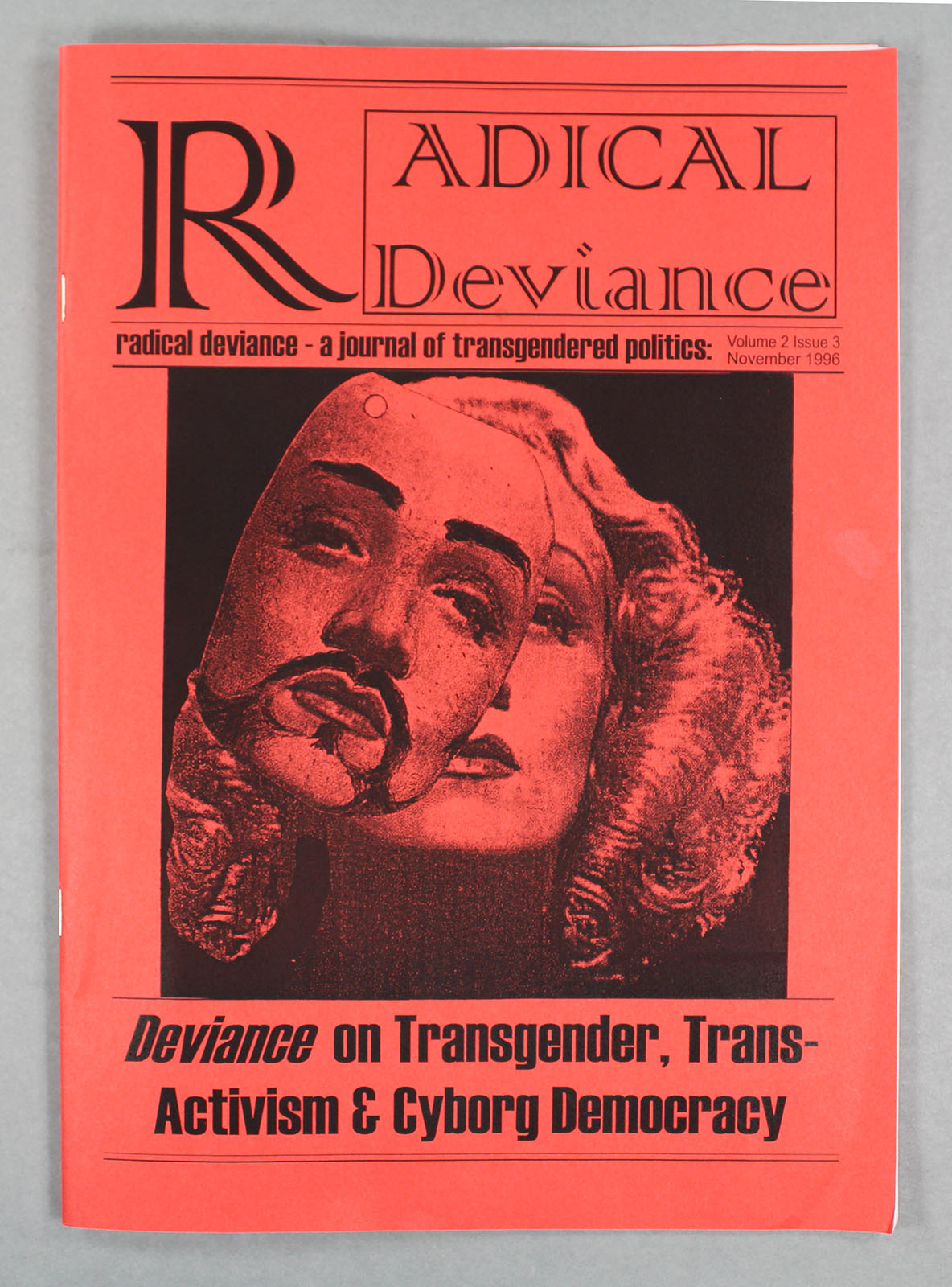 This article sums up changes to the law around the world in 1996, as they impact trans people. As the magazine explains:

“In many parts of the world the law is in a state of flux. This is partly as a result of increased campaigning and adjustments to political constitutions in a politically changing world, increased understanding of the issues by the general public and an increased public stance by trans people." 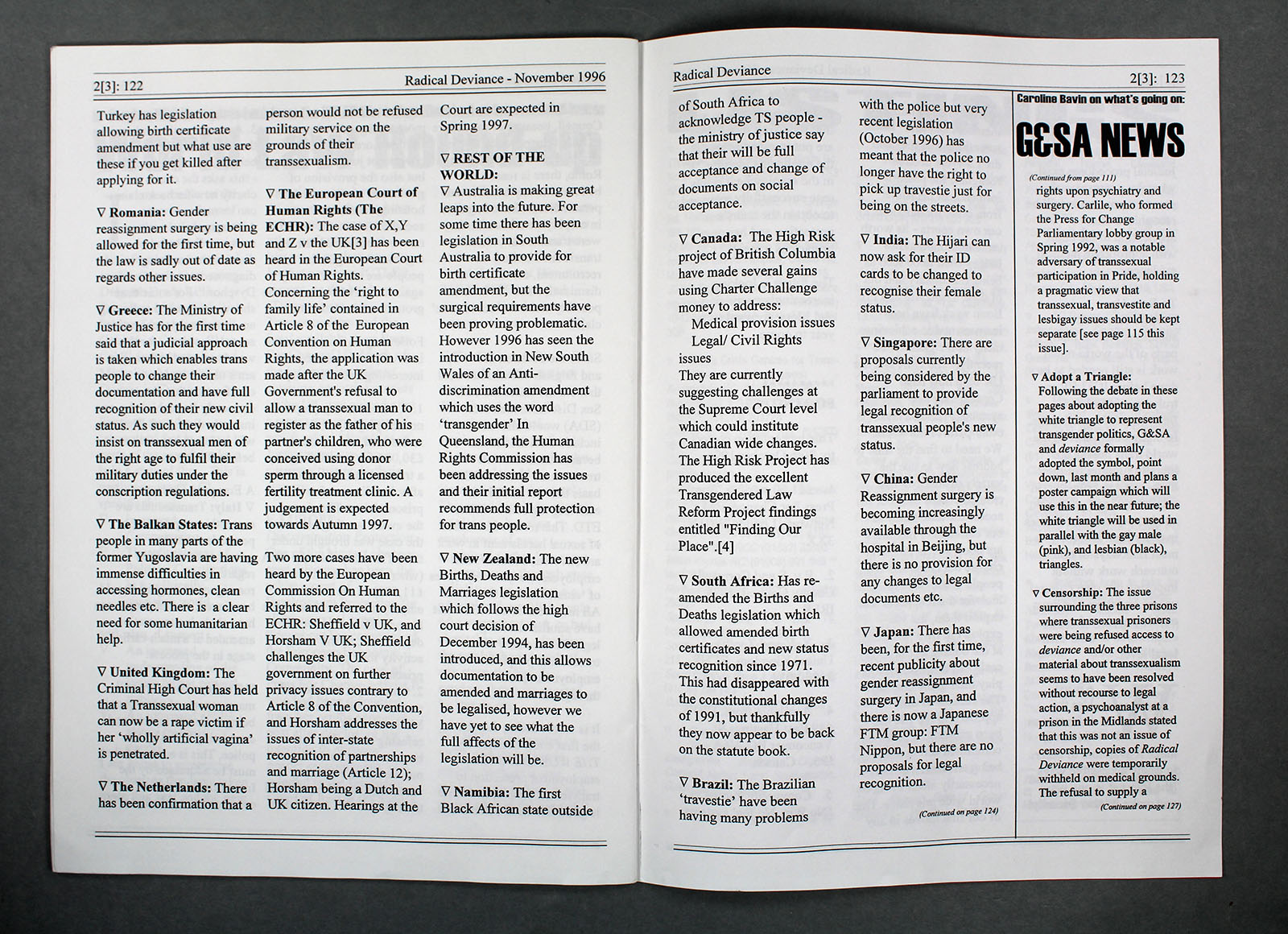 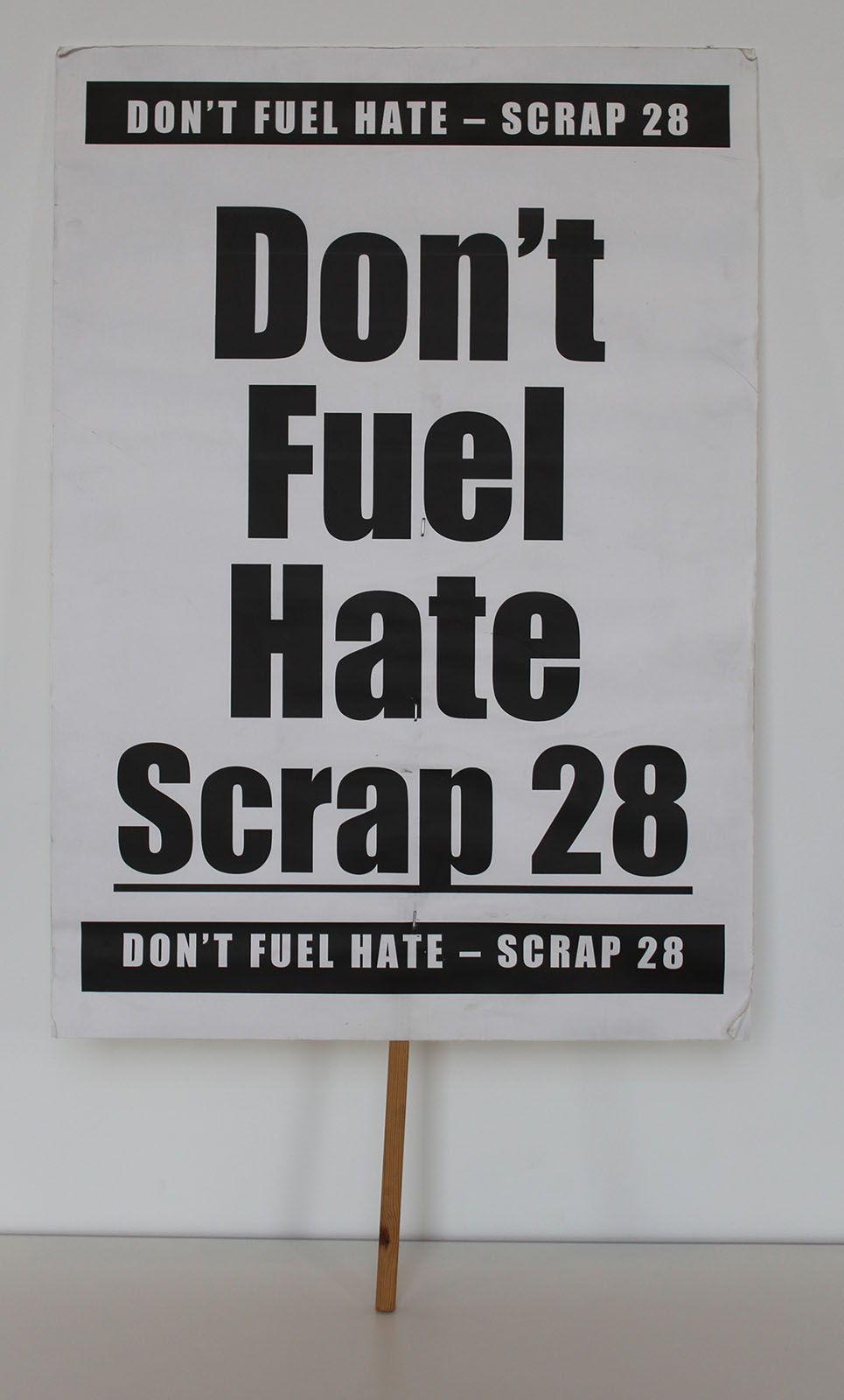 Section 28 was a law brought in by Margaret Thatcher’s Conservative government in 1988 which said that local authorities,

”…shallnot intentionally promote homosexuality or publish material with the intention of promoting homosexuality" or "promote the teaching…of the acceptability of homosexuality as a pretended family relationship."

The fight against Section 28 was one of the most fiercely-fought lesbian and gay rights campaigns in British history. The new Scottish Government(then the Scottish Executive) abolished Section 28 in 2000 and the UK Labour government followed in 2003.

This reminds me of picketing the Mitchell Library as a #LesbianAvenger as the Pink Paper, a vital free mag for LGBT people was only available on request due to #Section28  - Adele Patrick

Section 28 was in place my whole time at school, so my memory is a memory of absence: of LGB people and identities going (almost) completely unmentioned.  - Katie Birkwood

I finished school a year before it was repealed in Scotland. I remember crying on a dark street in my last year at school because I was so alone. My classmates had discovered I'd kissed a girl and had all distanced themselves from me. Overnight, I lost all my 'friends'.  - Fiona Robertson

Section 28 - seemed to me at the time the only effect it would have would be to promote homosexuality... - Anonymous

I recall that one Tuesday night in 1988 the three lesbians who had abseiled into the House of Lords in protest against Clause 28 came to the lesbian social group Sappho to recount their exploits. It was a fantastic night and the Chepstow pub was packed. Seemed like a turning point.  - Kathryn Williams

This is a fabulous object! I was 14 when section 28 was enacted, it impacted directly upon me, but at the time I was completely unaware of it. I knew that no one talked about people like me, but I didn’t know why. I only found out later about my ‘inalienable right to be gay’! - Rob 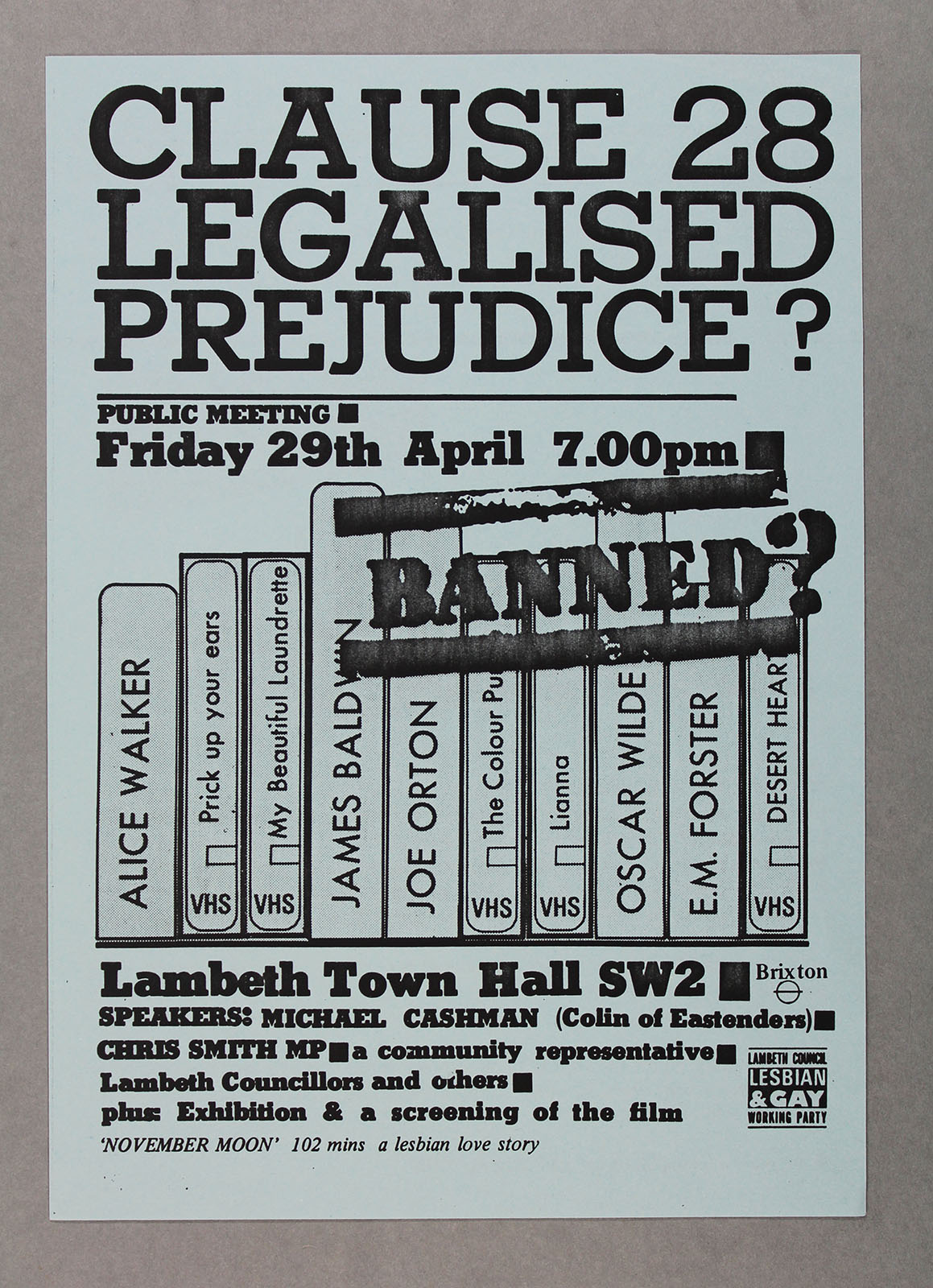 March for Equality and Diversity Poster by Sue John 2000 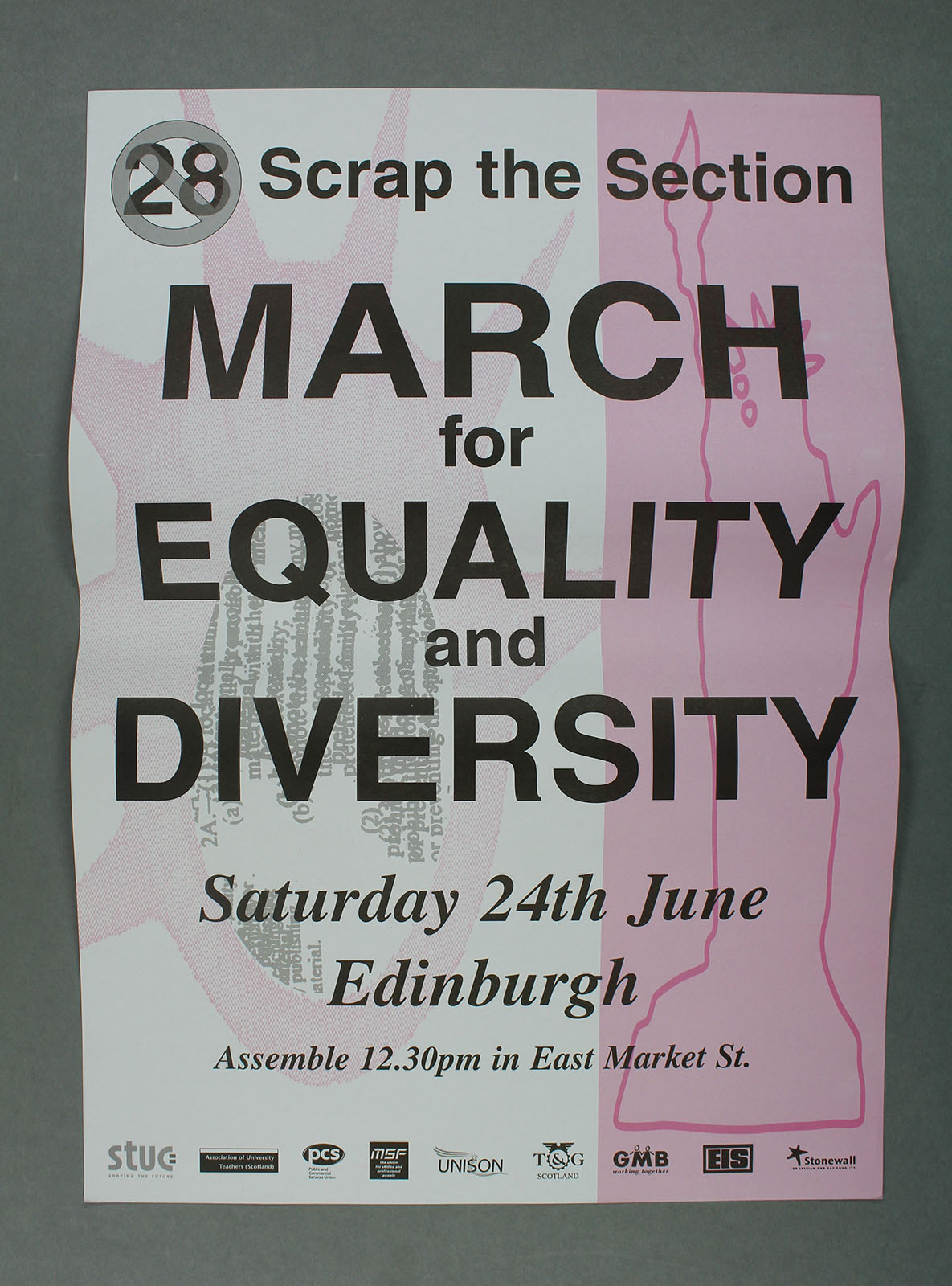 March for Equality and Diversity Poster by Sue John 2000

This object was produced in 2000 when the Scottish Government went to repeal Section 28.

I made this poster! Elements of it were from my Glasgow School of Art Degree Show. I was Chair of the West of Scotland Scrap the Section Campaign and we met every Wednesday evening in the old LGBT Centre in Dixon Street, Glasgow. It was tiring! - Sue John

From Wednesday 5th January 2022, GWL will operate with extended opening hours.
Our latest hours and more information about our phased re-opening are available here Dismiss