Women are presented with images and objects which reflect society’s expectations of our behaviours –  the roles we are expected to fulfill at home and how we are expected to look, be and behave – which obstruct our capacity to define our own identities and which reinforce and sustain inequality. 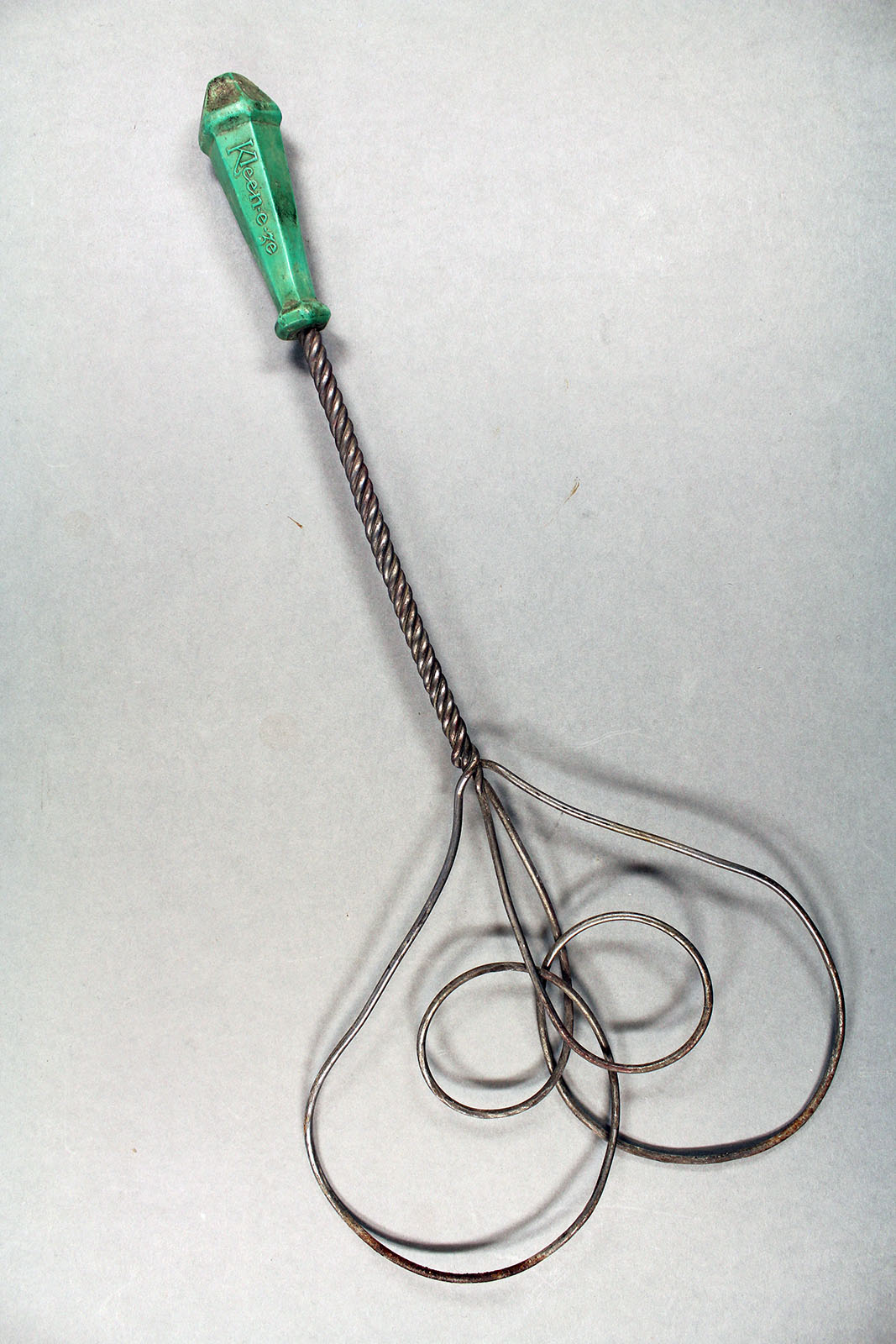 Women have always been expected to carry the burden of housework and raising children, often while doing paid work too. For many of our mothers and grandmothers, life was a long list of hard, physical jobs to keep the home clean and everyone fed.

My mother and grandmother had one. Think handle was also wicker (sore to grip)… Rugs were hung on the washing line and thrashed. Think that made it officially spring. - Ken McKinlay

My granny had a wicker one. Also used as a weapon I think only by her grandkids but possibly her too! - Ellie Brennan 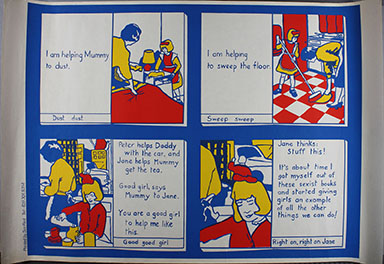 The original ‘Jane’ character appeared in the Peter and Jane books – a primary school reading scheme which was first published in 1964.

Peter and Jane’s toys, clothes, behaviour and interests were all shaped by their gender. Jane often helped Mum with housework.

I learned to read with books like these where gender stereotypes abound. I wonder what cultural orders the 21stC girl absorbs now? There are different illustrations but is being a "good girl" still a requirement &/or constraint? - Natalie Sirett‏

Memories of domestic science and being taught the 'correct' way to iron knickers as per the Dundee Homecraft Book. It also advised being neat & wearing a clean pinny for 'hubby's' return home. I didn't know the word #sexist but I felt it and quietly thought 'F##k that! - Beverly McFarlane‏

See Red Women’s Workshop was founded by three ex-art students in1974 who wanted to combat the negative images of women in advertising and the media. 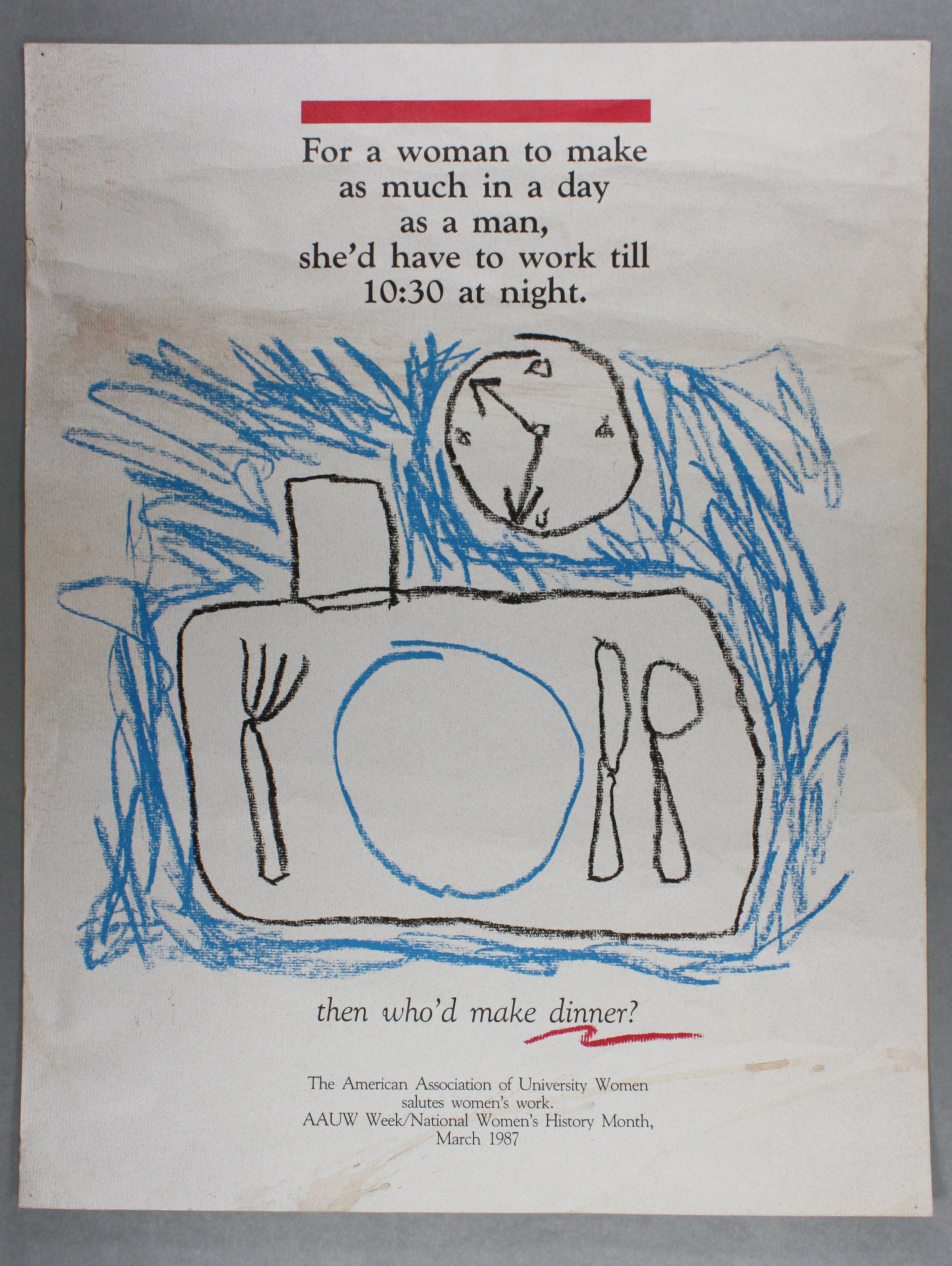 The American Association of University Women’s poster exposes both the pay gap between men and women and the fact that women still do most of the work at home. 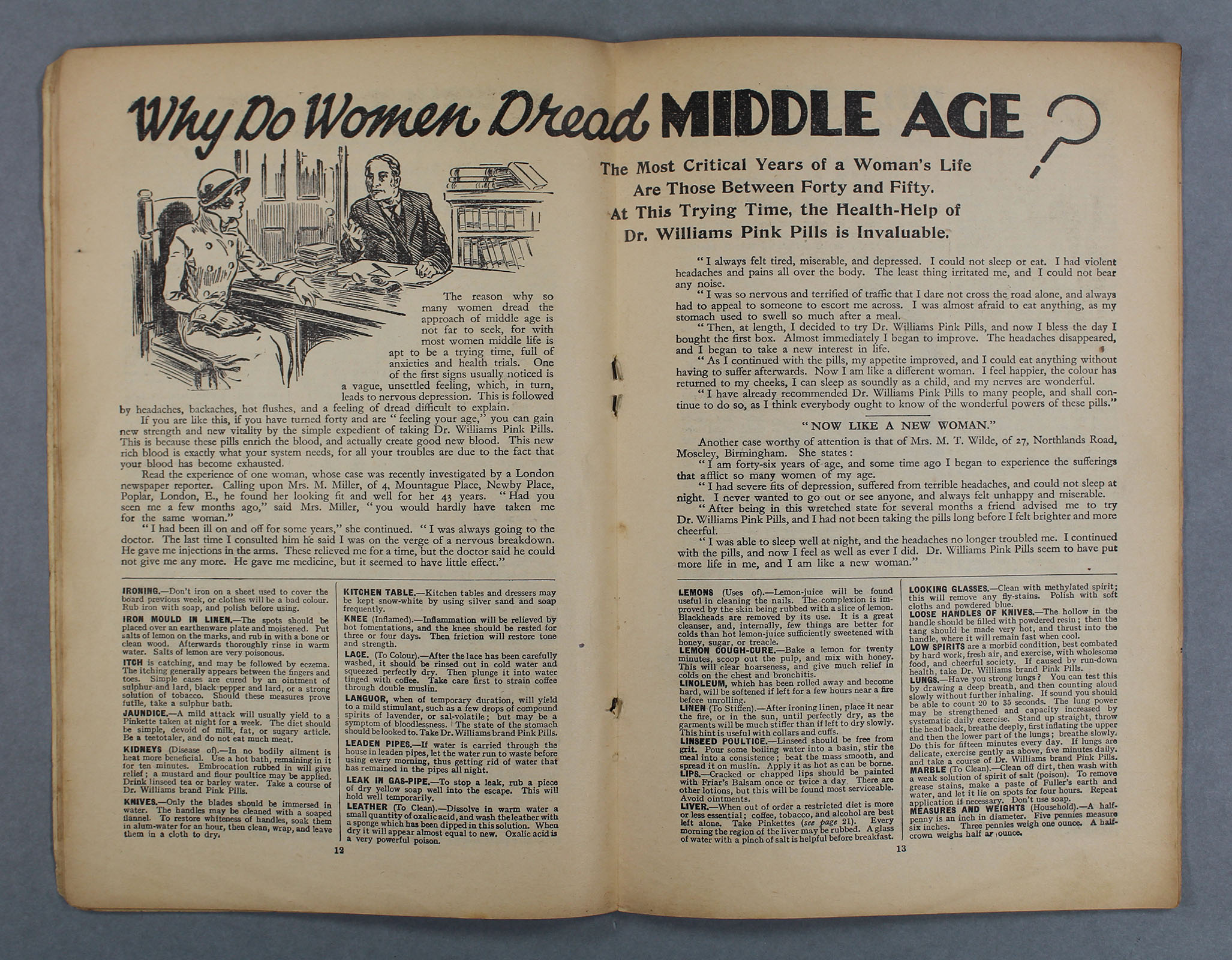 Household Hints magazine offers women a ‘cure’ for middle age and menopause in the shape of Dr. Williams Pink Pills. The magazine describes the ages of 40 to 50 as full of ‘trials’ ‘anxieties’ ‘a feeling of dread’ and ‘nervous depression’. Menopause and middle age can be ‘solved’ by taking pills.

That actually we haven't moved that far on from Pink Pills. Except now they contain hyaluronic acid and provitamins and we add them to the surface rather than swallowing them! - Lucy McCaul

‘...she is fit and well at 43 years of age.’ The implication being that this is unusual. To be written off aged 43 is scary. - Eilidh Innes

I turned 45 at the weekend. I'm feeling my age but that's because I work full time and have two young children including a very lively toddler. I didn't dread middle age - I'm only just conceding that I might be middle-aged...

Cures for the mental and physical decline of the ageing female. Shamed & shameful creature that she is, poor dear. It might be a 1930s object but these kind of attitudes are still running deep. - Natalie Sirett 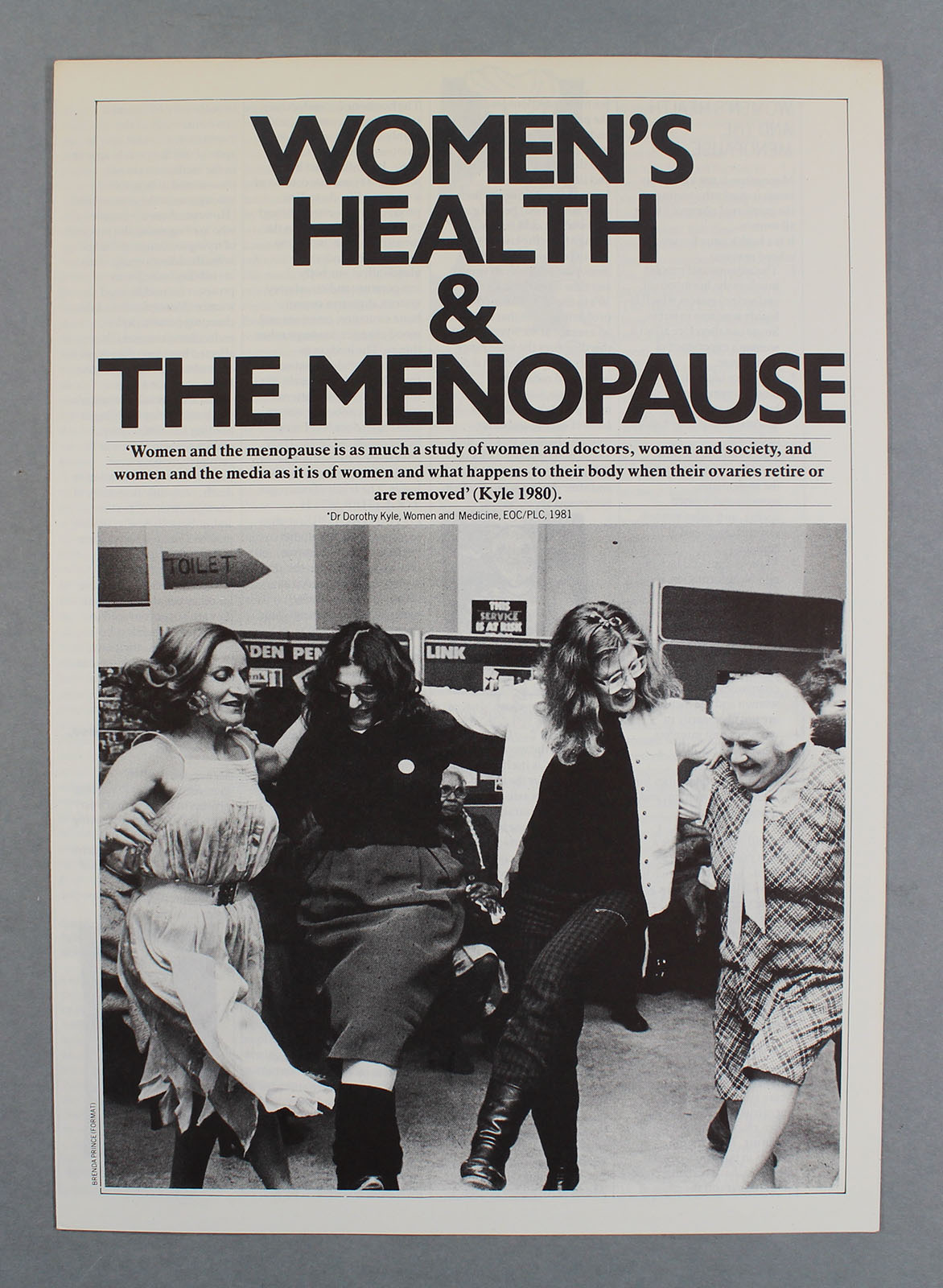 Women from the Menopause Collective wanted more support, awareness and research relating to menopause. They wanted to

‘De-medicalise menopause and reinstate it as a natural event at the end of menstruation of relevance to all women.’

The menopause still carries huge stigma. A 2018 BBC survey showed that 70% of women don’t tell their employer that they are experiencing menopause symptoms even though 41% say that the menopause is affecting their job. 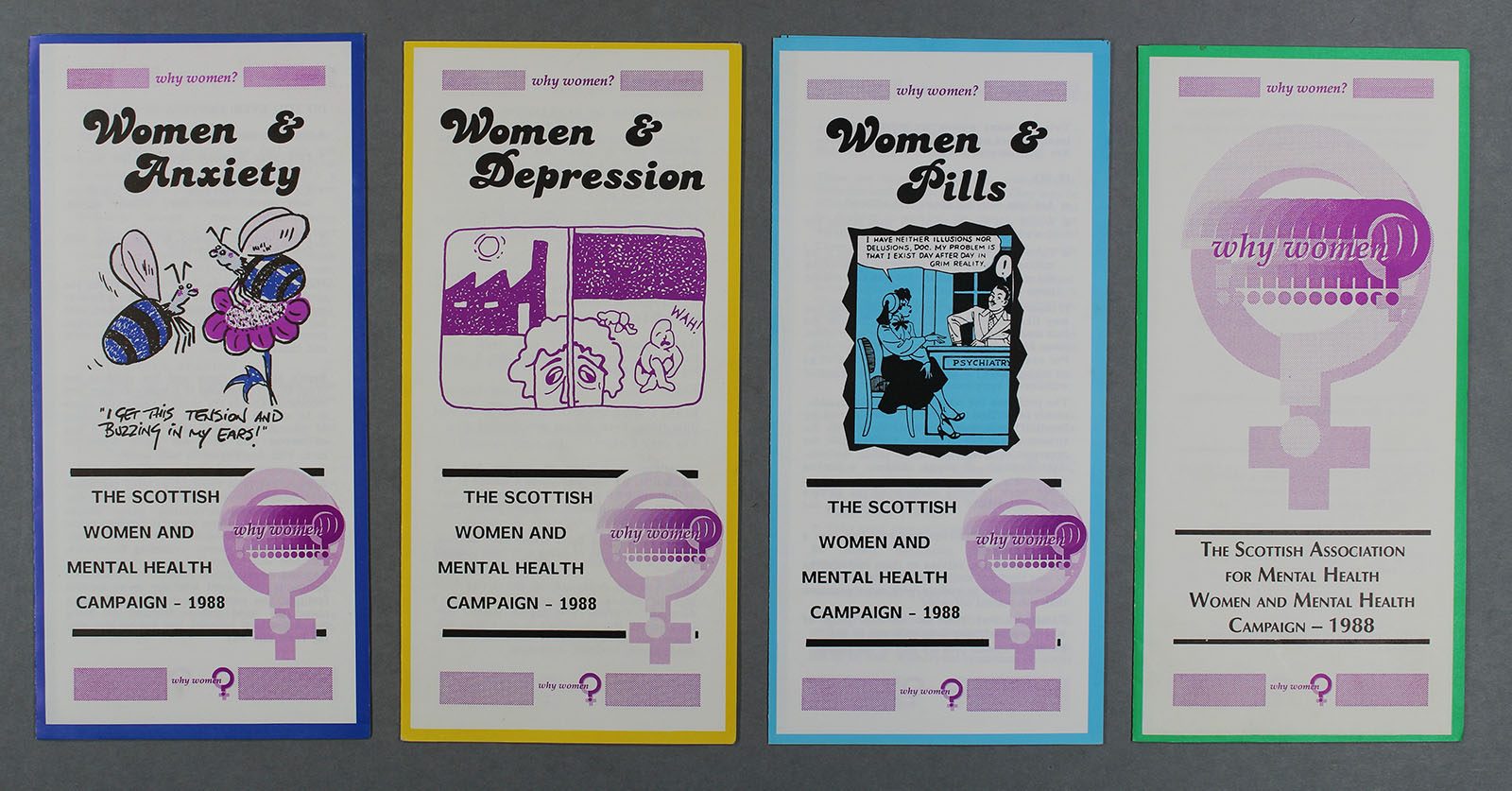 Women’s experience of inequality - poverty, violence, racism, ageism, attitudes to women’s sexuality and the burden of juggling work, home and family – means that they are more likely to experience mental health problems.

These leaflets provided vital information for women about mental health so that they could make clear choices about support, medication and self-help. 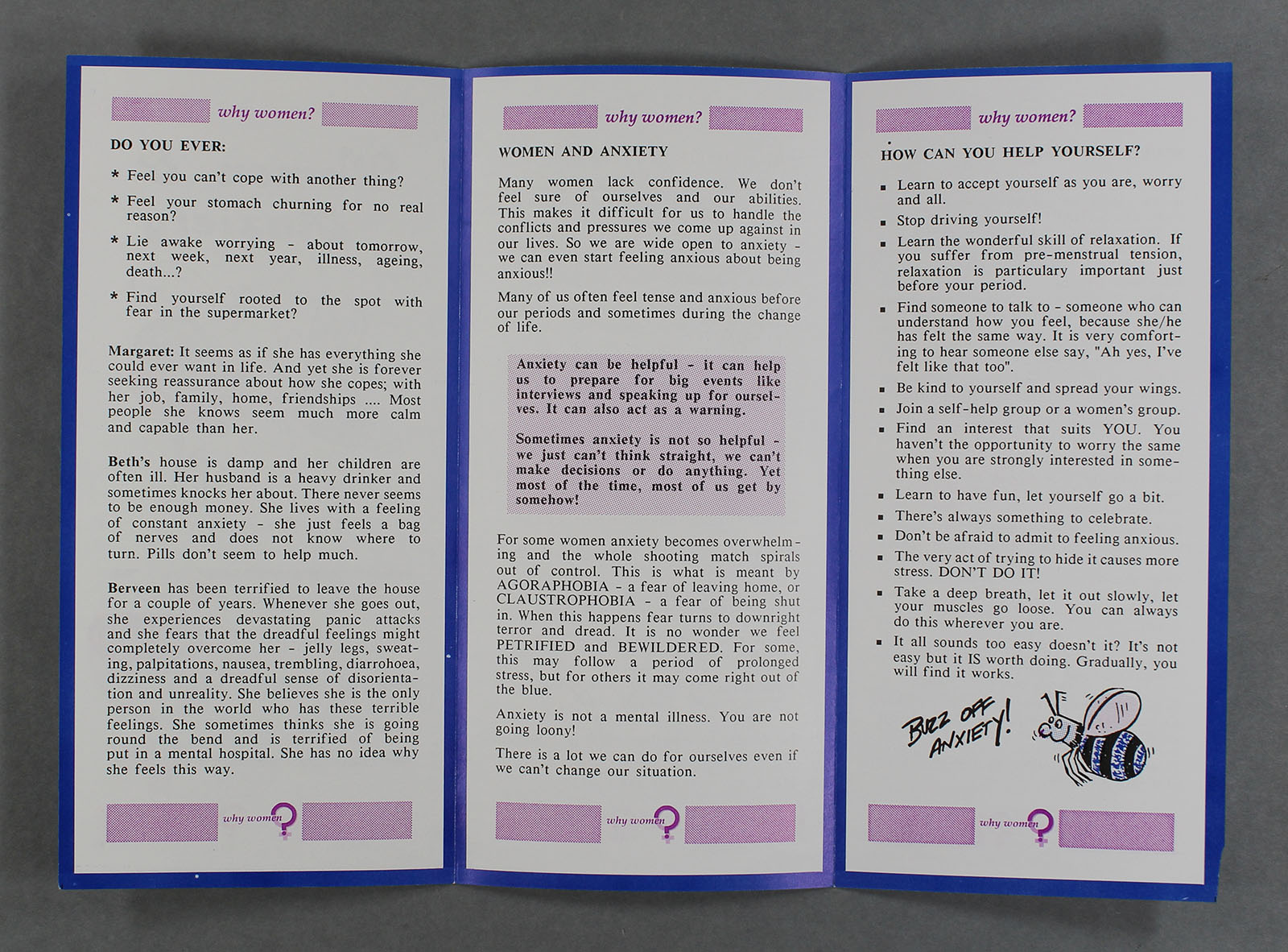