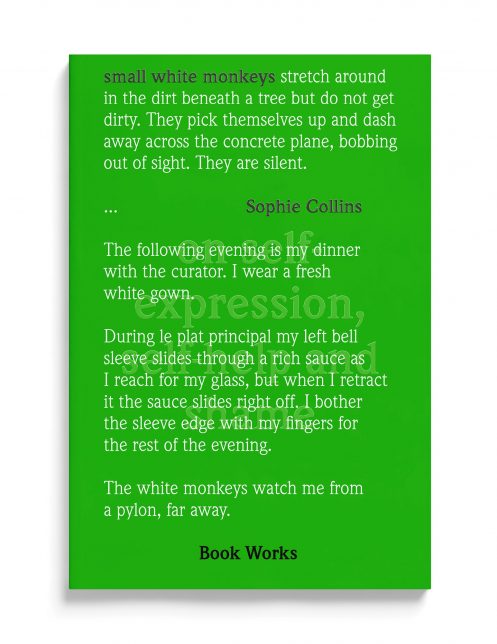 Glasgow Women’s Library collaborated with BookWorks to host a You Must Locate a Fantasy commission. The commission was offered to Sophie Collins and the outcome was the publication small white monkeys a fragmented essay, including poems and images, on self-expression, self-help and shame. Beginning with the image of the small white monkeys, the text examines the author’s relationship with shame through a series of short studies on, amongst other things, cats, hair as a metonym for the self in poetry and fiction, and perceptions of sexual violence.

Sophie Collins grew up in North Holland and now lives in Edinburgh. In 2016 her poems were featured in Penguin Modern Poets 1: If I’m Scared We Can’t Win, alongside work by Anne Carson and Emily Berry. She is the editor of Currently & Emotion, an anthology of contemporary poetry translations, also published in 2016, when it was named a Times Literary Supplement Book of the Year by critic Jeremy Noel-Tod who described it as the year’s ‘most generous, intelligent and illuminating anthology’. Her translations of contemporary Dutch poet Lieke Marsman were recently published in Asymptote. She won an Eric Gregory Award for her poetry in 2014. She is currently Assistant Professor of Poetry at Durham University.

small white monkeys was launched at Glasgow Women’s Library, on Saturday 18 November, following a day of talks, readings and performances on shame and self-expression.