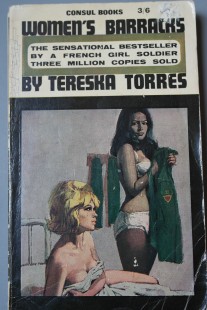 Pulp Queens was a GWL Project held in Summer 2016, to highlight and celebrate the wonderful collection of pulp fiction novels in GWL’s archives. We held a series of workshops looking at some of the classic – and not so classic – texts, and an exhibition of the pleasures of pulp.

In the run up to the Pulp Queens workshops on 4th August and the exhibition of our wonderful pulp fiction collection, we’re going to be posting a few reviews of some of the books in our archive and information about the women who wrote them.

Pulp fiction was really popular during the mid-twentieth century and some of its authors wrote a book a week, often under several pseudonyms, making it a real exercise in detective work to try and track them down and find out who the authors really were. Pulp got its name due to the cheap paper that the books and magazines were printed on. They were affordable, short and thrilling – escapist fiction designed to appeal to a large audience who didn’t generally read for pleasure. They sold in huge quantities in places that books weren’t normally found – drug stores, grocery stores and train and bus stations.

Although the paper inside the covers was cheap, the covers themselves were often lurid and brightly coloured, with pictures of scantily-clad women – who looked as though they were either in trouble or they were trouble. The covers also contained titillating blurbs to tease the reader about what might lie in between the covers:

“What had happened between Ellen and Paul had all been so beautiful until they discovered Sally had been watching…How much had she seen?”

BURDEN OF GUILT by Francine Spears 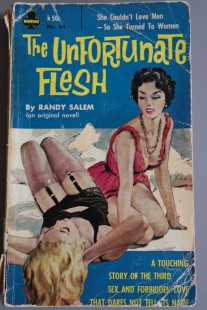 The pulps had to be titillating and thrilling enough for readers to want to buy them in their millions, but they also had to be moral enough to get past the postal censors, since that was how a lot of pulp fiction was distributed. Publishers brought out several dozen titles a  month and if one book in the shipment failed the censor’s inspection, then all the titles in the shipment would be sent back to the publishers.

It’s been an absolute joy reading some of the classics (and not so classics) from our collection. How can I resist titles such as WOMEN’S BARRACKS, THE UNFORTUNATE FLESH, A STRANGER IN MY GRAVE, THERE’S ONE IN EVERY TOWN, THE DEMANDS OF THE FLESH, THE LIFE AND DEATH OF THE WICKED LADY SKELTON or THE DOCTOR IS A LADY? We have most of the subgenres covered – crime, romance, lesbian, historical, horror, science fiction. I say ‘most’ because if you ever come across any pulp fiction westerns written by women, we’d love to have one.

Whether you’re familiar with the pulps or completely new to them, we hope that the exhibition and the workshops will be entertaining, informative and deliciously pulpy. Check back here on the blog for some reviews over the next few weeks.