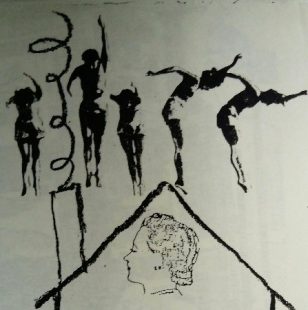 Placement student, Ellen Embleton, writes about the collections she worked on during her 2 week cataloguing placement at the library.

I was thrilled to learn that during my cataloguing placement I would be working on a collection with strong links to Glasgow Women’s Library’s history. As a fan of the Library I knew that it had had many homes over the years; Trongate, the Mitchell Library, Landressy Street. However, what I did not know is that the Library was developed out of a broad arts based organisation established in the late 1980s called Women in Profile. Working through the collection of Women in Profile I had access to information about the range of events they were involved in, as well as to the diverse and varied records they created, from newsletters to financial reports to posters to t-shirts and much, much more.

Having had a leaf through some of the Newsletters in the collection (and with thanks to GWL’s website!) I discovered that Women in Profile (WIP) was set up in 1987 upon the announcement that Glasgow would hold the European City of Culture status in 1990. The aim of the group was to promote women’s achievements in the arts during this celebration in order to ensure the focus was not solely on men. In the words of Rachael Harris, a Glasgow School of Art Graduate who was involved in the work of Women in Profile, “Women in Profile aims to help ensure that extra funds brought to Glasgow by virtue of its City of Culture accolade, will be invested in on-going projects which are relevant to the city’s residents, with an emphasis on redressing the imbalance of opportunities [between men and women].”  Women in Profile ran a season of events, workshops, exhibitions and activities that aimed to support women interested in the arts both in the run up and during the year of 1990. They ran an “Agenda’s for Change Conference”, which aimed to draw women together locally, nationally and internationally to create a forum to network new ideas on women’s arts; they ran “Hertake” in conjunction with Glasgow Film and Video, an international women’s film festival (the first of its kind in Glasgow), as well as creating their own Annual and continually publishing newsletters and leaflets that kept women up to date with their movements and encouraged them to get involved.

Women in Profile’s largest and most ambitious project was the creation of a Womanhouse in Glasgow’s Castlemilk district. The scale of this project is clearly reflected in the vast quantity of records created over the years of its existence, amounting to three boxes out of the six of the overall collection. The idea was proposed by Adele Patrick, cofounder of Women in Profile and Glasgow Women’s Library, early on at a Women in Profile meeting in 1988. Two years of planning, meetings, funding applications and gathering of support followed until a group of artists, headed by Rachael Harris, Julie Roberts and Cathy Wilkes, were granted access to a four storey tenement building in Glenacre Quadrant, Castlemilk. The Womanhouse was inspired by existing models, such as that begun by artists Judy Chicago and Miriam Shapiro in Los Angeles in the early 1970s. However, the aim of this project emphasised opening up the space for feminist art and opening up the space for local women and children. This focus on accessibility took it in a slightly more political direction than others of its kind.

Glasgow’s Castlemilk district had been created in the 1950s as part of Glasgow’s inner city slum clearances and rehousing schemes. However, by the late eighties it had gained a reputation for its high unemployment and crime rates. It was one of the main areas in which single parent families were housed by authorities. This was, in part, a reason for its choice as the location for the Womanhouse, which hoped to reach as wide a remit of women as possible and tackle the lack of accessibility to arts and culture for those living outside of the city centre.  While female artists from all over the UK were invited to the Womanhouse, they worked beside local women and children in the transformation of the tenement. The bottom floor of the tenement was turned into a crèche area, the top floor was used as office space and the two floors in between were used for the installations. The installations were largely all made in reference to traditional domestic art forms and most referred to female experience within the home and family. For example, Annie Lovejoy’s “A Sense of Purpose” was located in the kitchen and was centred on the “endless cycle” of kitchen duties, while Julie Roberts’ paintings explored the theme of confinement with threatening-looking household objects and Rachael Field and Nenagh Watson’s “On the Throne” saw the bathroom transformed into a lesbian closet. The house was opened to the public as an exhibition at the beginning of September.

After Glasgow’s year as City of Culture had been and gone the members of Women in Profile realised that over the course of their existence they had accumulated an important social archive, and so set up a small volunteer-run library in a shop front in Garnethill where people could visit and access the material. This marked the passing of hands from Women in Profile to Glasgow Women’s Library and the Library’s first official home. The Womanhouse actually outlived Women in Profile, moving from Glenacre Quadrangle to Ardencraig Road where it ran until 1995. Its records were then passed onto the Women’s Library, where they continue to be housed today alongside the rest of Women in Profile’s collection. The projects embarked upon by these women in their effort to provide programmes and services to women across Glasgow are not only fascinating and inspiring, but remain an essential part of what Glasgow Women’s Library represents today.