Lucy Skaer’s Cheiron in Type is a photograph of a damaged copy of ‘Cheiron’ by R.C. Trevelyan published by the Hogarth press and printed in 1927. The book is cast in to a block with melted down tin type.

On her 33rd Birthday, Virginia and Leonard Woolf decided to buy Hogarth House, a printing pres,s and a bulldog that they would name John.  It is not known what happened to the bulldog, but in 1917 a hand press and tray of type was delivered to the Woolf’s at Hogarth House.  Initially thought of as a hobby or therapy to keep Virginia’s mind from her work, it soon became key in allowing the pair to publish their own and their peer’s work without being subjected to editor’s changes and economic decisions.  For Virginia it also changed her approach to language as she began to see words as physical entities in themselves.

Cheiron in Type is a photograph of a damaged copy of ‘Cheiron’ by R.C. Trevelyan published by the Hogarth press and printed in 1927. The book is cast in to a block with melted down tin type.

Lucy Skaer was born in Cambridge, UK. She completed her BA at the Glasgow School of Art.  From 1997 Skaer co-founded the collaborative group Henry Viii’s Wives, and also worked at Transmission gallery in Glasgow, where she had her first solo show in 2000.  In 2003 Skaer was short-listed for the art prize Becks Futures and exhibited at the first Scottish presentation at the Venice Biennale, where she also presented in 2007. Skaer’s solo presentations include a mid-career retrospective at the Fruitmarket Gallery in Edinburgh, ‘The Siege’ at the Chisenhale (both 2008) and a major show at Kunsthalle Basel 2009, for which she was nominated for the Turner Prize. Recent shows include ‘Scene, Hold, Ballast’ at the Sculpture Center New York, ‘Force Justify’, Kunsthalle Vienna and (with collaborator Rosalind Nashashibi) ‘Spies in the House of Art’ at the Metropolitan Museum, New York (all 2012). Skaer lives and works in New York.

For this work, Ashley Cook took inspiration from the Suffragette collection at GWL, specifically the quote ‘We want what men have, it may not be a lot but we want it just the same’, taken from a Suffragette postcard, and imagery drawn from the card game PANKO. 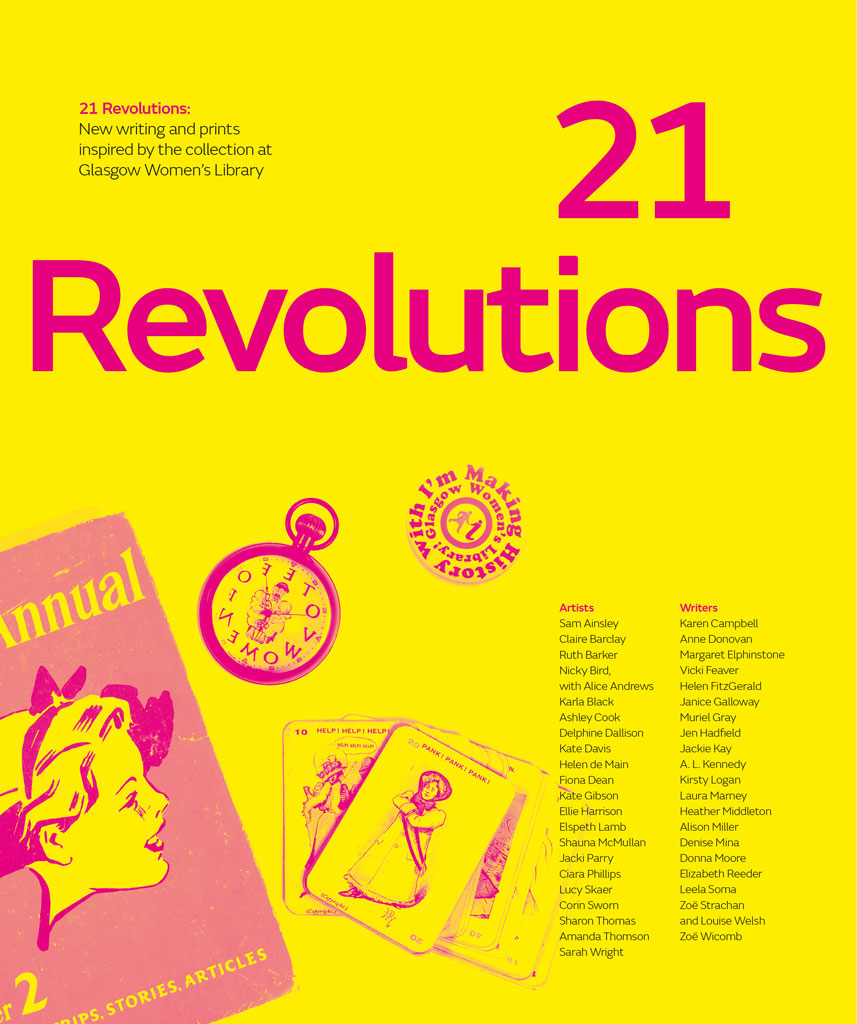 In 2012 Glasgow Women’s Library celebrated its 21st birthday. To mark two decades of life-changing work, GWL commissioned 21 internationally renowned artists and 21 published writers to create new works inspired by our unique museum, archive and library collections. The resulting fine art prints, poems and creative writing have been brought together with the sources that inspired the work in a beautiful, lushly illustrated, enlightening and readable book.