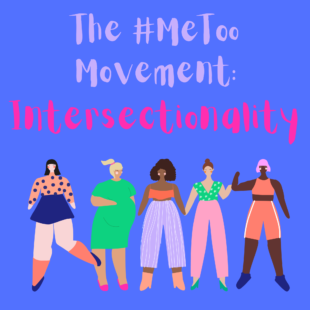 This is my final blog post for the Glasgow Women’s Library on the #MeToo Movement. My last posts have focused specifically on findings from my dissertation research which looked at the opinions and attitudes men and women have towards the #MeToo movement. However, this blog post is not based on my dissertation research as intersectionality did not appear in my findings. Nevertheless, it is an issue that I am curious about and I think is vital to discuss it. So, I have been reading up on intersectionality in relation to the #MeToo movement and that is what I will be discussing today.

Intersectionality was coined by Kimberlé Crenshaw, a leading scholar in Black feminist legal theory, in 1989 to describe the intersecting and overlapping nature of race, class, gender and other characteristics. Specifically, Crenshaw used the term intersectionality to explain the experiences of women of colour in the legal system. For instance, Crenshaw argued that the experience of being black and a woman are not independent of each other, but rather, these two identities interact. To Crenshaw, the experience of non-white women is a combination of racism and sexism and, thus, vastly different to the experiences of white women.

Intersectionality and the #MeToo Movement

In 2017, news broke that the singer R. Kelly had sexually, mentally and physically abused numerous African American women and underage women of colour. This came three months before allegations against Harvey Weinstein (whose victims were mostly white women) emerged in the media. According to Leung and Williams (2019), whilst the media focused on these prominent White women, the non-famous African American women who experienced similar abuse from R. Kelly struggled to make their voices heard. To Leung and Williams, Weinstein’s victims faced gender-related inequality whilst Kelly’s victims faced the overlap of both race and gender inequality. As Tarana Burke stated,

“These families came forward, and were making desperate pleas to get their children back, to get their daughters back home and away from R. Kelly. We’ve been watching them since they came forward in 2017 to try various attempts to get the media attention but it doesn’t take hold, and again I think that goes back to this idea that black girls don’t matter. They don’t matter enough, and it’s proven over and over again.” (in Leung and Williams, 2019)

There are also issues of class when it comes to the #MeToo movement. According to Benedictis, Orgad and Rottenberg (2019), young, White, middle class and conventionally attractive women are the predominant image of sexual abuse victims. Particularly, the young, White, middle class women who is able to effectively use modern social media can call out her perpetrator and gain online support. However, those women who are older or with little access to social media struggle to have their voices heard. Zarkov and Davis (2018) note that for many women who do not have access to social media or who do not have high social status and privilege, the consequences of speaking out are often too great. Furthermore, Benedictis et al (2019) highlighted that working class and older women tend to face condemnation by the media when they do speak out publicly because they do not fit the conventional image of a sexual assault victim.  As Estrich (1987, in Benedictis et al, 2019) pointed out, “gender, race and class shape who speaks about rape in the public arena and how they speak about it” (p.722).

Interestingly, Benedictis et al (2019) found that the Daily Mail’s coverage of the #MeToo movement tended to focus on women who were “desirable and normative, namely, White and celebrity women” (p.731), whilst obscuring working class and non-white women. These researchers argued that the #MeToo movement has reinforced a restricted image of feminism, one in which White, middle/upper class women with considerable social capital dominate the cause.

According to Wafula Strike (2018) and Amy Kavanagh (2019), disabled women’s sexuality remains taboo, with disability perceived as undesirable and sexless. Thus, disabled women do not match the image of women who have experienced sexual violence. However, according to the Office for National Statistics, in 2017 disabled women and women with long term illnesses in England and Wales were twice as likely to experience sexual harassment compared to non-disabled women. Yet, according to Gill and Ogard (2018), disabled women have been overwhelmingly excluded from the #MeToo movement. Wafula Strike (2018), a black disabled woman, argued that the conversation around diversity mainly refers to, “race and sexuality, while disability is left out” and that campaigning still tends to focus on securing rights for able-bodied women.

Overall, the #MeToo movement has raised consciousness of women’s sexual objectification on a global scale. But we still have a lot to learn. That is, we need to be more intersectional. We need to listen to all women which includes listening to women of colour, working class women, trans women, disabled women and the list can go on. We need to acknowledge the various forms of inequality and how they operate, intersect and reinforce each other. We must stand with each other, understand each other and speak out against all inequality in order to build a brighter and more equal society. As Kimberlé Crenshaw put it, “if we aren’t intersectional, some of us, the most vulnerable, are going to fall through the cracks”.

Ted Talk by Kimberlé Crenshaw on The Urgency of Intersectionality –https://www.youtube.com/watch?v=akOe5-UsQ2o

Flores (2018) The #MeTo Movement Hasn’t Been Inclusive of the Disabled Community – https://www.teenvogue.com/story/the-metoo-movement-hasnt-been-inclusive-of-the-disability-community

Kavanagh (2019) As A Disabled Woman, I’m Harassed On The Street Daily – Where’s My #MeToo Movement? – https://www.huffingtonpost.co.uk/entry/disabled-woman-me-too_uk_5d3eaee2e4b0db8affaadf12?guccounter=1&guce_referrer=aHR0cHM6Ly93d3cuZ29vZ2xlLmNvbS8&guce_referrer_sig=AQAAAB3wcS2iehONKt0drOs77vCia-_bwHOExrG9E5F9R9j8h3sr6UViDdEtwEe17PElk0TS99kl4UFLW11jPdRJ0Kz2GMmAf-Y-ConlACxXICMxSPqnC_bJWf9g5PoGwuAx2JgcjumsyP2TkziNixPO9eDgjratEmAXtV_qXC8sZaeF

Wafula Strike (2019) Disabled Women See #MeToo and Think: What About Us? – https://www.theguardian.com/commentisfree/2018/mar/08/disabled-people-metoo-womens-movement-inclusion-diversity

The following book will be available in the library when it reopens!