Lily spent three months volunteering with us at the start of 2019.  In this post she reflects upon that experience.

After I’d graduated from Edinburgh University, I knew that I wanted to spend some more time in Scotland, being one of those international students who fall absolutely in love with this country every year. I wanted to enjoy this second home of mine without the uni-related pressure, as I’d had a bit of a rough time with anxiety and self-doubt issues, as well as some depressed phases as an undergrad. But I also wanted to explore career options and gather some valuable work experience, in a country buzzing with innovation and exciting ideas and approaches. 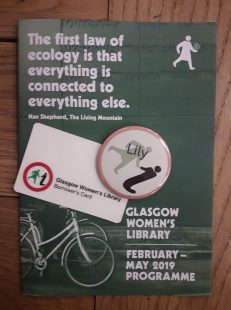 At the beginning of my final year at uni, I had been to a feminist fair on campus. A young woman was representing GWL with a stall and we got chatting. I’ve always been a big fan of public libraries – my first ever work experience was at the public library in my village in Italy, during the summer holidays. And in my first semester at uni, I’d become ‘radicalised’, I’d become a feminist. A women’s library sounded just like the dream. I couldn’t believe that I hadn’t heard about GWL earlier, really. I left the fair with a bunch of flyers, swearing to myself that I’d go and check out GWL soon, and ideally volunteer there even.

Final year at uni being final year at uni, that didn’t happen. But then, the kind-of-sabbatical I took after graduating and a couple of short, not particularly inspiring internships, seemed like the perfect time to get involved with GWL.

I guess I gave Gaby, the Volunteer Coordinator, a bit of a hard time, because I was so vague in formulating how exactly I wanted to contribute to GWL and what I hoped to gain from my time there. What I knew was that, overall, I was keen to learn how such a unique space could function as a whole. But did I want to do welcome visitors and work at the desk? Or do tours? Behind-the-scenes work like admin, or produce and edit documents? Organise and host events? Write for the blog? Do social media? Or dive into the archive and museum collections universe on the mezzanine? There was just too much cool stuff going on!

Luckily, GWL isn’t your regular anything, so of course it’s not your regular volunteering provider either. It’s a place where I felt welcomed and valued, and where I was given a chance to really get to know the place, the people who keep it running, and to explore different paths of contributing to GWL.

For the first few days, I had a read through some internal documents like strategic outlooks, development plans and the like. It was then that I fully realised just how different GWL was compared to any place I’d ever seen from an insider’s perspective. Even in annual reports it’s obvious that GWL is feminist, democratic and green to the bones. No labels, just real content. I could fully identify myself with GWL’s values, ambitions and functioning, and it felt amazing to be a part of it. Then, I helped to visualise some stats for an internal review meeting (doing stats has never been so much fun! Seriously!), and got onto preparing for ‘my’ Story Café. The Story Café is a weekly get-together of people who like to listen to stories, poetry, anything written really, read by our librarian Wendy or a guest. I chose to read extracts from the autobiography of a former Marxist feminist resistance fighter during the fascist era in Italy, Lidia Menapace, and a novel about a teenage girl experiencing her first romantic roller coaster, written by my former teacher Selma Mahlknecht. The passages I read out I’d translated from Italian and German into English myself, which was a lot of fun, and, in that extent, a first for me.

I also reached out to different women’s groups in Edinburgh, where I was living, in the hope to help to expand GWL’s impressive network of like-minded people and institutions. In the end, had the chance to meet with members of Women’s Aid, YWCA and Women Being. I began to realise that I really enjoyed outreach work, and that it was an actual thing, like part of someone’s job – noted for the future career planning and job hunt. Networking and exchanges within GWL were no less interesting or inspiring – I simply tried to chat to as many staff members and volunteers about their studies, previous jobs and experiences as possible, and took some valuable pieces of advice and inputs with me – again, noted in the career notebook (big fan of notebooks here, so yes, I do have one of those).  I also attended a couple of meetings to organise Seeing Things trips – like the Story Café, Seeing Things is an amazing series of events based on a simple idea – a bunch of women go see (cultural) things together and chat about it over a cuppa afterwards. Later, I hosted a Seeing Things ‘trip’ within the library (a house production, the reading of a drama version of Muriel Spark’s Abbess of Crewe). And on my very last day ay GWL, I hosted a trip to Talbot Rice Gallery and the Fruitmarket Gallery in Auld Reekie. Nicola also helped me to dig out some interesting archive materials written in German and Italian, but they deserve their own blog post, so that’ll follow.

Overall, it’s hard not to sound cliché here, but you have to go to and see GWL to fully understand just how amazing and unique it is. How much of a cultural, social and political force it has become, a national treasure as Nicola S. put it, whilst staying true to its grassroots origins. How welcoming and open-minded everyone at GWL is, how genuinely interested in the people and the world around them. And how much it can give you – my biggest reward is a degree of re-gained confidence in myself, my opinions and my abilities. GWL’s focus on learning as a form of empowerment, has given me the courage to consider and research postgraduate programmes. Something I had already ruled out, because I’d been so overwhelmed by the higher education system and campus life during my undergrad that, despite my good grades, I simply thought I wouldn’t be able to do a postgrad. I haven’t picked a specific programme yet, but I’m enjoying the research, which a year ago would have made me so anxious. And guess what, I’m mostly looking at interdisciplinary gender studies programmes, I wonder where that’s come from…