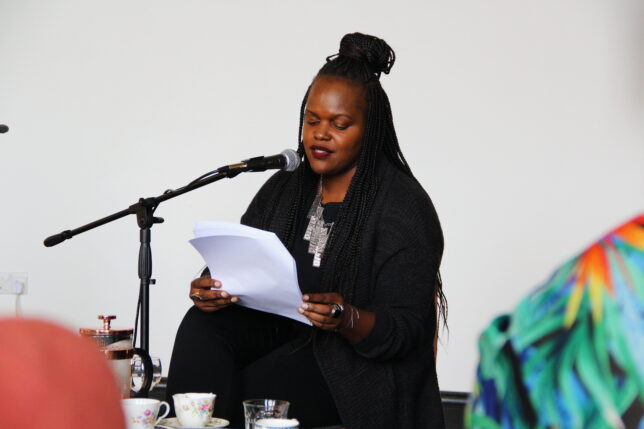 “How do we bring literature alive?” This is the question driving Wanjiru Koinange and Angela Wachuka, the co-founders of Book Bunk, an independent organisation based in Nairobi that transforms the city’s libraries into inclusive public spaces. Together with their team that has grown from being just the two of them in 2017 to a team of 16, Wanjiru and Wachuka have been working tirelessly to restore Kenya’s second oldest library, the McMillan Memorial Library, and two of its branches in Kaloleni and Makadara. Last week, we had the absolute pleasure to welcome these two trailblazing women during their second research trip to GWL.

Wanjiru’s Story Café Special on Friday was the icing on top of an eventful and inspiring week that involved various meetings at GWL, a Readers of Colour meeting in Edinburgh with Wanjiru, a tour of the National Library of Scotland, a Book Bunk showcase during GWL’s Autumn Programme launch, and a GWL Heritage Walk of the East End. Apart from making libraries more accessible, Wanjiru is the author of the forthcoming novel The Havoc of Choice. During her reading at GWL she talked about the history behind her novel, her inspirations, and her work for Book Bunk.

The Havoc of Choice tells the story of Kavata, a middle-aged woman whose husband Ngugi’s decision to run for office during the historical 2007 Kenyan election splits his entire household. Apart from exploring the implication of choice, the story confronts institutionalised amnesia and politicians’ tactics of distracting the public. In the aftermath of the 2007 elections Wanjiru realised that people experienced the post-election violence (PEV) differently depending on how affluent they were. Her novel, which was seven years in the making, aims to remind people of what happened while simultaneously asking how it is possible to move on from these events so quickly. Being able to imagine worlds that are beyond of what we see and know is one of the many gifts that reading offers us. “I don’t know if there’s a problem a book can’t fix,” states Wanjiru.

After reading some powerful and moving passages from The Havoc of Choice, Wanjiru answered our librarian Wendy’s questions about her inspirations and about how she works on opening the door for budding writers. Having read novels by writers such as Grace Ogot, Ngũgĩ wa Thiong’o and Enid Blyton at school, Wanjiru credits Chimamanda Ngozi Adichie’s originality as a major inspiration behind her writing career. Since novels like Adichie’s Purple Hibiscus transformed Wanjiru’s perception of literature, she makes sure to teach these works to her students. Democratising the syllabus and the libraries’ collections is a vital part of making them more accessible. This involves knowing which books library users actually want to see on the shelves. According to Wanjiru, “there’s a hunger for writing by Kenyan women.” 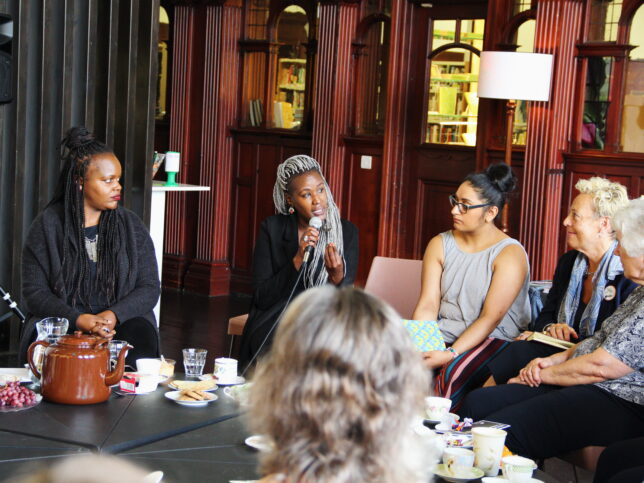 Apart from updating the libraries’ shelves, Wanjiru and her Book Bunk co-founder Wachuka, a publisher, former executive director of East Africa’s leading literary organisation Kwani Trust and this year’s Obama Foundation African Leader, creatively strategize on ways to attract more people to the library. Wachuka has recognised the power of pop culture in getting young people to read, stating “[they] want bite-size ways to consume information.” She praises the efforts of the Nairobi based storytelling production ‘Too Early for Birds’ (TEFB) in successfully bringing Kenyan history alive in ways young people can relate to. In their productions TEFB retell Kenyan history such as the history of the colonial-era McMillan library. Wanjiru mentions podcasts as another powerful way of feeding people with information that they might not be able to access otherwise. One of Wanjiru’s favourites podcasts is ‘The Spread’, a sex positive podcast by Karen Lucas which addresses issues like consent that aren’t necessarily being covered at school or at home.

Wachuka and Wanjiru also highlighted the role of social media and technology in involving young people and creating social change. While blogging was used to spread propaganda during the 2007 election, social media can also be an important tool in effecting positive change. When the New York Times made the undignified decision to publish a graphic photo of victims in the Nairobi hotel attack earlier this year, Twitter users reframed the narrative by voicing their outrage online.

Learning about the Book Bunk’s ground-breaking work and listening to Wanjiru read from her novel left everyone attending the Story Café believe in the power of imagination, words, and libraries. Like Wachuka and Wanjiru, we should all “refuse to live in a city where libraries aren’t thriving.”