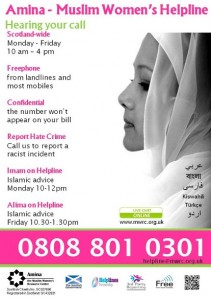 This September I have been introducing myself and making contact with support services for women in Glasgow, to research and look at who can engage in the work once that takes more shape.

On the 9th of September I met with Say Women who are  “A voluntary organisation which offers safe, supported accommodation and related services for young women, aged 16-25 years, who are survivors of childhood sexual abuse, rape or sexual assault and who are homeless or threatened with homelessness.”

I learned about the Judith Herman model of recovery http://en.wikipedia.org/wiki/Judith_Lewis_Herman which I examined further afterwards and want to learn more about and I also discovered through them that there is a Trauma Team working in Glasgow, operating within different fields of trauma including sexual assault and rape. This is an NHS service which includes an art therapist so I’m interested in that having worked previously with Marion Liebmann and seeing what a force art therapy can be.

Say Women felt like a hugely comforting environment, with considerate spaces and artwork on the walls. One in particular, the silhouette of a woman divided into two sections, top and bottom. The vacant silhouette was saturated in words, negative words above and positive words below. It was explained to me that the positive words provided the foundations and thus held up/elevated the other negative part of the same self. We chatted about that work and how to preserve it and I watched a really compelling short film young women had made about their experiences, self directed, acted and edited to highlight their vulnerability.

On the same day I met with Glasgow Women’s Aid and had a very detailed conversation around how an artist might integrate with their established practice of supporting women. We also had a really fascinating conversation about fashion, based on the fact that all of us in the meeting had a great love for individuality and self expression through garments. Someone mentioned a particular brand of green hear gel from the 80s and I had a sudden overwhelming smell/texture memory. It was a very Glaswegian dialogue encompassing Flip, the Briggait, The Warehouse and other iconic fashion hotspots that don’t exist anymore. Its interesting to discuss visual identity in the context of supporting women because often that’s an aspect of a woman’s life that becomes subject to control in an abusive relationship.

In the same week, I attended an awareness event run by Amina, to highlight violence against women from a Muslim and human rights perspective. Amina “aim to inspire Muslim women to fulfil their true potential.We empower women to participate fully in all aspects of society, without fear of discrimination or inequality.” This was a really dynamic gathering with lots of debate. There is a clear issue for religious women specifically in how to protect themselves from abuse and violence whilst remaining within the tenets of the Islamic faith. Speakers included Shaykh Abdul Aziz, an Islamic scholar and Ghazala Hakeem who had endured horrifying domestic abuse and now speaks in public to other women about her route out. What became clear was the discrepancy between being traditionally advised to turn to your faith community, via the mosque or the Imam, to seek support regarding an abusive partner… and the realities of what that could mean. One women asked, what is the relevance of the mosque to a woman who’s abusive husband isn’t religious, if he won’t listen? I learnt a new Islamic word, SABR. It translates as endurance and patience and in the past, women have been told by the Imam or their families that a wife should observe SABR and accept their lot. Shaykh Abdul Aziz promotes understanding of the word in a way that asserts steadfastness in the face of abuse in terms of resisting it and pro actively making change by challenging violence and refusing to accept it. They also discussed forced marriage and genital mutilation, Police Scotland were represented to assert that involvement in Forced Marriage is a criminal offence, Scotland could already issue Forced marriage Protection Orders and are the first in the UK to be able to prosecute if the order is breached. What is clear is that BME women are particularly vulnerable to abuse for a myriad of reasons including language issues, no knowledge of support available, precarious immigration status, social isolation and the fact that they  can be culturally subject to harmful practices like FGM and forced marriage, so this is a significant event to have attended.

I am now in the process of devising some form of visual flyer including posters which can be distributed to women through the services in order to facilitate their greater understanding of the aims of the residency.