Star by star by Sheena Wilkinson 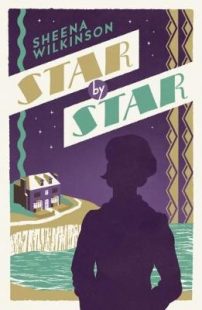 Last autumn, I recommended some Suffragette stories for younger women that had recently been added to stock. Star by star is an addition to that list – and I think it’s the best yet!

Unlike the other stories, the vote (for some women) has already been won at the beginning of the book. It’s late 1918, the Great War is rumbling to a close and a flu pandemic is sweeping the globe. Fifteen year-old Stella’s mother is one of its victims, and Stella makes her a death-bed promise that she will travel from their home in Manchester to Ireland to live with an aunt she has never met.
Nancy, her mother’s sister, runs a boarding house in a quiet coastal village near Belfast. Stella, who was sewing Votes for Women onto banners and going on Suffragette marches with her mother from a very young age, doesn’t quite see how she is going to fit in. She is a very modern young woman with strong views who wants to change the world. Nancy and her paying guests (two older women and an army captain fighting inner demons) are less keen to be changed. Stella takes her frustrations out in physical work, both in Nancy’s garden and on the farm belonging to Rose, her mother’s childhood friend.

As the war ends and the first election with the new franchise approaches, Stella is desperate to make sure her friends all vote, though she discovers that she has a lot to learn about Irish politics and the tensions between Unionists and Republicans. This helps her to realise that changing the world is a big thing and can’t be done all at once.
I really enjoyed this book. Stella is a hugely engaging character, even though her conviction that she knows what is best for everyone leads her into some terrible scrapes and embarrassing situations. But she is only 15 and she is learning: the book’s conclusion is hopeful in that we are sure she will make a difference to the world someday, as well as finding personal happiness with a family she didn’t know she had. As the night sky is brightened star by star, change must come person by person, girl by girl, vote by vote.