Having read and enjoyed her first book “Being Emily” and then subsequently reviewing it for Glasgow Women’s Library, the author Rachel Gold read my review and was kind enough to send me 2 signed copies of her latest novel “Just Girls.” (I will be giving one copy to GWL and still have one spare if anyone would like to read and review it.) 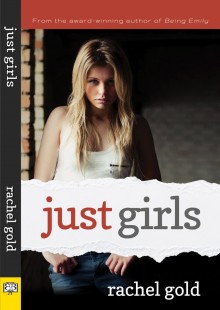 This book links nicely with and follows on from its predecessor. It tells the story of two young women as they navigate college and the wider world. Ella Ramsey is a friend of the protagonist of “Being Emily” – Emily of course – and her partner Claire, who make welcome guest appearances. She comes from a very different background from that of Emily – her family have long been very supportive of her transition and she arrives at Freytag University well on her way as teenage girls are to becoming a fully-fledged young woman, ready to begin her studies and the next stage of her life. However, not only does the college deal cackhandedly and insensitively with having their first trans* student by not allowing her to share a room with another female student and instead giving her separate rooms but some indiscreet and possibly malevolent person in the admissions has let it slip that there is a trans* student attending the college, much to the outrage of certain students and staff.

Enter Jess Tucker, a gay cis student at the college who upon hearing of this vicious and unnecessary outing, takes on board the mantra of “an injury to one is an injury to all” and publicly declares herself to be the as yet unnamed trans* person. Slurs are painted on her dorm door and she is attacked verbally and physically. She meets Ella through the uni’s LGBTi group and, although Ella does not initially reveal herself to be the woman Jess has stood in defence of, they become firm friends and end up sharing rooms.

For me, this book is not so much about Ella (if it had been it could easily have become a re-tread of Emily’s story, as good as that was) but more about Jess and her journey. She clashes with her lover, the faculty and her own way of thinking as she explores friendships and relationships beyond her prior sphere of experience.

Mention must be made of Ella’s friend from home, Nico, who is genderqueer.  Yo is a nicely rounded character who adds to the richness of this story of young people today.

As I said for “Being Emily”, this is an excellent book for any young person to read as it is a story about people like them and unlike them, which is always the basis for a good tale. What comes across strongly is that, to use my favourite quote from that great woman philosopher Marge Simpson, “our difference are only skin deep but our sames go down to the bone.” This is also another fine read for any age – we were all young once and as I always maintain, still changing, still evolving.

At a time with a myriad of discussions around what “makes” a woman (or a man for that matter) and where others seek to draw lines in the sand I’d like to add my own tuppence worth – in a society where women make up 51% of the population yet are systematically ridiculed, shouted down, belittled, trolled, threatened, abused, raped and murdered, anyone and I mean anyone who willingly joins with us, stands shoulder to shoulder and declares herself WOMAN is my sister. I will don my armour with her, fight alongside her and defend her as she defends me, back to back and shoulder to shoulder. If you call yourself woman, as I do, that’s good enough for me.

*Lyric from “Transgender Dysphoria Blues” by Laura Jane Grace and Against Me!