Glasgow Women’s Library has created the Ripples on the Pond Film Group. Under the direction of Glasgow based artist Helen de Main, we are currently making a selection of short documentaries on artists who are exhibiting at the Gallery of Modern Art (GOMA) in the Ripples on the Pond exhibition. Many of these artists also featured in the 21 Revolutions art book produced by GWL.

Our group consists of a diverse selection of volunteers: some are GWL veterans who have been involved in lots of projects, some are from the Young Critics scheme, and some are first time volunteers are the library.

So far, we are still in the production stage. The past few weeks have taken us out and about in Glasgow as part of our research. We visited GOMA to have a guided tour from Katie Bruce, the curator of the exhibition, which provided some excellent insight into the art works. We also got a tour of Glasgow print studio where we saw many artists at work producing prints, and there we bumped into Ciera Phillips, also a 21 Revolutions artist, who gave us an informal chat about her processes. We were also lucky enough to have an archivist show us some original artworks that the library have in their collection, and Helen de Main complemented this by showing us some clips of interviews with some of the artists. I’ve been busy collating all of our research in a separate film-group blog that we can refer to. 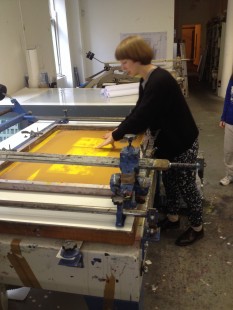 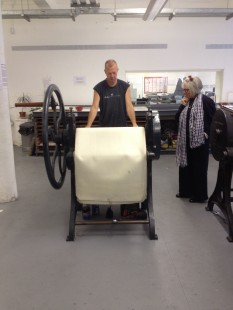 Helena Öhman, who recently made the Sex in the Women’s Library short film, provided us with camera and sound training on GWL’s in-house filming equipment. Lou Mcloughlin, an independent filmmaker, and also a GWL volunteer, hosted an interview techniques session where we got to look at a variety of interview techniques.  In the next week or so we will be getting some training on the editing software Final Cut Pro.

It’s pretty staggering how much learning we’ve managed to cram into our weekly meetings and the opportunities we’ve had in meeting lots of people from Glasgow’s art world has been very exciting. It’s also nice to see friendships forming in the group as we share our skills and knowledge. I think it’s great that this environment allows us to share our differing levels of experience so freely with each other. 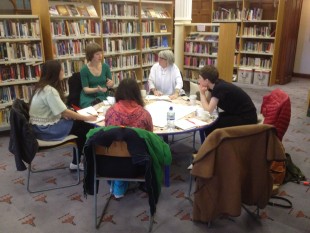 Our first filming session is this coming Wednesday and I think we’re all fairly excited about getting some footage although this is when the work really begins. Once we’ve filmed our interviews we will set about editing them: always the most time consuming element of filming. Our goal is to have the films finished by the end of the year so that they can be shown alongside the original artworks in GOMA. I think I speak for everyone when I say how privileged we feel to help document the work being done by prominent women artists working in Scotland today and I look forward to writing another update as our project crosses the finishing line!

Ripples on the Pond Artist Interviews

Ripples on the Pond Artist Interviews