Today, Glasgow Women’s Library celebrates the launch of its newly refurbished building, with a visit from First Minister Nicola Sturgeon. The stunning new purpose-designed spaces will be home to unique and fascinating archives and artefacts celebrating women’s writing, history and achievements in Scotland and beyond. 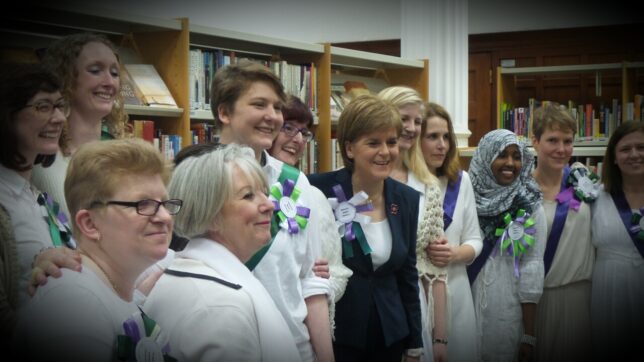 In reaching this landmark achievement, Glasgow Women’s Library has benefitted from capital grants and public donations of over £1 million to revamp the Grade B-listed Carnegie public library building with purpose-built spaces for its innovative programmes of cultural and learning events.

As the only accredited museum in the UK dedicated to women’s history, Glasgow Women’s Library now also boasts purpose-built stores in which to preserve its rare collections of artefacts and archives, including a substantial collection of original Suffragette memorabilia. Equipped with exhibition spaces and provision for a forthcoming cafe and shop, the building will also be available for community use with a dazzling events programme celebrating Scotland’s women’s culture, achievements, learning and heritage.

The outside façade of a newly installed lift features titles from the Library’s vast book collection. Visited by people from all over the world, while also being well used by the local East End community, Glasgow Women’s Library is open for events and visits, respected all over Scotland as both a cultural asset to Glasgow’s East End and an important centre for women’s history, empowerment and learning in Scotland. 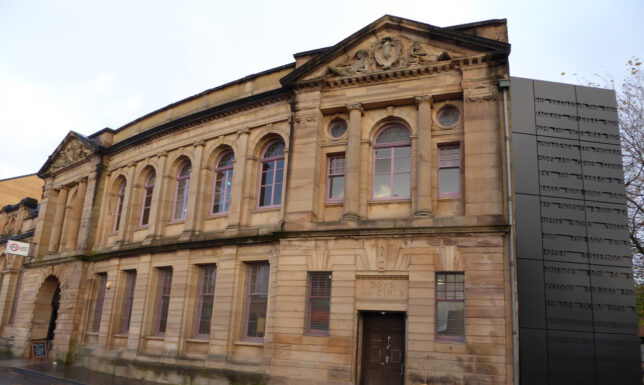 Funding for the major redevelopment was provided by the Heritage Lottery Fund, the Scottish Government, Scottish Futures Trust, Glasgow City Council, Creative Scotland, Clyde Gateway and Museums Galleries Scotland. A portion of the funds raised came from ‘Women on the Shelf’, a individual donations initiative to allow anyone to honour a woman special to them by dedicating a shelf or Library section in their name, with all funds going towards the capital build project.

Formerly the Bridgeton Public Library, the building has been given a new lease of life as a part of the 2014 Commonwealth Games regeneration, with Clyde Gateway supporting Glasgow Women’s Library in managing the capital build project.

Since its founding in 1991, Glasgow Women’s Library has been based in a number of locations including Garnethill, Trongate and, for several years prior to this move, in temporary premises including the Mitchell Library. Now granted a long-term lease by Glasgow City Council, Glasgow Women’s Library appointed Collective Architecture to design the refurbishment of the building.

“Glasgow Women’s Library is truly a national treasure and I am thrilled to officially open the new premises after the recent renovation.

“As well as excellent resources, the library also offers vital support to women – and makes a real difference to so many people’s lives.

“The Scottish Government was happy to support the library by contributing over £500,000 to the renovation so their work could continue.”

It's wonderful to be joined by so many inspiring women on our launch day. #gwllaunch pic.twitter.com/Gozqf9w4z4

“We are incredibly proud of reaching this milestone in our journey – to becoming a national centre for women’s history and achievement based in the historic and regenerating East End of Glasgow. Collective Architecture designed this beautiful space within an historic library building – and the response to our new home has been tremendous. It’s a dream come true to have purpose-built premises to house our unique and rare collections and to witness local, national and international visitors appreciating and using them. The launch of this building marks our transition to a permanent, forever home and we are so appreciative of the crucial support that our funders, partners, donors and friends have contributed in getting us here.”

“Saving significant artefacts and archives has never been more important. They provide an invaluable record of our society and how it has changed over the years. They also provide a catalyst, in this case for women of many backgrounds and experiences, to come together to discuss the issues that face them and explore those that face others. I have watched the important work that Glasgow Women’s Library has done over many years and am delighted that Heritage Lottery Fund, as a result of National Lottery Players, has been able to support their move to a vibrant new home where people can delve into the voices, memories and stories that make up our country’s fascinating social history. We congratulate everyone, including the extensive band of committed volunteers, who have made this happen.”

“It is wonderful that, after almost 25 years, Glasgow Women’s Library has found itself a permanent location and that it is here in Bridgeton Cross at the very heart of the Clyde Gateway area. In doing so, the Library has become the latest in what is an ever increasing number of important organisations who have decided that this is the place to call home. The staff and volunteers have already had a very significant and positive impact on the local community and I have no doubt that this will increase yet further thanks to what is going to be on offer from this marvellously restored building.”