2018 marked the centenary of The Representation of the People Act 1918, which introduced the franchise to women over the age of 30 who met a minimum property qualification. While not constituting the franchise on an equal basis with men, the Act of 1918 is widely accepted as having been a significant precursor to the eventual Representation of the People (Equal Franchise) Act of 1928.

The GWL collections feature a wide variety of books and objects relating to the Suffrage movement but our range of postcards is arguably the most visually arresting. Both for and against women’s suffrage, they have pictures and slogans that are often shocking and grotesque.

Postcard: “We want our vote!” 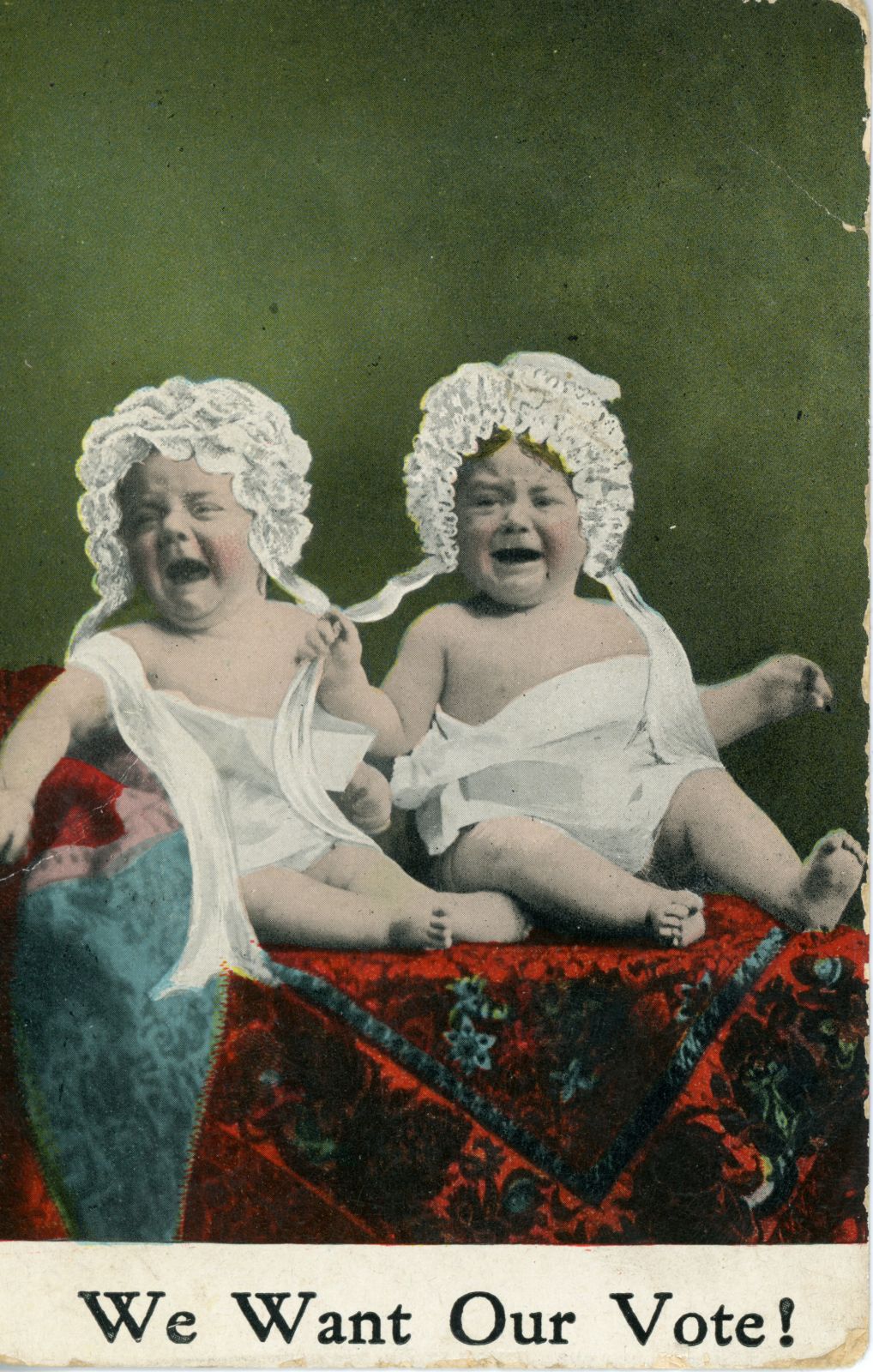 Babies and children appear often on the anti-suffrage postcards and are used to infantilise Suffragettes... 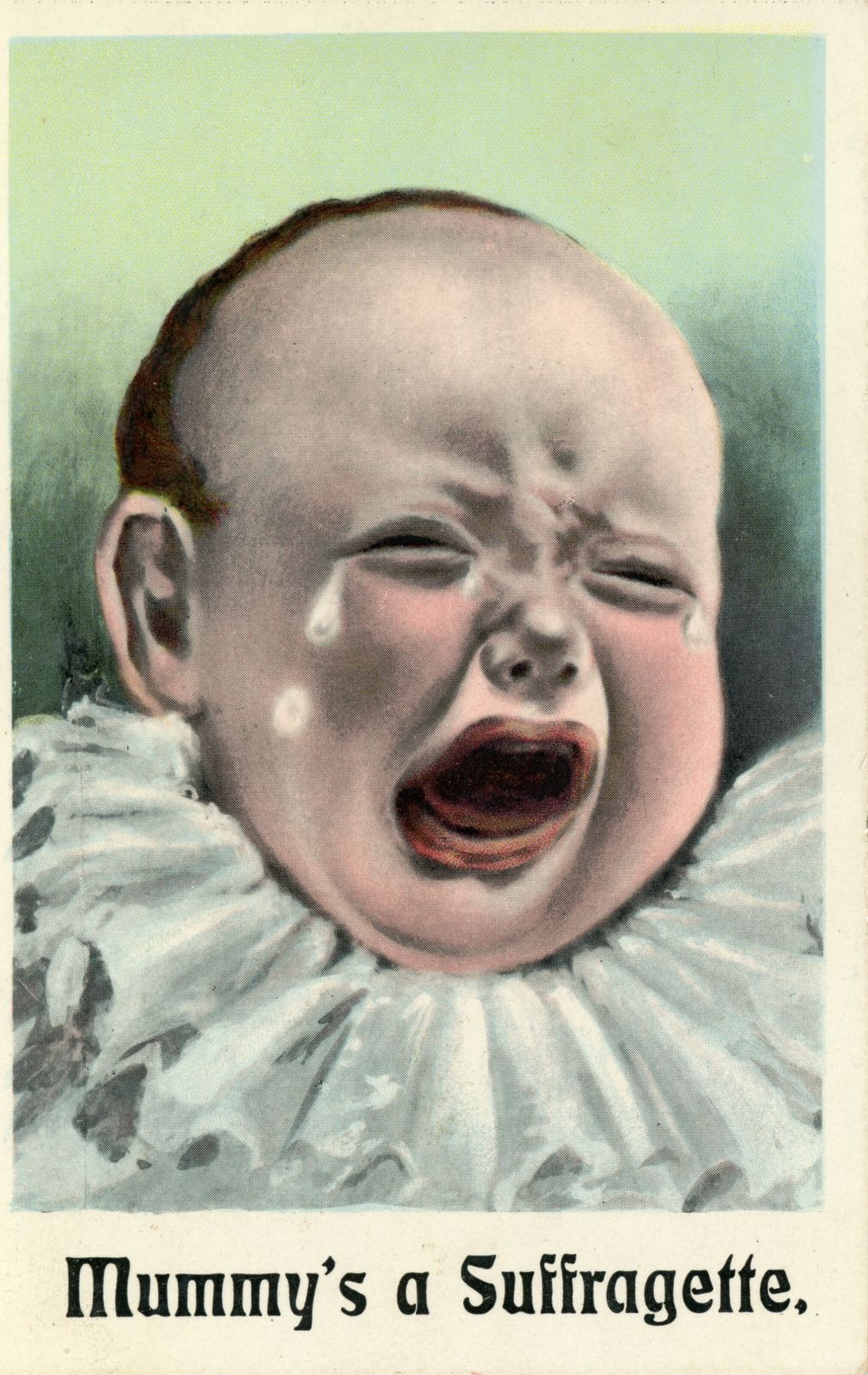 ...as well as to remind the public of women’s traditional role of mother and caregiver. Children and husbands suffering because of a Suffragette in their family is a common theme in anti-suffrage postcards

Postcard: “There’s no end to a Woman’s Tongue” 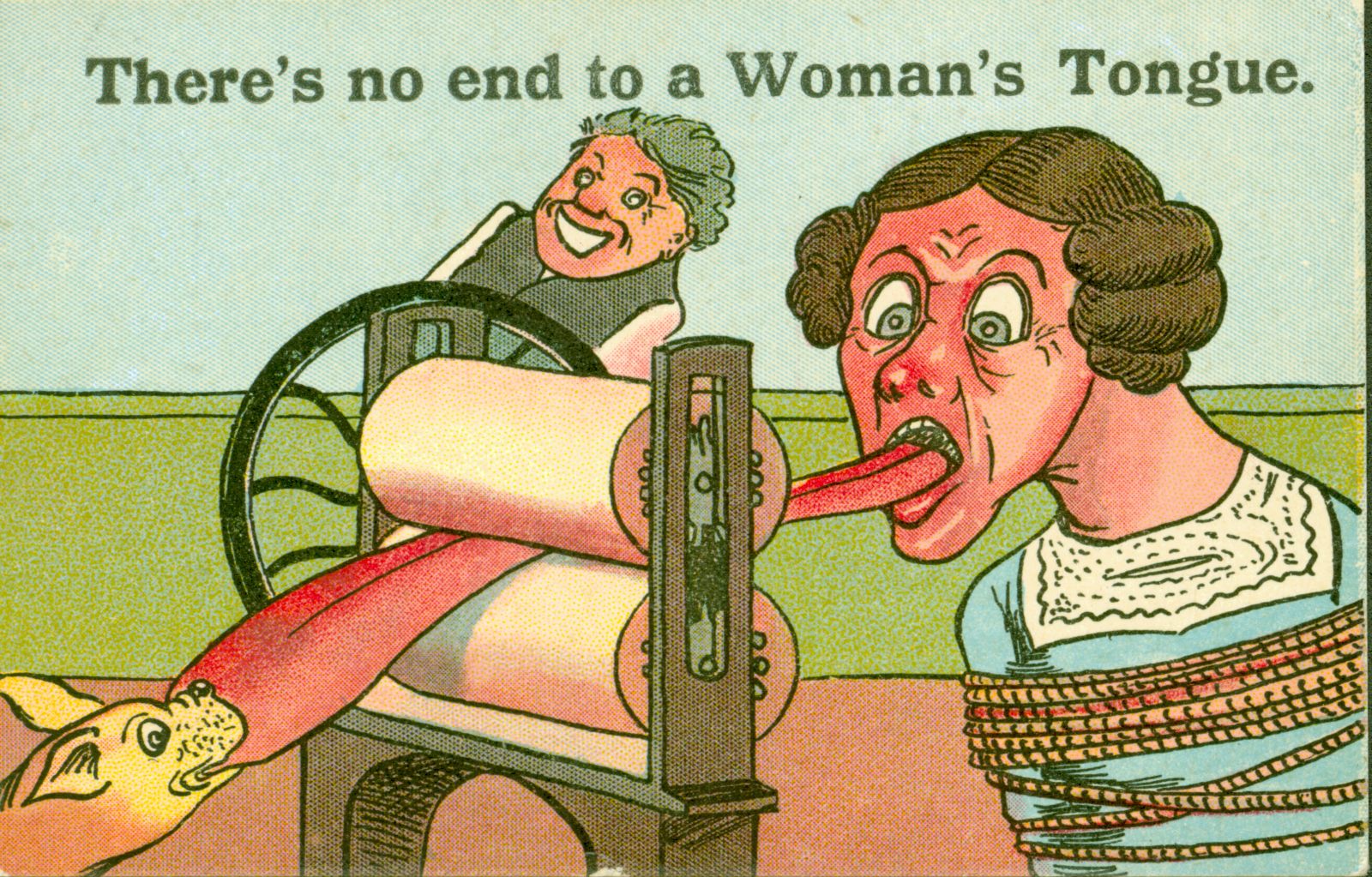 Physically holding or harming a woman’s tongue or forcibly keeping her mouth shut is another common theme in the anti-suffrage postcards.

Some aren’t obviously related to the Suffrage movement but appeal more to the desire to keep women in their place and keep them quiet. 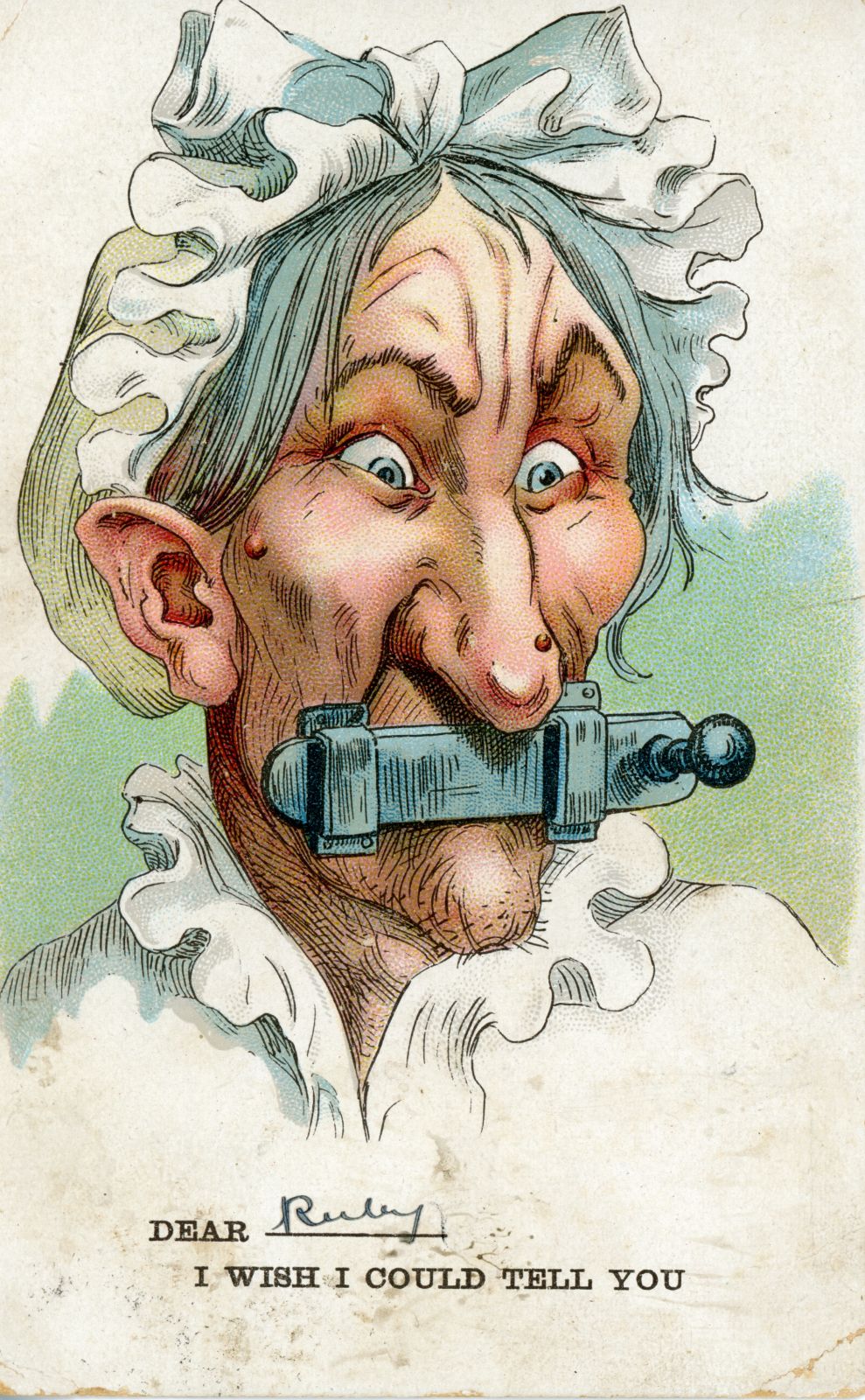 These very visceral depictions of silencing women are sometimes at odds with their cheery messages of greeting, as can be seen on the reverse of this ‘Dear Ruby’ postcard.

The text on the reverse of this postcard reads: '[Dear Ruby, I wish I could tell you] That I should be glad to see you home to our entertainment on March 7th as I am in it. May’

In the early 20th century, postcards were a quick, cheap and easily accessible form of communication. At the time many of these postcards were delivered, there might be up to four deliveries of mail a day in the countryside and as many as eight in the cities, so postcards and letters were a much used means of communication and faster than we might think of today. 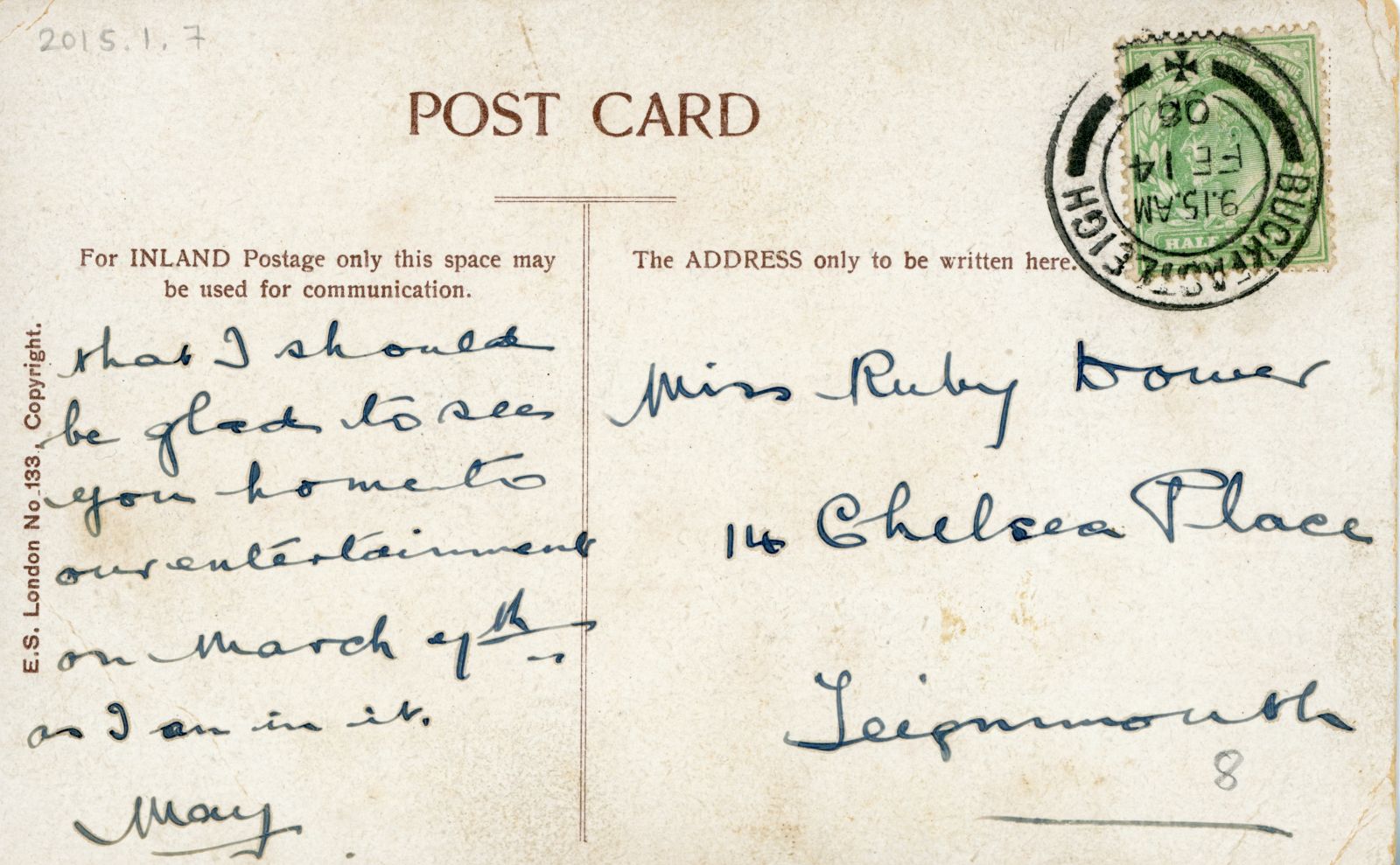 Postcard: “Then they will be satisfied” 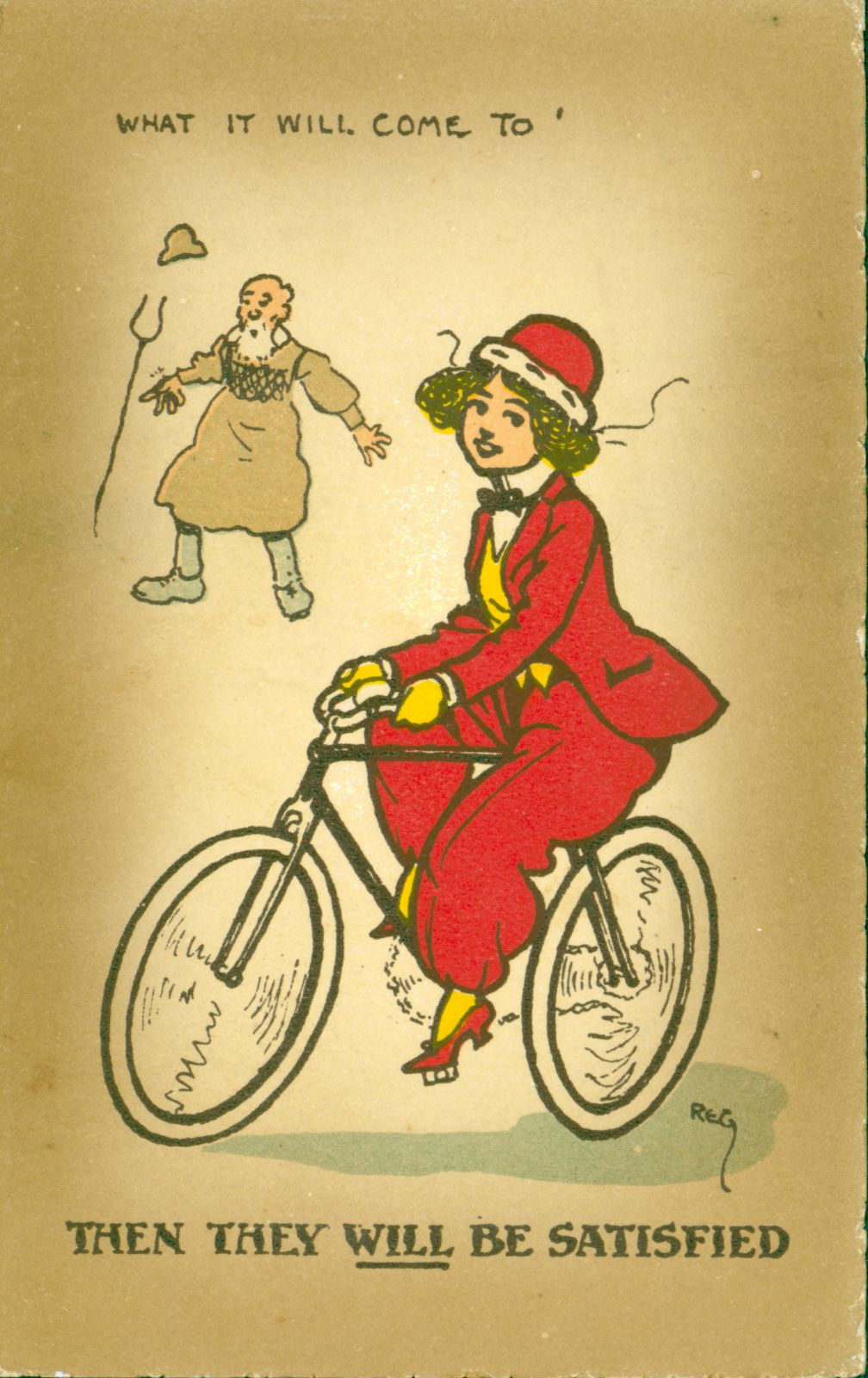 Sometimes the use of the postcards actually subverts the message intended from its imagery.

For instance, this postcard portrays a woman on a bicycle with an anti-suffrage tone but the message on the back tells a different story, recounting one woman’s experience of learning to ride a bike and how useful and enjoyable she found it. The text on this postcard reads: ‘I saw one similar to the card few days ago, very comfy I should say, especially in windy weather. I learnt the bike last week & find riding useful & enjoyable.’ 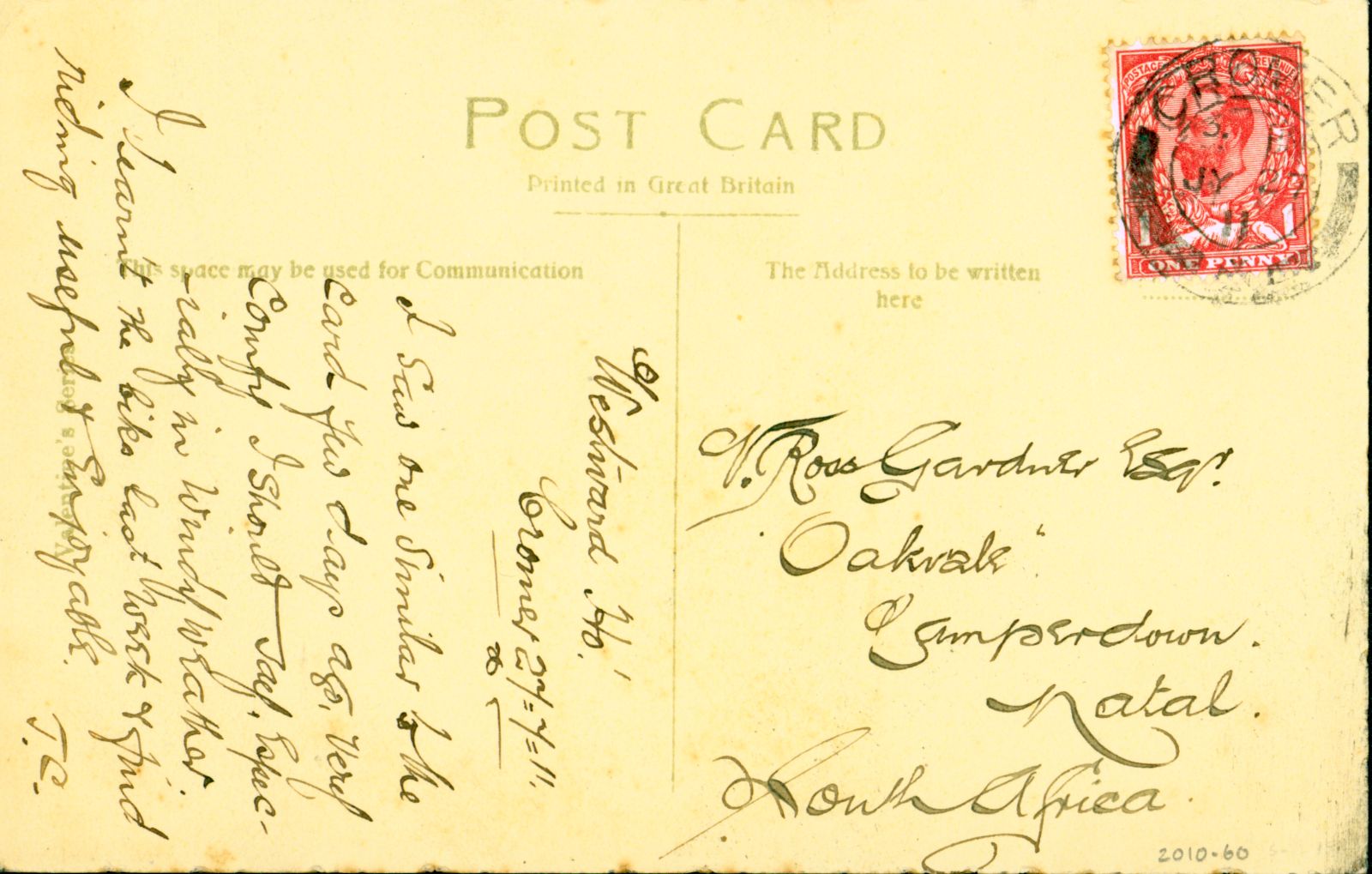 Postcard: “This is ‘THE HOUSE’ that man built…” (Pro-Suffrage) 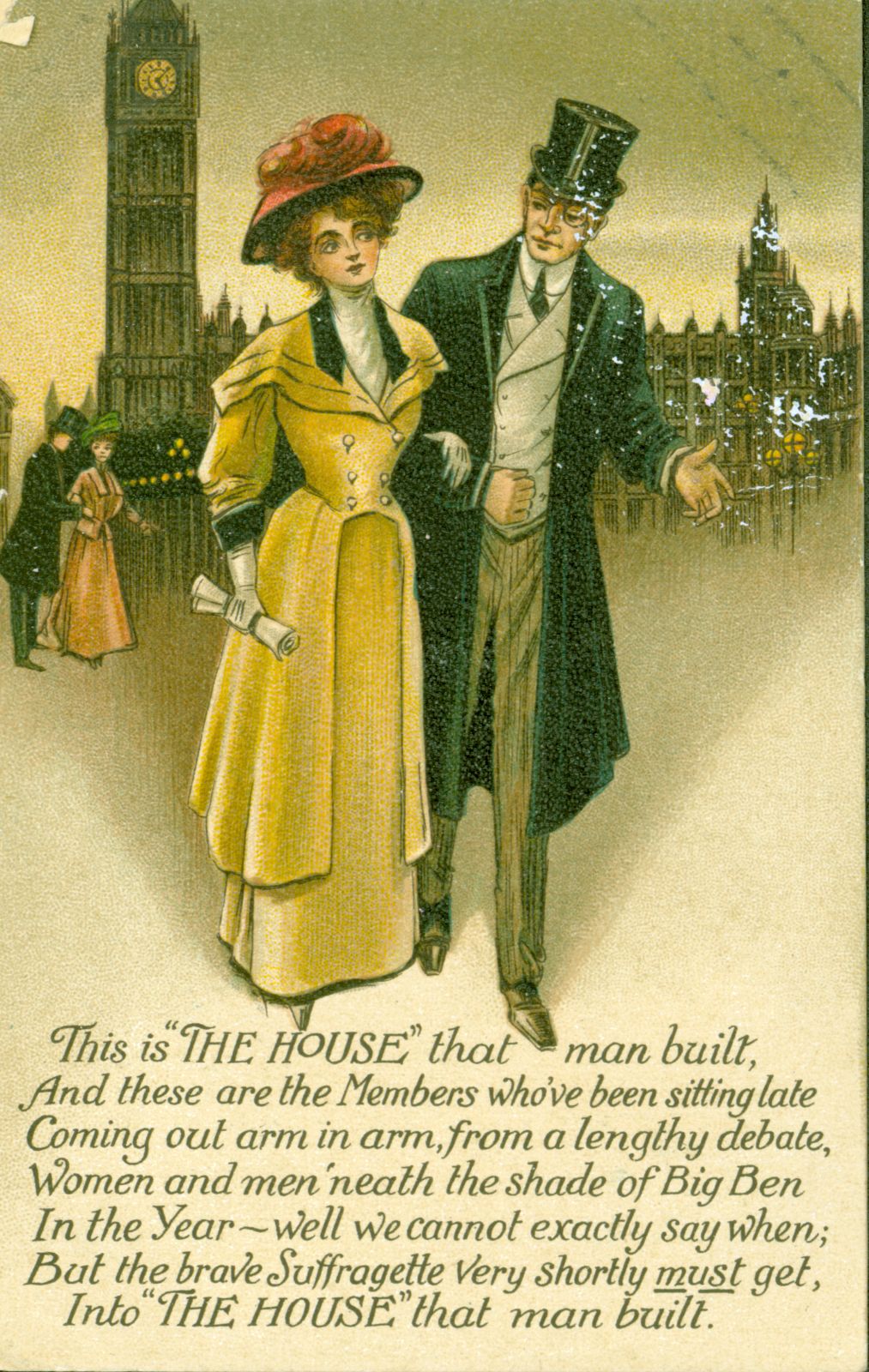 Many of the pro-suffrage postcards issued by the Women’s Social and Political Union (WSPU) and the Women’s Freedom League (WFL) were photos of some of the inspirational women in the movement but some also had similar imagery and themes as their anti-suffrage counterparts.

This postcard is a response to an anti-suffrage postcard series that was based on the rhyme, 'This is the house that Jack built', with an opposing message to the mocking tones of the anti-suffrage postcard, this poem outlines the desire for an equal opportunity to participate in politics and shows a man and a woman arm in arm. It ends with the lines, ‘In the Year – well we cannot exactly say when; But the brave Suffragette very shortly must get, Into “The House” that man built.’

Postcard: “This is ‘The House’ that man built…” (Anti-Suffrage) 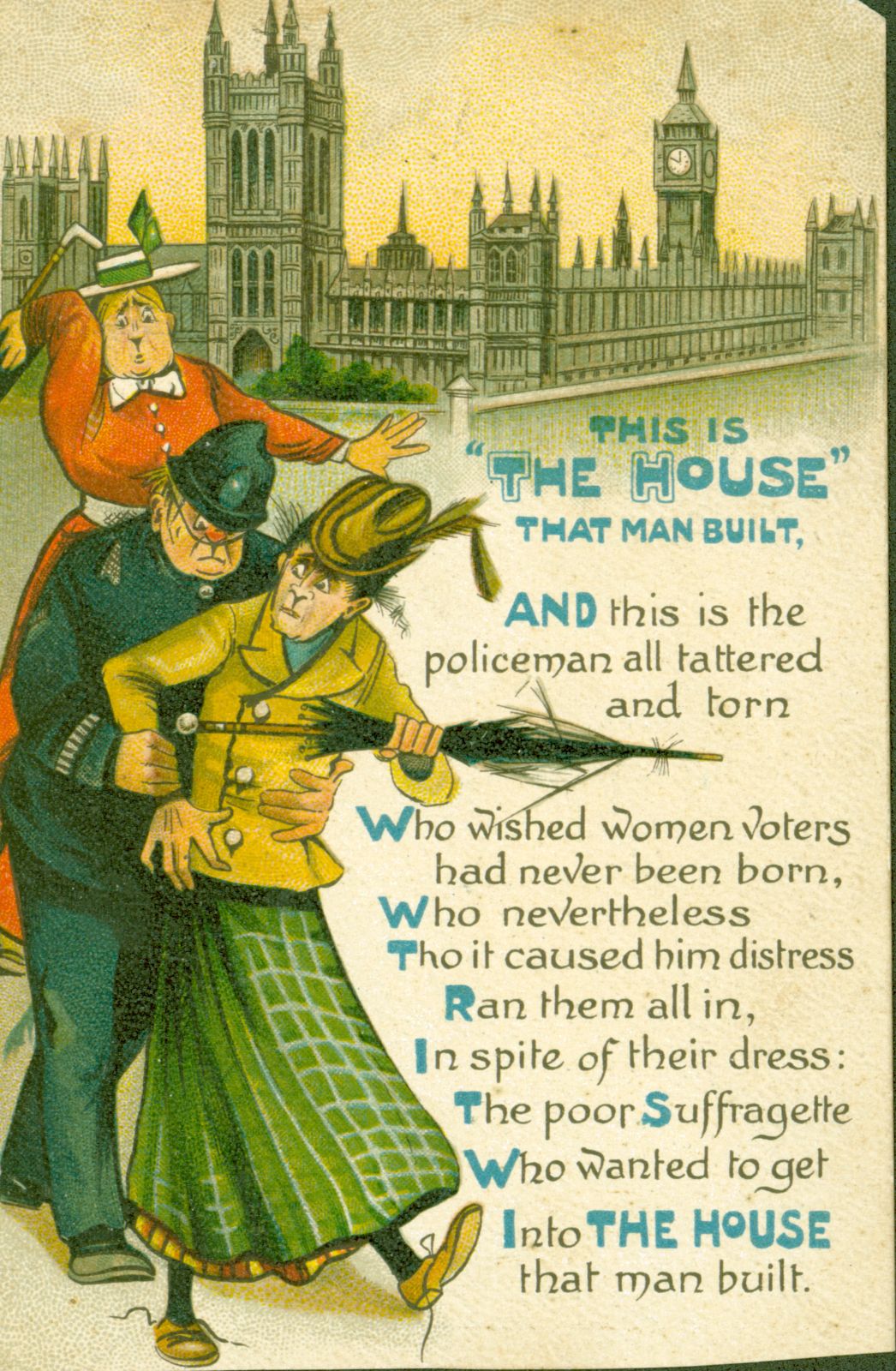 But would it surprise you to know that the same publishers produced both postcards?

'BB London’: Birn Brothers produced both sets of postcards, catering to both pro and anti-suffrage supporters.

Postcard: “I want my Vote!” 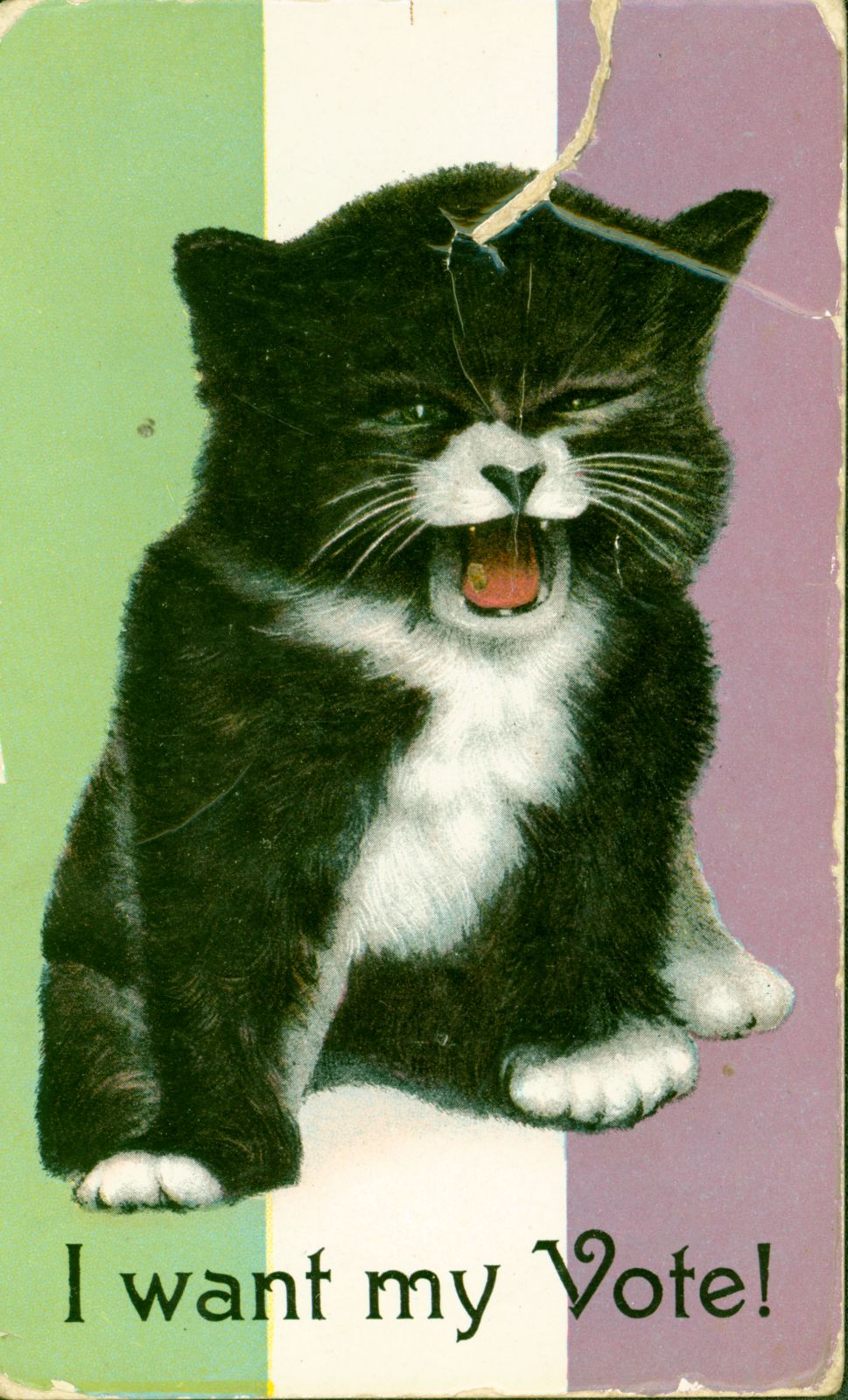 These postcards illustrate just how hard both sides fought for and against women’s suffrage and the postcards shown here reflect only a small proportion of the Glasgow Women’s Library collection. Although the fearmongering from the anti-suffrage campaigners ultimately lost out, it’s important to look back at these artefacts and observe how society has attempted to subdue and silence women.

The entire collection of pro- and anti-suffrage postcards can be browsed on our museum collection catalogue.

This online exhibition is also available to view on Google Arts and Culture.