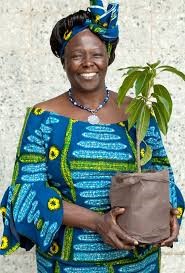 WANGARI MUTA was born in 1940 in Kenya’s Central Highlands, an area renowned for its natural beauty and abundance.  Unusually for girls at that time, she went to school at the age of eight and, after excelling in her studies, won a scholarship to study in America where she achieved at Master’s degree in science. In 1969 Wangari married Mwangi Mathai and they had three children together. Mwangi had political aspirations, but these did not slow his wife’s own ambitions. Wangari completed a PhD from Nairobi University in 1971 –becoming the first women to gain a doctorate in East and Central Africa. 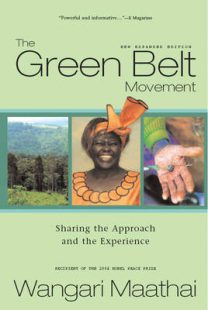 She taught veterinary anatomy at the university and went on to chair the department, another first for women in Kenya.

During this time Wangari’s husband left her, accusing her of adultery. She suffered at the hands of the divorce court, which found in her husband’s favour, and Wangari spent three days in jail after calling the judge “incompetent and corrupt”. In a country where women are expected to be quiet and obedient, she suffered personally and financially from the split and, at one stage, found herself unemployed and homeless. After the divorce she changed her surname to Maathai – with two As – altering her husband’s name into one of her own making.

In the mid-70s, Wangari became involved with the National Council of Women in Kenya and began a community planting initiative. This grew to become the Green Belt Movement which encouraged women to plant trees in an effort to slow the deforestation and desertification of the Kenyan countryside. The GBM movement has since planted around 50 million trees.

The GBM also involved itself in the protection of Kenya’s green spaces, protesting against proposals to build in the country’s parks and forests. Wangari was perceived as a danger by President Daniel arap Moi who called her “a mad woman” and “a threat to the order and security of the country”. She and her colleagues were regularly targeted and beaten by armed guards for attempting to stop land-grabs and halt the clearing of Kenya’s green public spaces.

“Both ethnic and gender barriers now were placed in the way of my self-advancement. I realized then that the sky would not be my limit! Most likely, my gender and my ethnicity would be.”

In 2002, Wangari stood in Kenya’s first democratic election since 1964 and became a parliamentary member with 98% of the vote. In 2004 she was awarded the Nobel Peace Prize “for her contribution to sustainable development, democracy and peace”. She was the first African woman to be given this honour.

Wangari continued to strive for a better, fairer Africa, often speaking out on subjects such as democracy, climate change, AIDS and women’s rights. She died of cancer in 2011 but the Green Belt Movement continues to work towards safe-guarding and improving Africa’s environment.

Click here for more information on The Green Belt Movement