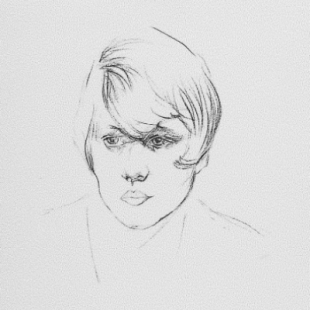 Olive Fraser was a poet from Nairn – ‘A headlong kind of a girl, a force of energy and adventure’ (Ali Smith) – whose burgeoning creative talent flourished during her attendance at the Universities of Aberdeen and Cambridge, where she won many prizes, including becoming the first female student to win the Chancellor’s medal for poetry in 1935 (they had to design a special outfit especially for the occasion). She was a quirky character who became known for her flamboyant outfits and social transgressions, yet who remained strongly attached to the landscapes in which she grew up. Much of Olive’s poetry explores her appreciation of the Scottish Highlands, as well as dealing with other themes including mental health and friendship. Unfortunately, she fell ill and was impoverished for much of her adulthood, moving from place to place in England, and only enjoying a few years of good health back in Aberdeen at the end of her life.

Professor Helena Shire, Olive’s friend and fellow student, worked hard to publish Olive’s poetry posthumously: The Pure Account (1981) and The Wrong Music (1989). In 2013 meanwhile, contemporary Scottish writer Ali Smith, who also studied at Aberdeen and Cambridge, published a book called Shire, which includes a heart-felt re-imagining of Olive’s life. In this book Ali Smith draws connections between Olive’s experiences and her own, positioning herself alongside Helena and Olive as part of an ongoing tradition of Highland women writers. This book emphasises the importance of celebrating other women writers, especially those who have not been fully recognised for their talent. Without Helena Shire and later Ali Smith’s efforts, Olive’s work would have been almost completely lost.

Extracts of Poems by Olive Fraser

Long do the stone and echoing tree
Speak in the world after the voice is dead.
Tho’ silently
The winter thrush, singing aloof
By the hoar drop, at last is fled
She leaves her music in the forest roof.

What if I see in thee more than thou art,
I see within myself what I may be,
A road as yet untrod, a mystery
Because thy mystery invades my heart

And steals upon it with the forms of towers
And streets and castellated houses graced
With lovers’ candles in their windows placed,
And all these sins do draw my earthly hours

In thee the secret orchards blow
And put their ultimate apples forth
To nurture me amid the snow
And in the gorgeous north.

This is an excerpt from ‘Four Readings’, an upcoming film that explores the work of the poet Olive Fraser, created by GWL Volunteer Katherine Midgley. We’re delighted to present an excerpt from the film here and look forward to sharing the final piece later in the year. Below Katherine talks about the process of making the film.

As Fraser made a few very strong friendships during her life, diligently keeping in touch with people by letter even when she moved away, I felt a human response to her work was the most appropriate. In ‘Four Readings’, I asked two women from my Buddhist meditation group and two women from my football team to read the poem ‘This is My Land’. I chose the poem because the title conveyed a sense of agency to the individual readers. I then recorded the two pairs as they reflected on what they had read, and what responses the poem had elicited.

It was important to me that none of the women had read Fraser’s poetry before or knew anything about her life, and I recorded their readings without them having even scanned through the poem. Several of the women also had little or no interest in poetry before taking part in the project. All this meant that they could bring honesty and emotional judgments to the discussions, rather than relying on received ideas or academic themes. I set the recordings to diverse footage filmed in Scotland and London, and music made using flute, mandolin and loop pedal. My aim here was to subtly bring out the individual flavours and dignity of the readings, without this becoming whimsical. The full film will be available to watch at the end of June.

For more of my work, please visit www.katherinemidgley.com

What others had to say about Olive…

‘Friendship with Olive meant living a life keyed half-a-tone above normal. Emergencies sprouted in her path’

‘Olive Fraser’s poems of Scotland show ‘the dear land’ in universal terms, where man, bird, beast, fish, place and stone of the mountains are in place in the order of nature, and the intricately ordered poem celebrates that harmony . . . I know of no other poet in modern times who can so rouse the reverberations of meaning within a word’

‘she grew up with a deep schism in her personality – love and hate, a discord of life matched only by the concord of her poetry’

– Helena Shire in The Wrong Music

‘She was a strong lass and she had a good throw on her, as good a throw as a boy any day, easily as good as thon holiday boy she’d shoved in the river…who said pater and mater to rhyme with alligator‘

‘She sat low on the old nursing chair and the Fraser books sat on the shelf right next to her eye. Fraser. Olive. O LIVE. I LOVE. O VILE. EVIL O. She reached and took out the first book. She didn’t even look at it, she threw the book. She just threw it. And that’s how, when the spine fell off it and she picked it up to look at the bad damage she’d done, she saw – the music, there. Inside, behind the spine, the place where the pages were bound was lined with it, notes and staves all the way down the place the name of the book had been covering . . . The clean closed spines of all the Scotts, books after book quiet and waiting, lined three shelves. She shouldn’t even be in the front room. It was kept for the good. It wasn’t used. She went to the space on the shelf that Ivanhoe had left. She put her finger to the top of the spine of the book next to the space. She tipped the book out, watched it balance on its own weight then fall. She caught it in her hand. Waverley Novels. The Heart of Mid-Lothian. She ran her hand over the good spine. The paper of it felt like brushed leather. It looked expensive. It looked like it would never break . . . She gave it a tug with her fingers. She went to the kitchen to get the gutting knife’

‘A talker. A livewire. She was a beauty, but she gave the men a run for it. Hilariously funny. A poet. Circle of admiring undergraduates at her feet and her lines spilling out of her all Spenserian stanza. Annoying to young men in seminars: she niver thocht that up herself, far did she get it fae? Beloved of landladies (and simultaneously disapproved of): that Miss Fraser! She keepit awfa ‘ours. Bright, glowing like a lightbulb, ideas flickering like power surges. When trying to string fishing line on a rod and reel in her student lodgings, tangles herself up so badly that she has to toss a coin out of a window to a passing boy to get him to send a telegram to her friend Helena . . . imprisoned in digs. Please rescue. Olive’