My mum went to Glasgow’s ‘Dough School’ (College of Domestic Science) and was a fantastic cook and baker. Nothing was ‘shop bought’. Actually, a box of mixed fancies from the City Bakeries was a bit of a treat. But I always thought it was odd that, while we (my dad and brothers) sat down to platefuls of homemade, delicious and nourishing food, she would have two Ryvita and half a tomato on her plate.

If there was a new way to lose weight, my mum would be trying it out. She was always on a diet. Half a grapefruit before a meal; PLJ, the wonder drink (a lemon juice still sold as ‘part of a calorie-controlled diet’); Nimble bread; and Slimcea reduced-calorie foods. Or maybe just nothing. That’s when she didn’t sit at the table at all. She could tell you how many calories were in everything. I came home from school unexpectedly early one day and found her enveloped in a pneumatic suit which she’d bought because, by sweating out fluid, you could lose a few pounds. She went to slimming clubs. Actually, until very recently, she still did. And would continue were she more mobile. She’s now 89 and still concerned about her weight. Yesterday she wouldn’t have a strawberry tart because, as she put it, ‘I’m not allowed’. She takes great pleasure in feeding visitors with four varieties of chocolate biscuits. And takes it as a personal insult if anyone refuses (although she doesn’t eat any herself). I learned a very long time ago that it was best (for me) just to refuse, otherwise I would be overwhelmed. It was all too much.

I remember being mortified when my dad patted my bum and commented on the fact that I was putting on weight. I was about 14, a developing adolescent, and probably about six stone. So, I thought that being on a diet was just something that you began to do about the same time as you started using makeup or moved from short socks to tights. Perfectly normal. And I suppose it was, and still is, seen as perfectly normal.

Speaking to a friend, she says that her mum was exactly the same: always on a diet. She came back from school one day to find her mum running up and down the stairs because she’d heard that it burned calories. My friend started her first diet at age nine because she interpreted growing and putting on weight as ‘getting fat’. A dinner lady at school put a stop to it.

Is it coincidence that now, in our 60s, we are both careful about what we eat, exercise religiously, are slim and fit, but both have osteoporosis? Research tells us that peak bone mass in adulthood is affected by what we eat between the ages of ten and 18; and for girls, protects against postmenopausal osteoporosis.

Recently, I came across a booklet when clearing out. Nestled in a diary from 1971, What a weight to go: your Jackie guide to slimming – and putting it on, describes its mission as being ‘to help anyone with figure faults’. As it counsels, ‘Dieting is more a way of life than a couple of weeks (sic) starvation’. If you do what it says, you too can get carried around by a man with a moustache (as implied by the cover pic).

I think in being a lot around my mum recently I’ve been newly exposed to her obsession with food, and her lifelong anxieties about being fat. I’d forgotten about the other influences around as a teenager which normalised dieting and concerns with weight.

The Jackie guide wants to help you with your figure faults: too skinny or too fat. If you’ve got ‘the perfect figure’ it tells you to ‘stop reading now’ but I think we can assume that everyone buying the Jackie would think that they had a figure fault as none of us looked like the pictures in the guide. (And, none of us would have eaten a banana in quite the same way as the model in the guide is doing. It would have gone entirely over my head at the time, but someone (male photographer anyone?) obviously thought they were having a laugh.)

Sponsored by Slimcea, readers are exhorted to eat Limmits, Trimmits and Bisks because baked beans and spaghetti are FATTENING (their emphasis). If you go for Bisks, you get ‘the chance to join their Slimmers’ Club absolutely free’. And of course, you can also buy electrical massagers to help break down fatty tissue – the Pifco vibratory massager is all yours for £5.19. Until then I probably didn’t realise that there were ‘danger areas’ on my body: including legs and thighs, bust and hips, and that any ‘fatty tissue’ on these would disappear if I used a massager which cost a full year’s pocket money. (The Jackie cost 3.5p in 1971.)

I can’t say all the advice in it is bad. Sure, regular exercise and paying attention to eating healthy food is great. But giving teenagers calorie charts; showing them picture of impossibly slim models; and getting them to spend their pocket money on slimming aids is just wrong. The guide was published 50 years ago, and it seems that body image is as much an issue for teenage girls now as it was then; and boys are no longer left out of this. A recent UCL study found that significantly higher numbers of Generation Z boys and girls in the UK are dieting to lose weight, and are likely to overestimate their own weight: the social pressure to be thin continues. It’s not exactly a step forward that young men are now worrying about their weight/shape as well as young women. Social media such as Instagram provide even more opportunities for young women to compare themselves against ideals which are either unattainable or come at extreme cost (emotional, physical and financial). I don’t see much warning of what you might face 50 years later by conforming to the social pressure to be thin in your teens.

And if that doesn’t kill you or make your older age a misery, according to the Jackie guide, ‘a thin body looks marvellous with a tan’. Skin cancer in later life anyone????

Memories of a Girl Unfolding 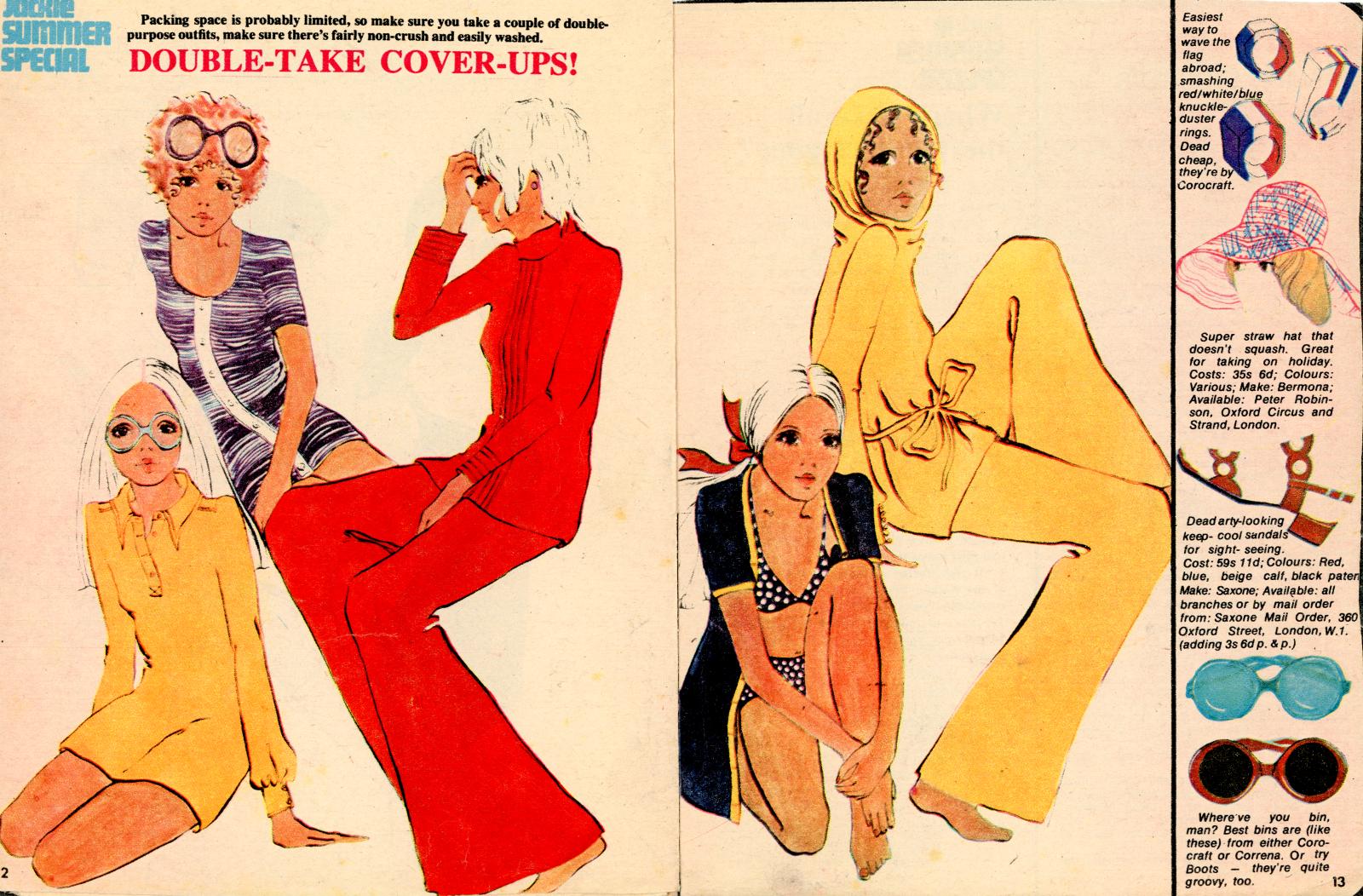 If you enjoyed Clearing out: What a weight to go!, check out Shirley's ten-year journey from girl to woman via a treasure trove of pamphlets in Memories of a Girl Unfolding (above).