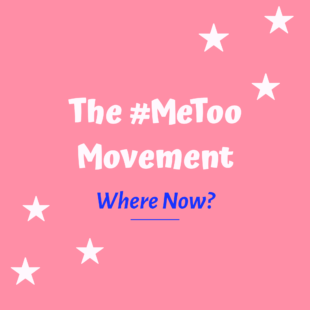 Now that the #MeToo movement has increased awareness of gender inequality and the overall sexual objectification of women, where do we go from here? Given that my research was an honours degree dissertation, I don’t have any profound answers. But I did gain some suggestions from my humble research!

Unfortunately, both the men and women taking part in my research thought that the #MeToo movement had not impacted our societal discourses (that is, how we communicate and converse as a society) enough to change our understandings of gender norms. As an online movement, the #MeToo movement may have been restricted to online discussions and, perhaps, only to those who have access to social media platforms (I will discuss more about the issues of access to social media and the intersectionality of the #MeToo Movement in my next post!). My research suggested that face to face conversations about the #MeToo movement could be key to altering societal discourses. Particularly, the data highlighted the importance of changing our discourses around boys and men. The discourses we use around boys needs to change to prevent them growing up in a society that normalises sexist language. We also need to be courageous in altering sexist discourses already instilled within adults by holding people to account when they are behaving or talking in a way that is sexist. These changes may be incremental at first but it is with the aim of furthering gender equality in future generations.

My research also suggested that education in schools, starting from a young age, needed to play a prominent role in teaching young people about relationships and to bring awareness to harmful gender norms in order to prevent sexual violence. But the most significant suggestion to emerge from my data was raising men’s consciousness.

As discussed in my previous blogpost on masculinity (you can read that here), masculinity plays a significant role in shaping harmful gender norms. In order to ensure that the #MeToo movement alters systemic sexism we must look towards structures of patriarchy which means, looking towards men.

My research stressed the need for men to take more responsibility for their actions as women often feel burdened by having to bear the brunt of responsibility for creating change. After becoming aware of the prominence of sexual violence towards women, some men appear to be willing to share the responsibility with women for bettering gender equality. My research suggested that some men were also rethinking their past behaviours. Thus, the #MeToo movement had triggered critical self-reflection of harmful gender practices, illustrating the importance of the #MeToo movement as a consciousness-raiser. However, even although my research indicated a raising of consciousness in some men, it was arguably a minority of men.

Particularly, my research suggested that although the movement created a moment of rupture in society, it had not gone far enough. Arguably, the #MeToo movement had focused heavily on women’s stories of sexual violence and not enough on the structures of masculinity which perpetuates sexual violence. In other words, my research suggested that the #MeToo movement had, arguably, not gone far enough to penetrate male consciousness and alter masculine sexual scripts which sexually objectify women. Thus, it is important to not only to raise women’s consciousness of gender inequalities but to also raise men’s consciousness. Responsibility for structural changes lies within us all, not just women. As bell hooks put it:

“Sexist oppression…can only be successfully eradicated if men are compelled to assume responsibility for transforming their consciousness and the consciousness of society as a whole” (1984, p.83)

I have one more post on the #MeToo movement coming up in a fortnight. It will be focusing on intersectionality in relation to the movement.

This book will be available in the library when it reopens. But here is a PDF I have found of it!