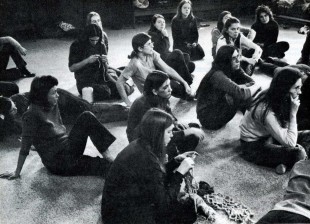 Last week I wrote a blog post to introduce my honours dissertation research into the #MeToo movement. Here, I explored the opinions and attitudes of men and women in the West of Scotland towards the #MeToo movement. One of the most prominent themes to emerge from my research was consciousness-raising which I will be discussing this week.

What is Consciousness Raising?

Consciousness-raising became popularised in the late 1960s and early 1970s during the second wave of feminism. According to bell hooks (2000), women would form groups within their community which provided an important space for them to vent about and heal from sexist experiences. During consciousness-raising groups, a woman would share her personal story only to be met with a chorus of “me too”. Women would undergo an awakening as they realised that their personal experiences were not isolated and, thus, linked to wider social and political structures of oppression. Sharing of personal stories and raising one another’s consciousness set the groundwork for activism and social movements which challenged harmful gender norms.

In 2017, when the #MeToo movement went viral, consciousness-raising was given an online platform. Millions of women across the world used the hashtag “MeToo” in order to share their stories and form a sense of female solidarity, mirroring the consciousness-raising groups of second-wave feminists in the 60s and 70s. However, this time it was not a small group of women sharing their experiences, it was global. Under the #MeToo movement women are visibly awakening to the power structures which normalise their sexualisation.

Findings from my Research

The #MeToo movement as a form of consciousness raising was one of the key themes to emerge from my research. Particularly, the women in my research claimed that the #MeToo movement had made them realise that their personal experiences of sexism were universal. They believed that the #MeToo movement created a global sense of solidarity between women, making them feel less alone in their experiences. Additionally, the women had become conscious of their gendered position in society and were able to critically analyse their experiences, not only in regards to sexual objectification in intimate settings but also within the public sphere, particularly the media.

Women’s objectified bodies within the media pressurise women to look certain ways which can result in low self-esteem issues. As Naomi Wolf (1991) pointed out in her book “The Beauty Myth”, women are taught that it is not their mind, but their body which makes them desirable. If women’s sexualisation is so pervasive within our media, what must this be doing to women’s self-perception? Thus, it appeared from my research that the #MeToo movement was critical to bringing awareness of this to women on a global scale.

Arguably, women’s resistance to sexism must begin with raising consciousness of gender inequality and, subsequently, rejecting patriarchal powers which objectify and sexualise women. Today, the #MeToo movement acts as a form of women’s resistance to their objectification and sexualisation. However, women are consistently up against an unrelenting backlash from heterosexual patriarchal ideologies which dominate our society.

I will be covering the backlash to the #MeToo movement in my next blog post. Here, I will explore some of the reasons behind the backlash and what I uncovered from my research. Look out for that post in two weeks’ time!

Work by the following authors will be available in the GWL library when it reopens. In the meantime, I have found links to PDFs of their books too!

bell hooks (2000) Feminism is For Everybody – https://excoradfeminisms.files.wordpress.com/2010/03/bell_hooks-feminism_is_for_everybody.pdf

Susan Lydon (1970) Politics of Orgasm in: Morgan, R. (ed) The Sisterhood is Powerful

Unfortunately, I couldn’t find any links to this essay but I did find a really interesting Guardian article on Susan Lydon’s famous essay, her life and the use of her work in consciousness raising groups. I highly recommend reading this! https://www.theguardian.com/news/2005/jul/26/guardianobituaries.gender