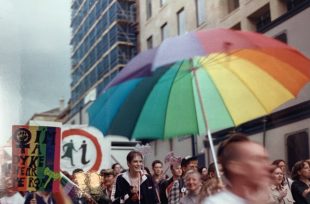 It is impossible to read through the Lespop files without gaining an understanding of the fact that daily existence was often a struggle for many LGBTQ+ people. This is certainly an uncomfortable thing to create a collective identity around and while there is of course no one single factor to link all LGBTQ+ people together, I began to consider one of the more joyful experiences many LGBTQ+ people have and how it is complicated by the implications of oppression threaded through collective history.

I attended London Pride for the first time in 2019. It was a perfect day in a glorious summer. A cloudless blue sky looked down on music blasting from shop windows and whole streets were shut down by people dancing outside pubs. People wore full spectrums of colour and residents of upstairs flats threw sparkling confetti out of their windows. It was truly wonderful to see such a wide variety of people across all age groups out to celebrate all gender identities and sexualities. However, in the mass of rainbows, glitter and day drinking, it was easy to forget that this playful celebration was once a march protesting the right for LGBTQ+ people to exist.

In New York 1969 a police raid on a bar turned into one of the most famous riots in American and world history. The Stonewall riots sparked something that had been building due to years of police brutality, arrests and raids. They marked a turning point in American LGBTQ+ history and triggered the step into the era of Pride demonstrations. It is no coincidence that this took place during the 60s when social movements were taking over the public imagination, and since the first marches in New York, Los Angeles, and Chicago the movement began to spread across the globe – marked in London in 1972. It is essential that we do not forget the violence that shaped the history of Pride. The long years of criminalisation, police brutality, and public disgust still very much influence the lives of LGBTQ+ people today and to pretend otherwise is to ignore how truly radical Pride is.

However, should LGBTQ+ lives be defined by the hatred of those not within the community? Part of the radical nature of Pride has always been to celebrate identities that might otherwise be shunned. To quite literally show ‘pride’ in oneself. The idea of existing out loud in a blatantly joyful way is a protest against those who say you should not exist at all.  And for groups of people who once had to meet in secret to avoid being discovered there is something wonderful about the blatant nature of pride today.

The GWL’s Stride With Pride walk around Glasgow clearly shows this contradiction in LGBTQ+ lives. It takes participants to spots like Glasgow Green and explains that this was once a place where police would hide hoping to catch gay men in the act of cruising. Miller Street shows participants the home of Glagsow’s Lesbian Line which once provided a similar service to Lespop. Equally however it takes one past bars, venues holding drag performances and LGBTQ+ meet-ups. The Lesbian Line itself offered befriending services and monthly discos. The contradiction between political action and meet-ups and celebrations has always existed in LGBTQ+ history so is it so wrong that Pride today leans more towards the latter?

I don’t really have an answer. When considering the implications of having a celebration in the face of vitriolic hatred there is much to be said for Pride remaining a party. LGBTQ+ people can choose not to define themselves by a history of abuse. As I mentioned in my previous blog however hate crimes are rising. The introduction of a Conservative Government led by Boris Johnson does not spell positive shifts for the community and we must continue to be aware of these threats.

Perhaps the goal should be to reduce levels of alcohol consumption or leave less space for banks and supermarkets in favour of political statements. Perhaps we should accept that for a day a year city centres across the country will be taken up by shameless, blatantly queer people playing music, dancing, and taking up space. As long as the fight continues on every other day of the year this does not seem so bad.