Gender Studies placement student Grace introduces us to the collection she worked on during her time at GWL. 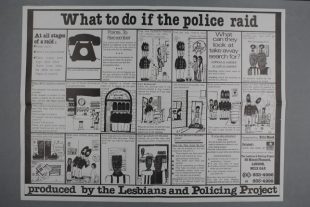 As part of my Gender Studies degree at Strathclyde University I was offered the chance to undertake a placement working with the Lesbian Archives at the Glasgow Women’s library. Looking specifically at the two boxes on Lespop – the Lesbian and Policing Project – I was able to read more about the lives and work of British lesbians during the 80s, a fascinating and somewhat tragic time in LGBTQ history. Focussing specifically on the latter half of the decade this placement offered me the opportunity to gain greater understanding of the lives of lesbians in London and specifically their fraught relationship with the police.

First developed in 1985 Lespop was set up in order to offer lesbians legal advice in instances of police abuse, gathering evidence of ill-treatment and showing that this was an almost universal experience. It was amazing to read about the experiences of women during a time that feels like both a very recent memory and incredibly far away. What interested me most about these archives was the way in which these contrasting feelings existed side by side.

Discussions on the importance of intersectionality and petitions signed with the names of MPs such as Jeremy Corbyn and Dianne Abbot sat alongside heart-breaking stories of women having their children taken away due to their sexuality and groups having to hide documents that would incriminate them if the police raided without warning. In a time when Pride is no longer a protest but a celebration it is easy to forget how recently in our past this abuse was taking place, and this makes it increasingly important to remember the struggles that led to the institutionalisation of the rights that LGBTQ+ people have today. Equally these archives show that it is important to remember that these institutions are not always to be trusted and we must not allow our attention to slip when fighting for equality.

The vast majority of abuse documented in these archives was legal. The Police and Criminal Evidence Act(1984) and Section 28(1988) cast a long shadow over this period of LGBTQ+ activism and have a very clear influence on these documents as discrimination was encouraged and upheld by the government. It was almost eerie to read in detail about the ways in which immigration was becoming more of a concern, how surveillance technology was being used by the police, and how the threat of terrorism was being used as an excuse for greater police control – specifically against Irish citizens. I was not necessarily intending this first blog post to be a criticism of the government today, however I was struck by a quote from a press release from 1988 which stated that,

“in the current climate of increasing hostility towards lesbians created by a wave of fear and ignorance stirred up and fuelled by right-wing and reactionary politicians, there has never been a greater need for an organisation like Lespop.” [1]

It seemed to me that this might be mistaken for a statement made today. In some ways we seem miles away from a time when politicians felt comfortable with such vitriolic homophobia, in many other ways this feels perilously close. Our current Prime Ministers references to ‘Tank topped bum boys’ and a Stonewall report showing a 78% spike in hate crimes between 2013 and 2017 shows we must be vigilant.

When looking at history it is fascinating yet terrifying to see patterns begin to repeat themselves. These boxes provide a wealth of information about the very specific concerns of the day, alongside some scarily recognisable issues. We should certainly not lose sight of the progress that has been made in regards both social attitudes and legal protection however we must always stay vigilant of the fact that the state has not always been an ally. The Lespop files make this fact obvious. I will use this series of blogs to contextualise some of the issues I have discussed and hopefully offer some insight into my observations during my research.