Taya Thirtle is from Norwich England. She is a 15 year-old student who has been racing Speedway since she was 9. Taya is a dedicated rider; it takes her two hours round trip to get to her local track. My first impression was that she was a nice person to talk to over Skype. She had interesting opinions about Speedway- like stuff I didn’t know about, for example the hard time female riders get in a male dominated sport.

My name is Mary Alice and I have been watching Speedway since I was 14 or 15 years old. If you want to review my blog post and learn more about Speedway read here:

I get great enjoyment from seeing the Glasgow Tigers and my favourite rider Craig Cook. I saw Taya race this June in Glasgow with Young Lions team.

I talked to Taya for 20 minutes and some things stood out from our chat. Like the fact that Taya doesn’t want a female only team because she just wants to be classed as a rider– not as a female rider! I was surprised because I thought she would want an all-female team, or even better a league for women, because it would change the sport and make history. Of course Taya has already made history by being the 1st girl to race in the British final. Read more of the interview below:

Mary Alice: Who introduced you to Speedway?

Taya:  My dad took me when I was in a pushchair, so I kind of got used to it.

Mary Alice: Good. Good. What made you want to ride Speedway?

Taya: I mean, I saw the riders a lot when I was very young. And then I started doing grass track when I was four, eventually moved on to doing Speedway when I turned nine, and I’ve done it for the last six years.

Mary Alice: Danny King has had a good season. I read that he is your favourite rider- why?

Taya: He was just someone that I’ve met a lot and because I used to ride in Ipswich every Saturday, I got to talk to him. And he has an amazing riding style.

Mary Alice: I have been a regular Glasgow Speedway track since 1989 -Can you let us know why Glasgow is your favourite track?

Taya: It’s one of the smoothest tracks I’ve ever ridden. And it has this huge banking all the way around it; which no other track has. So it’s just the easiest and also the nicest track to ride.

Mary Alice: What other tracks have you ridden in the UK?

Taya: I’ve ridden most tracks. Yeah, like I rode at Newcastle last year, and I was the first girl to do the British final. So it is a crazy track to ride.

Arran: Is it intimidating when it’s all guys on the track or are you used to it now?

Taya: I am more than used to it. I do a lot of Ladies Days every year. And it’s weird because everyone’s girls and I am so used to being the only girl.

Mary Alice: What barriers is do you face in a male dominated sport?

Taya:  I mean,  I’m gonna get the odd comment, which, I mean, you can kind of expect that to come with it as the only girl and the whole issue is that there’s no female  changing rooms.  I just use the van.

Taya: Difficulties?- like I’ve got injuries from it but never anything particularly difficult… I broke my wrist at Glasgow and I’ve got a damaged spine now, but you just like, learn to deal with it. I have crashes less frequently, but they’re pretty hard impact crashes.

Mary Alice:  Do you get a warm response from fans?

Taya: I mean the fans are always great. When you’re riding you don’t hear them as much because you’re focusing on what’s happening on the track. But it’s like as soon as the race is over you notice everything.

Arran: Do you have people coming up to get pictures with you or your autograph?

Taya:  Yeah. I was at Ipswich and this man came up and asked me for my autograph. And I just went to my dad, “what am I meant to do?” I was like; I don’t know what to do.

Mary Alice: What was your best win? 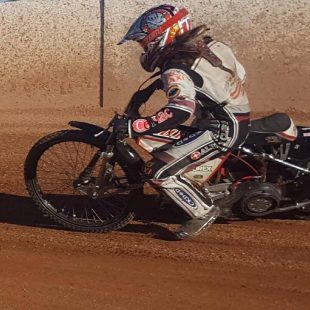 Taya: I mean one of my best races was earlier this year that it was for the amateur team called The Dragons, which mostly races down South of England. And it was it was so cool because it’s the first race I ever did on a 500. And it’s like the first race I had done since I was in the final. And I came second. And I am like, ‘this is a great feeling!’

Mary Alice: Do you think there should be an all-female team?

Taya: Personally, no. I don’t want to be seen as just a female rider. I want to just be seen as one of the riders. And you can see it in other sports, where there are issues with a female league. But unlike with football, where its physical strength…in [Speedway females] might have an advantage, because we’re smaller and lighter, which is important in Speedway.

Arran: Why are there so few girls, women in the sport?

Taya: In every sport, really anything where you can get messy. It’s always been male dominated, even with football. Like you have these female leagues, but it’s still very, very male dominated. And with a motorbike, in particular, we refer to a motorbike as a female because it’s like a man’s possession.

Mary Alice: Do you have any other hobbies?

Taya: It’s sad but no. Growing up I did football, roller skating, dance. But now I just do Speedway. It’s like very much a full-time hobby, like you’ve got to clean the kit, clean the bike, and repair the bike. And repair any damages because there are always damages on a Speedway bike.

Arran: So have you learned a lot about mechanics and stuff then as a result of racing?

Taya: Yeah. I’ve learnt a lot about mechanics. Like at the moment, I study engineering in school. It’s always been really helpful because I’m learning this stuff outside of school. It’s actually helping my work in school.

Arran: Do you plan on keeping on racing?

Taya: Yeah, 100%. I want to be one of the first professional racers. Since I first started I have wanted to be the first female to ever race Cardiff.

Taya also added that she would like to say some important Thank Yous:

Taya: So there is Allan Critcher who has always been very supportive. And he helps me with everything to do with Speedway.  My Nanny and Grandad have literally come out and supported me since I did grass track as a little kid. And then there’s this local bike shop in Norwich called Danny D’s, who has also supported me since I did grass track and I will forever be grateful for everything he has ever helped me with.

Taya riding on her bike I am Ready. If anything happens I am just always going to be here. I’ve done it for 11 years.

Coronavirus and caring for our community: From 5pm, Wednesday 18th March, GWL will be closed until further notice.
More information about our response to the Covid-19 situation can be read here. Dismiss