Glasgow Women’s Library are delighted to host Disruption is Fertile: How Ecofeminism is Pushing for Change with Take One Action Film Festival on Saturday 28th September. Ahead of the event we hear from Executive Director Tamara Van Strijthem who reflects on the importance of female voices being at the very heart of the festival, both behind and in front of the camera.

Take One Action Film Festival returns to Glasgow and Edinburgh next week for their 12th festival, bringing 12 days of exceptional international cinema and inspiring conversations to venues across each city. Find out more here.

With the state of our planet – and the interactions between some of its inhabitants – sending many of us into a pit of despair, Take One Action’s Film Festival offers a much-needed opportunity to understand, celebrate and harness our power for positive change.

With over 40 films from 22 countries, the titles we present do not shy away from stark realities – yet there is joy and inspiration to be found in the commitment, resilience and solidarity at the heart of the stories we share. From climate action to refugee rights, our programme celebrates the people and the films that are changing the world.

For several years, Take One Action has placed a strong focus on women’s empowerment – on screen, behind the camera and in the conversations we nurture. For a third year running, over 50% of the films we present have been directed or co-directed by women, while our Sisters Strand (which is supported by our partners Engender) celebrates female trailblazers from all walks of life – politicians, journalists, lawyers, health workers, youth activists, union representatives… – who are pushing for radical change.

We are thrilled to be marking the last day of our festival in Glasgow with Disruption is Fertile: How Ecofeminism is Pushing for Change an empowering and celebratory event, held in partnership with Glasgow Women’s Library, which will explore the concepts, dynamics and approaches at the heart of ecofeminism. Facilitated by writer and activist Mairi McFadyen, the afternoon promises to pack a lot in, including an opening provocation by journalist, artist and activist Layla-Roxane Hill and participatory workshops with Glasgow Women’s Library’s Museum Curator Jenny Noble, Global Justice Now Scotland, and poet Nalini Paul. Can feminist approaches influence the ways we care for the planet and its inhabitants? How does the environmental movement reflect gender, class and racial dynamics? Does climate chaos call for radical action – and, if so, on whose behalf? Amidst the noise of urgent demands, whose voices are not being heard? Join us at the Glasgow Women’s Library on Sat 28 September to explore these questions.

So, if you want to discover stories of the women who are changing the world, and explore your links with what unfolds on screen, join Take One Action at our 12th festival! 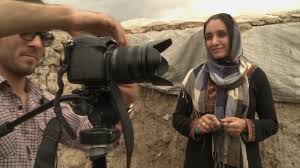 With recent gains for women and the country’s fragile democracy hanging
in the balance, Facing the Dragon pays tribute to two Afghan women’ determination to change their country from within – and to the energy women the world over are
pouring into addressing power imbalance.
Presented in association with Engender, Mercy Corps and Christian Aid.
Screened with Closed Captions (BSL interpretation on request)

THE FEMINISTER
Thurs 19th September | 17:50 | Filmhouse, Edinburgh
Fri 20th September | 19:30 | CCA, Glasgow
This gripping chronicle of politician Margot Wallström’s first four years in office as Sweden’s Minister for Foreign Affairs provides remarkable access to the corridors of power. At a time when so much of our political landscape is dominated by brash (male) egos, witnessing such a skilled diplomat’s intelligence and determination feels like a radically hopeful act.
Presented in association with Engender.
Plus short: Safe Space (Ben S. Hyland | 8 min | 2018 | UK)
Screened with Closed Captions (BSL interpretation on request)

This portrait of a teenager finding her political voice in a community ravaged by a fracking disaster offers a rousing tribute to youth activism and to the role of education in empowering young women.
Presented in association with Global Justice Now.
Plus short: Máxima (Mariel Sosa | Peru / USA | 2018 | 16 min) 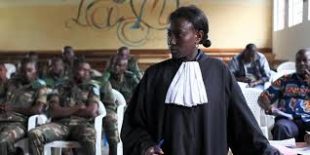 Through personal testimonies and footage of courtroom proceedings, The Prosecutors documents three lawyers’ fight to end impunity for sexual violence committed at times of war. It explores, with respect and determination, what it takes for victims to obtain justice and celebrates the bravery of those who come forward, while demanding a wider framework of accountability.
Followed by a conversation with Olaoluwa Abagun (Girl Pride Circle Initiative, Nigeria) and representatives from Scotland’s women’s sector working for feminist justice systems
Presented in association with Engender.

SCHEME BIRDS
Tues 24th September | 17:45 | GFT, Glasgow
Wed 25th September | 18:00 | Filmhouse, Edinburgh
In the Motherwell housing estate where she grew up, teenager Gemma says scheme birds like her either get “locked up or knocked up,” so perhaps her path is set. As Gemma’s life twists unexpectedly, the film follows her and the people in her life. Lyrical yet unflinching in its gaze, this heartbreakingly tender documentary asks what causes a person to change—and whether it’s ever too late to do so.
Followed by a conversation with producer Ruth Reid.