Follow our campaign called #WomanOfTheWeek. Each week we will focus on a new, important female writer and post about her and her work. We will be highlighting the lives of the well-known, groundbreaking feminist writers, as well as the, sometimes, lesser known female authors. Feel free to contribute! We would love to hear your input as to what female authors you want to learn more about/or perhaps teach us about.

This week’s #WomanOfTheWeek is Joan Ure and she was chosen and written about by GWL Volunteer Annie. 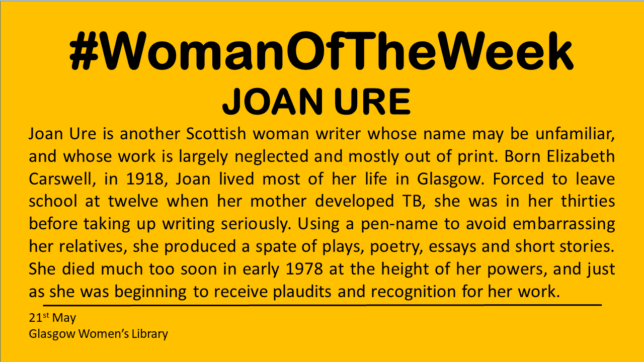 Joan Ure is another Scottish woman writer whose name may be unfamiliar, and whose work is largely neglected and mostly out of print.

Born Elizabeth Carswell, in 1918, Joan lived most of her life in Glasgow. Forced to leave school at twelve when her mother developed TB, she was in her thirties before taking up writing seriously.

Using a pen-name to avoid embarrassing her relatives, she produced a spate of plays, poetry, essays and short stories. She died much too soon in early 1978 at the height of her powers, and just as she was beginning to receive plaudits and recognition for her work.