On Saturday 30th March, 65 women came together at the ‘Our Space, Our Place: Creating Ecofeminism’ event at Glasgow Women’s Library, to discover and explore positive and creative responses to our changing environment, climate and world.

Here, two of the organisers, Saskia and Ali, tell us about the day . . .

Ecofeminist theory and practise has become increasingly relevant with the rise of environmental crises, and with the negative effects of climate change disproportionately affecting women. Alongside this, movements such as veganism are growing rapidly, and the connection between environmental science and these political and ethical ideologies has been marked by recent publications such as Practicing Feminist Political Ecologies (2015). Our Space, Our Place brought together researchers, activists, artists, and the public to share interdisciplinary research and practise methodologies, in order to engage with pressing environmental feminist issues at Glasgow Women’s Library. The event was co-organised by Rebecca Jones (Glasgow Women’s Library and University of Strathclyde), Ali Ryland (University of Strathclyde), and Saskia McCracken (University of Glasgow), and was funded by the University of Glasgow’s College of Arts Collaborative Research Award. 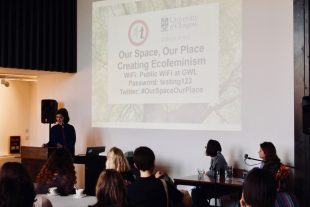 After a warm welcome by GWL’s Rebecca Jones, the event kicked off with a Historical Perspectives panel, which taught us that ecofeminist practise is much older than it might at first appear. Activist Evelyn Suttle took us on a journey through the lives of fifteen suffragettes and women’s rights campaigners who were also animal rights activists. These women are often omitted from histories of the animal rights movement, and their work in this regard barely crops up in their biographies (which focus on their feminist achievements). Elizabeth Darling (Oxford Brookes University), brought things closer to home, focussing on women-led and women centred social reform in Edwardian Edinburgh’s Canongate. These proto-ecofeminists developed kindergartens in the slums, creating green spaces for working women and children to learn, socialise and garden together. Both speakers revealed hidden proto-ecofeminist histories that set the scene for the rest of the day.

Keynote speaker Niamh Moore (University of Edinburgh) discussed the competing views of birthstrikers (those who refuse to bear children to spare the planet) and those who believe that the future of the earth lies precisely in the actions of children and young people. Niamh drew on oral histories she gathered from an ecofeminist Canadian peace camp set up in 1993, exploring the tension between the anti-essentialist ecofeminism of academia, and women-led eco-movements that consider maternalism to be profoundly important. While such tensions are not easily reconciled immediately, Niamh highlighted the importance of understanding a variety of ecofeminisms, emphasising that one can avoid biological determinism yet still incorporate motherhood into ecofeminist theory and practice.

After a delicious vegan lunch provided by McCune Smith, we moved onto the Mythical Presences panel, which engaged with the ways that women are often connected in myth to (mother) nature. ClartyBurd Theatre Company performed Bernini’s Women (Bernini was a sculptor known for his mythical figures). The play follows three actresses as they audition to play Mother Nature, but are found to be too maternal, or not feminine enough, revealing the impossible stands of such archetypes, and the difficulties of acting as women in a male-dominated industry. Curator Frances Davis (University of Edinburgh) took us on a tour of works by women artists in which women’s bodies and women’s labour are closely intertwined with the fronds and stems of plants and trees. I had no idea that one artist had grown a field of wheat in Lower Manhattan within view of the Statue of Liberty! By tracing this visual history – one that focused on identity, globalisation, migration, and the exploitation of natural resources – Frances revealed what feminist scholar Sara Ahmed calls “feminist bricks and feminist memory” in ecofeminist art.

Finally, we enjoyed the Environment and Practice panel. Gardener Kirsty Alexander (University of Stirling) took us back to gardening, introducing us to eco-friendly power tools and insecticides (i.e. birds), and the potential that gardeners have to cultivate spaces (providing their customers agree) that welcome wildlife and encourage people, plants, and creatures to flourish. Practise-based researcher Rachel Clive (University of Glasgow) brought the day to a close with her reflections on rivers, risk and resistance, offering us tantalising glimpses of her ecofeminist films, including pAnarchy, which explores environmental issues through contemporary dance. She invited us to join her in embracing the ridiculous, and with Kirsty, in approaching ecofeminism with a sense of hope. 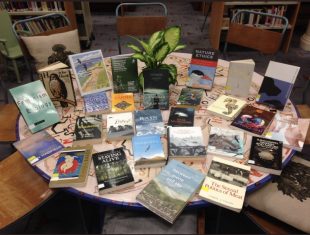 Throughout the day, people dipped into artist Hana Wilde’s exhibition Witch Island, a collection of ink drawings, embroidery, and quotes (from written and oral histories and archaeological records). This work tells the story of an island, Eilean Na Circe (Hen Island, locally known as Witch Island) in Loch Scotnish, Argyll, and the woman exiled there for ‘turning bad’. Attendees also browsed GWL’s display of ecofeminist books that feature in their recently developed ecofeminism and Women in the Landscape library collections.

“Spending a day surrounded by likeminded women – having time to browse the library too!”

Overall it was an uplifting event, despite dealing with difficult issues such as climate change, birthstriking, and environmental crises. The feedback we received from participants was overwhelmingly positive. Attendees told us they felt empowered, optimistic and really cheered by the event, enjoying the variety of approaches, the sense of community, and meeting other women interested in ecofeminism.

Or, as one woman put it, “Women together, presenting ideas, innovating, holding space for each other and generally kicking ass!”