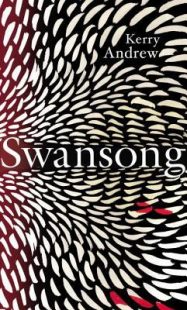 Swansong by English musician Kerry Andrew has been a fascinating read for me. After being recommended the novel by fellow volunteer and magnificent lady Jay A, whose review of the novel you can read here, I picked up Swansong with great expectations. I initially, for some reason, thought it would be a gritty, dark and sexy story starting off in a Scottish tavern but it in fact was revealed to be something else entirely.

Settling in the Scottish Highlands, English student Polly Vaughn is running away from something terrible she’s done. She stays with her good-natured mother and in her exploration of entertainment in the form of a barman and drugs she slowly begins to find the Highlands an eerie place, soon striking up a companionship with a strange local man.

Swansong’s biggest strength is in its voice. Polly is snarky, with humorous undertones, and undeniably honest. Though I must admit that it took me much too long to get through the book- I spent many days opening it, reading a page or two and then closing it for another day. I have a suspicion that if I were not stubborn in wanting to finish the novel and give my full thoughts on the novel for you all, that I would have dropped it. The story really just takes a while to really unwind and picks up its pace in the last third. That is when I flicked through each page, wondering what on earth was happening.

What’s interesting to me is Andrew’s musical background which seeps through into her writing. The novel itself is almost a retelling of an old Scottish ballad told through the eyes of a modern day heroine. Andrew filters the  magic and myth of the original song into her story, creating a world that starkly juts against Polly’s narrative but doesn’t quite fall apart. It’s atmosphere and mood calls forth the distant memory of Robert Jenkins’ The Cone Gatherers, also set in Scottish forests.

I do have some mild complaining to do though, a nitpick, if you will.

As much as I was intrigued I grew tired. Andrew is enamoured by the use of similes. She does use them effectively in places, striking up some lovely and eminent imagery but getting through each page and trampling across nearly three on each was exhausting. It became so overwhelming that it took me right out of the narrative. If this was a stylistic, lyrical choice, then I do not think it quite fits with the style of a novel. Perhaps if some were left out to let the truly powerful ones shine then it would have added to my enjoyment of the book. I suspect this issue with the imagery is what kept me from reading continuously through majority of it, and only when the story became more prominent did I charge through them, in search of answers.

Regardless of this flaw and it’s unsexy tone, I found the conclusion of Swansong leaving me a mixture of maddened by the truths and relationships, impressed by the simple retelling of the ballad, and then pleased for the two main characters’ positive developments. Andrew has a knack for dry humour and interpretation, and with her debut novel Swansong, proves she is a versatile artist.