On a lovely sunny day on Thursday 26 July 2018 the Seeing Things group met at Buchanan Bus Station for a trip to Kirkintilloch Town Hall.

Artist Elspeth Lamb worked with participants from East Dunbartonshire Women’s Aid and Senior Pupils at Kirkintilloch High School to create an exhibition showcasing the life of Rita Cowen, known as the ‘mother’ of Japanese Whisky.

Rita was a Kirkintilloch woman who met Japanese student Masataka Taketsuru when he came to Scotland to study the art of Whisky making.  They fell in love and, despite strong opposition from both of their families, they married, set up home in Japan and founded one of Japan’s most successful and best known Whisky distilleries.

The exhibition featured original art work created with an ‘Alice through the looking glass’ theme representing the huge cultural change Rita went through moving to Japan and embracing their culture.  There was also a creative film, made w 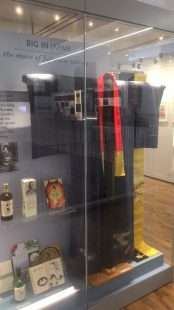 ith the students, telling the story of Rita’s life and journey to Japan.

We were very lucky to be shown around by Jennifer, Heritage Coordinator at Kirkintilloch Town Hall, who was very welcoming and knowledgeable on the exhibition.  She was also kind enough to provide tea, coffee and biscuits for the group and joined us for a chat about the exhibition.

The group found Rita’s strength of character and courage particularly interesting as was the display of her Kimono (which is permanently on display in Kirkintilloch Town Hall).  They also commented on the beautiful building which has recently been through a full refurbishment.

Having learnt about the life of Rita Cowen we are hopeful that there will be more research and telling of her story in the future and look forward to hearing it!