In Spring 2017 the artist Lauren Printy Currie completed a three month residency at GWL. Lauren’s new Travelling Gallery exhibition, Her body remembered a night-blooming cereus, sweated industry and salt (what came near), which was inspired by her time at GWL, is now touring the length and breadth of Scotland. Here, Luba the GWL national lifelong learning intern tells us about life at GWL and on the road with Travelling Gallery…

“Have you ever seen an art gallery in a bus?” 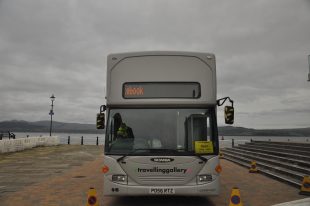 It’s not always the first time for everyone who visits Travelling Gallery. Some people are constant companions, but most of the young and old visitors just ‘pop in’, curious about such a big painted bus in front of their local library or community centre, on the school yard, next to the big shopping centre or just in the middle of the main square of their town.

The first time I saw the bus was five weeks ago in Inverness. I’d just started as an intern at the Glasgow Women’s Library, had met so many interesting women and was still trying to remember all the names. I was so incredibly excited about all the new experiences and full of anticipation to finally see the Travelling Gallery bus. But it turned out to be not more than a quick glimpse because my train had a massive delay and as soon as it arrived, I had to go back again! 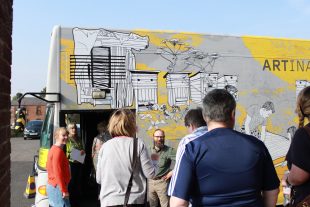 In the five weeks since, I’ve had the great chance to accompany not only the Travelling Gallery bus and amazing staff members, but also my colleagues from the National Lifelong Learning project who facilitate different workshops during the TG tour. Reflecting on the last months I cannot not think about all the amazing people who are involved with the project. Sometimes it’s just a smile that makes visitors feel comfortable but sometimes it needs the right words to motivate people to come in and stay for a while. 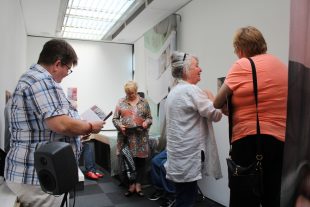 Another thing that fascinates me about the bus is its open space. The word open might be a wee bit misleading, as the Travelling Gallery’s space is neither spacious nor open air.  But it’s open to everyone, it’s accessible and what is most important, there are no preconceived, standardised opinions to take away. It is ‘open’ to be ‘not your cup of tea’. But there will always be someone who’ll give you an introduction, show you some – hopefully interesting – details, talk and listen to you. 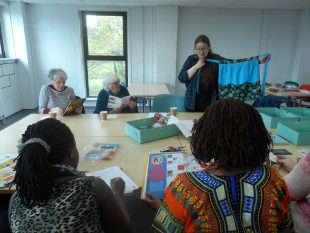 And in that sense, this Travelling Gallery autumn tour 2017 that is a joint project by the Travelling Gallery and the Glasgow Women’s Library is a special one. Not only because the exhibition by Lauren Printy Currie is by itself a beautiful contemporary art response to the Women’s Library and its archive, but also because the Women’s History Unwrapped workshops that are facilitated by the Glasgow Women’s Library staff create an important safe space where women are heard; an inclusive and inviting space where women’s groups can meet and work on questions of local women’s histories and also individual women can come along too.

In these workshops women from different urban and rural communities around Scotland have the opportunity to see some objects from the GWL archive and remember, collect and celebrate the heritage of local women that too often remains untold. 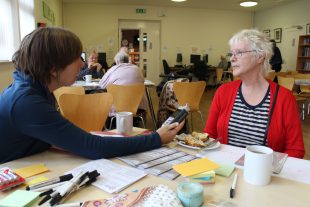 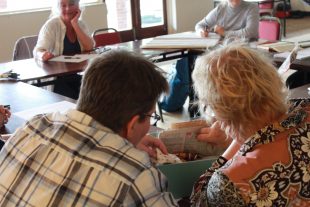 It’s amazing how many moving stories we’ve heard during the last weeks and how many revealed herstories we’ve recorded, that too often were introduced with “I don’t think that I have something to tell!”

Oh yes, you definitely have!

The GWL/Travelling Gallery tour is funded by the HLF Scotland Stories, Stones and Bones fund and by Outset Scotland. GWL’s national lifelong learning project is funded by the
Scottish Government.