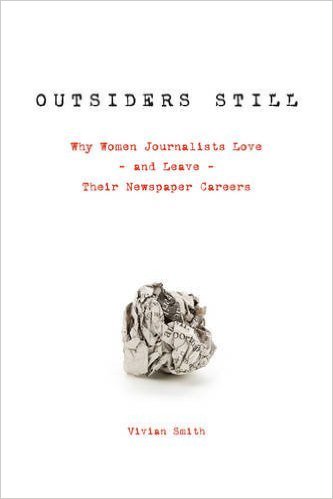 The book Outsiders Still: Why Women Journalists Love and Leave their Newspaper Careers is a 2015 book by Vivian Smith that explores the experiences of women in the newspaper medium and how their contributions and possibilities have been shaped by gender politics of the time in which they work alongside technological developments. Smith considers the experiences of women at different ages and positions in the newspaper hierarchy seeing how changes have influenced successive generations of female journalists.

The first chapter “Are you Still Here?” sets out the context of the work discussing both the history of and contemporary state of journalism ,in general, and in relation to women. Smith describes how her pregnancy in 1987 led to jokes by her boss which stuck out to her with him inquiring whether she was still there working for them. She discusses an idea that will pop up consistently in the interviewees answers…The idea of a supposed choice and freedom for career women in journalism and the media and the reality that it has for most of its history been an inflexible, patriarchal and incredibly masculine domain.

Smith notes this can be seen in the disparities between women studying journalism and those who reach any position of authority in papers if they even make it that far. Constant hurdles exist. While journalism courses at the University of Ottawa since 2001,for example, have had 80% women in their courses, women in the USA only account for 24% of journalist supervisory roles.To Catherine McKercher at Carleton University in Canada the difficulties in media economically have left many women to be be bought out,laid off or denied full time work with freelance the one possibility.Over the last thirty years the pay by word has not changed with nothing to $1 the going rate and digital content farms have only increased the lack of profits possible. In America only 1/10 of freelancers make £30,000 or over while for Canadians she discusses a 2014 Jones rate finding the annual wages there were smaller at only £25,000. This is something Smith herself relates from personal experience noting how she had to take up freelancing due to motherhood.In an increasingly shrinking newspaper business the jobs on offer and accompanying pay-cheques grow ever smaller for women. The “well paid union rate print only journalism is dead” and its certainties with it she suggests.

In addition to this she argues another excluding factor for women in media is and was related to the gendered connotations tied to certain subjects covered in papers. In many cases until recently it was mostly men who were in the position to decide what stories were reported and gender based attitudes impacted this. Kim Bolan who started at the Vancouver Sun 25 years ago told Vivian Smith how female interns were checked for bras, sent to air shows to make them throw up, told to do features at places like nude beaches were clothing was optional to embarrass them and were never given male beats like legislature and politics. When Bolan covered terrorism and organised crime for the Sun she was hounded by people via mail due to her being a mother and the subject being seen as too dangerous for her due to this. A mother reporting on the same topic as a father in an article was judged heavily if they even attempted it at the time. Instead Smith discusses how ,quoting Beam’s 2008 work, women and other minorities have often been attracted to covering social issues affecting them and others and judged these topics as their best pieces. However at the same time social pieces have been seen as less laudible than areas like politics and legislature often covered by men and such areas in addition to those like media and cultural pieces have been deemed soft news.  Smith ends her introductory chapter turning from the modern factors impacting women in newspapers like sexism, economic inequality and what content is covered to a consideration of media women’s history. The historical canon she states has ignored them. Three women deserve their stories to be better known and show the everchanging character of work for women in the field that still exists. The first mentioned is Kathleen Kit Coleman(1865-1915) who started writing on domestic topics in Women’s Kingdoms in 1889 and Toronto Mail in 1895. As an educated ,but destitute Irish immigrant and single mother of two,  journalism was a necessary income for her family. Barbara Freeman, her biographer, notes that thought she was a transitional figure in Canadian journalism and a pioneer she always felt the need to fulfil the expctations of her editors and the public regarding what she wrote about as there was a creative tightrope for women. She could represent an older wiser more wordly woman who could advise readers and give them deeper understanding of their own lives. Though she seems to have believed in gender equality she never wrote of it due to such factors and her need to earn a wage which would have been impossible if she mentioned suffrage which her papers opposed. Instead she combined her wish for female opportunities ,by encouraging women in her columns to get paid work or writing of sexism by Toronto shopkeepers who paid starvation wages to girls, with a commitment to national sentiments by becoming the first president of the Canadian Women’s Press Club. Following in her footsteps would be those like Lotta Dempsey(1905-1989) who became a cub reporter at Edmonton Journal and wrote in her 1976 autobiography ,No Life for a Lady, about how there was a common wisdom that journalism was not a career pursued by ‘decent women’. Smith’s first chapter consequently sets into context the myriad of factors past and present that have influenced her and other Canadian journalists over the last fifty years.

Her next three chapters focus on the different groups of women by age and position starting with the senior women who she calls “so stuck yet so lucky”. Almost all were white middle class women with degrees  and five were mothers. Aged from 49-61 they were of the generation called second-wave feminists and had to accept aspects of sexism in their work system and lives ,but would fight against avert displays. Luck was vital to their success they stated. The mid-career women continue the lines of thought from before. Only one women in this group was black and the white women who made up the rest describe privilege. All at this stage in which the highest echelon has not been reached yet progress has been made professionally described the tug between work and family resulting in the need to self-sacrifice. Five of the nine had one kid atleast and all described workplace inflexibility as impacting motherhood with the non-mothers worried about future inequality if they chose to start families. This middling group also represent the changing nature of content done by women with many not originating from the social, arts or entertainment side of news. All describe themselves as stuck between the baby boomers not retiring and the amibitious upcoming female journalists below them. Instead of having it all they conclude that at this stage in their careers and lives they are doing it all instead. The last group of women interviewed are those just starting out in the business. For them gender discrimination is second to a bigger problem. The uncertain future of print journalism in the modern world. The selection talked to were still mostly middle class and white with post-secondary educations ,but none had kids and none a mother who had been a housewife. Most had started in hard news showing the opposing state of content chosen or accepted for women by modern times. Increasingly personal opinion pieces are accepted as non-personal works Smith notes and personal identity thoroughly explored. Tying all groups together is a feeling that any progression professionally is tied to luck not talent for them as women.

Looking at the women as a whole Smith concludes the piece in her final chapters exploring the way that women have had to battle to enter the male areas of journalism including the board room and management ,their fight over content,the challenges between choosing work,family or both and the feeling of imposter syndrome so many of the women have no matter their privilege… The feeling they are lucky to be there or succeed not that they have earned it through their devotion to journalism. In her book Smith consequently produces a thoroughly thoughtful and in-depth piece that shows how women in journalism have shaped the job and been shaped by it in the past and present and how as time progresses new barriers and challenges often arise to replace those that have been fixed. She shows the manner women are slowly changing the business and producing a new type of journalism in addition to entering spaces they were once excluded from ,but that only as long as they stay in the job with the inflexibility of it for mothers and family life alongside the fragility of print journalism as a profitable job in the modern day being major factors that make them leave. As long as the system stays the same even the most successful women featured will be “outsiders still” and change consequently must happen.