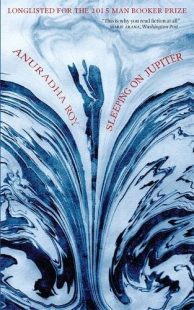 In August, GWL Digital Book Group read Sleeping on Jupiter by Anuradha Roy, winner of the 2016 DSC Prize for South Asian Literature. It was a stark and unflinching novel by a spellbinding storyteller, about religion, love and violence in the modern world.

Readers pulled together some questions and we put them to Anuradha who kindly agreed to share her thoughts with us.

Was there a reason that you chose to write the novel in English – was it so that you could reach out to Western audiences directly rather than relying on translation? Or for a much simpler reason?

Britain colonized India for over 200 years, and the one good thing we got out of it is that English is as much an Indian language now as any of our other languages. I’ve always written in English, as do many other Indian writers. It is the language of the elite here, but many do learn it from childhood and many speak interchangeably in English and other Indian languages at home.

Why did you choose to have the ending you did, which means that we have very little understanding of what effect Nomi revisiting the scene of her childhood suffering had upon her?

I wanted to end the book when there was more to be said: when everyone’s inner lives had been altered by what had taken place yet there were still things that might happen to them. I wanted to stop at a point when I felt I could close the door and say, this is as far as I am letting you in, no further.
Books can go on forever, dragging everything out to tedious clarity, but I think readers are intelligent, they create a part of their book within their own imagination, and I need to leave them alone to do that. I love the endings of Alice Munro, for example, which deepen the mystery rather than clarifying everything, and leave me thinking about her stories for ages.

Some of our readers wondered whether you meant us to think about our own society’s hypocrisies in response to the novel’s focus on Indian society?

I’m glad your readers saw connections to their own lives and society. I think that structures of religious power are misused everywhere, and hypocrisy is pretty much a universal human trait.

Your writing is just beautiful and doesn’t flinch from the realities of violence – how did it feel to write about violence like this?

It was very, very hard. The book took me a long time to write – I started it in 2008 and only finished it in 2014. The material was so deeply unsettling and painful that to sit myself down and force myself into those dark spaces felt unbearable at times. But I knew that if I didn’t finish writing this book, I would never be able to move on.