One of the few things I never had to worry about during my time at school and university had been pens. Not only that I had been provided pens by my classmates, who regularly left them on or under the table; but also my parents, some always-busy aunts and uncles, charity shops, street festivals, recently opened shops and many other people and places have contributed to my diverse drawer-collection. From a professional point of view my tiny wooden table commode can’t meet the standards of a proper archive: an inappropriate storage, missing documentation or donation protocols. In one word: pure chaos. And the archive’s simple motto: functionless – disposed.

Nonetheless, the circumstances of the latest donation shed new light on my collector’s items. It was Friday morning and I just entered the event room at the GWL, still sweating after my bike-ride to work. The room was already prepared for the Engender Conference, decorated with striking cloth bags that were laying on each chair. I picked one and I literally heard it saying: ”I’ll keep your stuff together!” Good idea these cloth bags, I thought. And of course, a pen wasn’t missing, too.

The conference started, many inspiring women talked on the stage and interesting and challenging questions were raised. With this unused pen in my left hand, I zoned out for a moment. While a smooth voice talked about “challenge”, “activism”, “fight” in the background, an idiom came to my mind: “A pen is mightier than the sword”.

Certainly in a world of social media, voice recognition and artificial intelligence the comparison this idiom undertakes seems a little bit archaic. Swords are definitely objects I’d locate in a museum rather than in my everyday life. Nevertheless, what the idiom highlights is the power of writing. Less metaphorical the scholar W. J. Ong describes his view on this powerful impact of writing.

“Without writing, the literate mind would not and could not think as it does, not only when engaged in writing but normally even when it is composing its thoughts in oral form. More than any other single invention, writing has transformed human consciousness.” (W. J. Ong in Orality and Literacy: The Technologizing of the Word)

So this fragile, half-transparent and not very appealing object I was holding in my hand is probably the most intriguing invention when it comes to humankind.

Another question came to my mind: What would a person that had never seen a pen before think about this longish tiny “something”. Would this person believe that there is liquid coming out even if it’s invisible? That it’s refillable in some cases but always meant to be written with. That the main purpose of its invention is to write words, that can’t be erase easily.

Discussing Scotland’s feminist future the pens in the cloth bags stand metaphorically for the power of change and especially in regard to the organisation Engender that provided us with them. They embody the power to influence policies and political debates. Coming back to my imagined person that had never seen a pen before, would she be satisfied with this answer, given so far? Having a closer look at this half transparent and half purple plastic pen, wouldn’t she ask about its colours, material or its technical characteristics? Wouldn’t she like to not only write with it but also to take it apart? 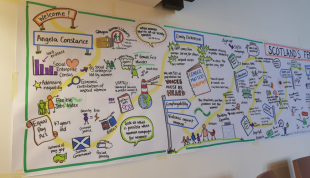 It’s not only the history of literacy which this pen talks about. From a technological perspective it’s a writing instrument that exists among others: ink roller, pencils, writing feather, fingers dived in paint. But it’s also a writing instrument that has become widespread in a certain geographical region to a certain time, whether by coincidence or for a purpose. It also tells the story of hand typing and raises a present day debate about its meaning in a digitalized future.

Looking at its design, it’s impossible to think about pens without considering topics such as mass production and consumption and connect it to modern debates of ecology and sustainability. How many thousands of years does this sole pen need to decompose or to put in into polemic terms, what’s the probability of this plastic pen to ending up as rubbish in the North Sea? And in what way can I contribute to ensuring this doesn’t happen?

Moreover, its appearance reveals its use as a medium of communication. It’s surely not mere happenstance that “ = ENGENDER “ is printed on the pens. It’s a nice reminder of an important conference but also an advertisement, as if the pen is yelling “promote Engender!” As a pen it’s there to write with but through its own texture it’s already transmitting a message. And as a hidden clue its purple colour connects our feminist generation to the achievements of the Suffragettes movement.

It’s lunchtime at the conference. I put all my stuff back into my bag and slowly begin to collect my thoughts. My mind is full of pens and literally blue of so many thoughts circling around ink. Standing in the queue to grab some sandwiches my glance falls on the bookshelves of the Women’s Library. What did the “women on the shelves” feel when they were holding a pen to write? I thought. Did they realise how big their impact would be on us? 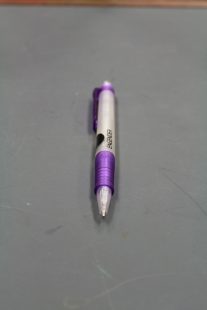