It is over two years ago now that I first visited the Glasgow Women’s Library and it truly was love at first sight. A combination of gender courses that I had taken previously and this visit shaped my decision to focus my history dissertation on women’s experiences of contraception. Fondly reminiscing now I can remember being nestled in a corner of the library, going through the rich family planning archive, whilst listening in on poetry readings, live music playing, art workshops crafting and book-clubs discussing: soaking up the electric atmosphere of positivity and inspiration from these creative women.

Fast forwarding two years on, I am now studying a Masters in Museum Studies, and I got my dream placement of working and being a part of the GWL. A condition of my placement is to conduct research and write a blog post on some objects from the collections. So, given my previous history with the GWL, I thought it only fitting to do my blog about the topic which brought me to value the library so much. As well, the recent events around the world regarding abortion and reproductive rights, provide infuriating examples of why it is more important than ever to continue campaigning for reproductive rights. So, without further-ado, let me start by stating that as a feminist and as a woman it is crucial to me to have complete control over my body: this to me is a basic human right which every woman is entitled to. However, this is far from the in case, even now in 2017.

At the end of 2016 Poland were proposing a total ban on abortion but thousands of women defiantly went on strike and “Black Monday” went global. Ridiculously, women found to have had abortions would be punished with a five-year prison term under this ban.[1] Thankfully, under massive social pressure from the protests, the lawmakers voted against it overwhelmingly 352 to 58.[2] Reason and sense prevailed, yay! It was reported that the protestors held signs with messages stating “keep your rosaries off my ovaries.”[3] Excitingly, the GWL have a badge in their museum collection which has this exact message on it.

Poland inspired activists in the Republic of Ireland to follow suit and they went on strike just this month. Amazingly, through my research I have discovered an online gallery called X-ile which features women who have had abortions from Ireland to try and reduce the stigma attached and raise awareness.[4] Art has always been and always will be one of the best ways to express human emotion and to prompt discussion regarding taboo subjects.

Now, I feel it would not be right to mention the recent events in the USA under the order of “he who shall not be named”. The global gag rule which was put in place under President Ronald Reagan in 1984 and has since experienced a volatile on/off existence is yet again back on under Republican authority and refuses to provide funding for any reproductive authorities who give advice about abortion.[5] This action came just two days after massive women’s marches around the world. One women tweeted “we won’t go back to coat hanger medicine”[6] which harrowingly refers to a method desperate women can resort to. 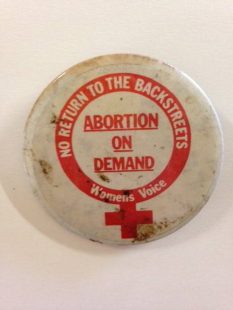 This visibly dirty and evidently very well-worn badge is a simple yet powerful way to show society what your political alignments and beliefs are in a respectful and fun way. This slogan refers to illegal and unregulated abortion methods; these ‘backstreet’ clinics can be very unsafe for women and can result in death in extreme cases. The coat hanger method is perilous and is not necessary with modern medicine.

An example of the global impact this will have is in India as there are 11 million abortions in the country – out of which five million are unsafe – even though abortion is LEGAL in India.[7] In some areas, 80 per cent of women do not know this astonishingly, and many take matters into their own hands using untested herbal remedies or visiting backstreet clinics. Sadly a lack of information, knowledge of a safe facility and stigma stops Indian women accessing information regarding abortion, and evidently, contraception too.[8]

Much closer to home the struggle continues fiercely. In Northern Ireland – just a mere few days ago – the Police Service of Northern Ireland raided two premises searching for abortion pills that are illegal in the region.[9] One Northern Ireland pro-choice activist has called for the central British government to ensure no human rights breaches occur in the UK. Healthcare is devolved to Northern Ireland at Stormont, but a November 2015 high court ruling found that the Northern Irish abortion ban is a breach of international human rights legislation.[10] The First Minister of Scotland, Nicola Sturgeon, has said that talks are going to take place to see if Northern Irish women could get free abortions from the Scottish NHS.[11] This compassionate gesture of goodwill to our friends within the union is inspiring, however, it should not have to be the case and it won’t solve the problems women face regarding taking time off work and paying to travel abroad to seek abortions. 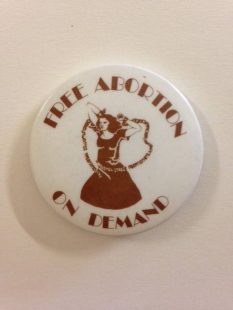 In this badge a woman is shackled with chains but she is throwing up her arms in defiance and has an angry expression on her face. For years reproductive rights campaigners in Northern Ireland have been trying to change the law to make it legal for women to access abortions, however, presently in 2017 this is still not the case. Many women travel to Scotland, England and Wales to book into private clinics which at 14-19 weeks pregnant under sedation costs in total £927 at Marie Stopes clinics.[12] This is just one example out of many which show that abortions are a class issue as well as a political and religious one.

However, it is not all doom and gloom as there is major steps forward taking place in regards to male contraceptives. A male pill is being tested: the effects are almost instant and it would only take a few days to wear off in comparison to the female pill which can take months.[13] Additionally, a non-hormonal male injection has been created which is the equivalent to a reversible vasectomy.[14] Both of these would help relieve the burden women have regarding contraception as the only other two male contraceptives available are vasectomies and condoms which have obvious drawbacks of their own. If these new contraceptives are to become available it will be interesting to see how many men take on the responsibility, to document the backlash they receive – if any as we know that by living in a patriarchal society that double-standards are common – from conservative politicians, religious authorities and pro-life activists as well as to record whether venereal diseases increase. 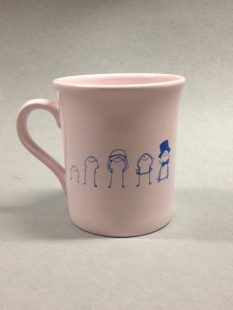 This adorable pink mug is advocating for condom usage for men. It depicts a penis getting ready for a “big night out” with the condom being the equivalent to a top-hat. Condoms are an easy and effective method of contraception but most importantly it is one of the only forms of contraception that helps decrease the risk of contracting an STI which is still a major problem the world over.

But please, do not despair! The activism of women, pro-choice organisations and political stances nations have taken recently is just the ray of hope we need in this dark and gloomy atmosphere we find ourselves in. Things like Gynopedia (a site that provides free information about where to seek contraception and advice in cities around the world)[15] have risen like a phoenix from the ashes from the burning down of some of our predecessors’ hard work.

The solidarity of protestors globally in January 2017 and for IWD is moving to see; GWL does boast a small but growing collection of objects which women have made for the marches which include pussyhats, banners and more! 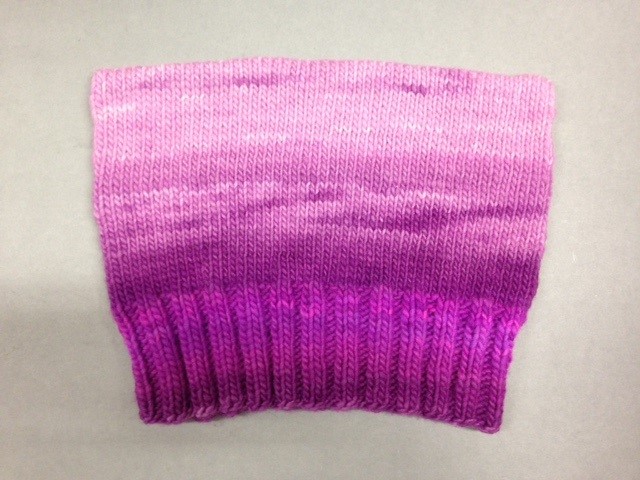 This amazing and cosy hand knitted pussyhat was worn by Lea Stern at the Washington D.C women’s march in 21st January 2017. Over 1 million women marched in D.C and over 5 million worldwide against Trump and as a sign of solidarity.[16] The name pussyhat is a way of re-appropriating the word ‘pussy’ in a positive way[17] and this contemporary artefact is proof that there are people out there who believe in advancing women’s rights and aren’t afraid to show it.

A brief shout-out to the first ladies of reproductive rights, Margaret Sanger and Marie Stopes, though I would be scared to see what their responses are to the fact we are still fighting for the same cause hundred years on. Evidently the struggle still continues today and many women, myself included, feel passionate about what we think is right and are frustrated with the snail-pace progress and the lack of support from politicians. It is a divisive subject in which opinions vary extensively but the Planned Parenthood’s mantra of ‘let all women decide for themselves’[18] definitely works for me.