As the archivist at Glasgow Women’s Library, I spend the majority of my time here working with the collections and I have found it difficult picking just one thing for this post.  Our archive stores are filled with amazing objects and artefacts documenting and celebrating women’s lives and experiences.  I have worked at GWL since 2014 and over the last two years have very much enjoyed familiarising myself with this unique collection. Frequently when choosing material for archive events, I am struck by how important and wonderful the GWL collections are and how fortunate that the library is here to ensure the material is preserved.

The item that I finally decided to write about is a recent addition to our collections, a book once owned and annotated by the Scottish suffragette and activist Helen Crawfurd. ‘The Political Meaning of the Great Strike’ by J.T Murphy is a Communist Party publication about the general strike in the United Kingdom that took place in May 1926. The Trades Union Council called the strike in an attempt to force the government to prevent wage decreases and worsening conditions for over one million miners.  Helen joined The Communist Party in 1921; she edited the woman’s page of their newspaper and was quickly elected on to their executive committee.  She also stood as the party candidate for Govan in the municipal elections of 1921.

The book was donated earlier this year and caused some excitement in the library when it was brought in. It is fair to say that Helen Crawfurd is much admired at GWL and has featured in various projects over the years including March of Women, Illuminated Letters and most recently Forward! Remembering Women Peace Campaigners. The timing of the donation couldn’t have been better as it became part of Forward’s exhibition which highlighted the work of some of the key figures in the Women’s Peace Crusades in Scotland.  Helen Crawfurd was vehemently anti-war. Although a great supporter of the Women’s Social and Political Union (WSPU), doing stints in both Holloway and Duke Street prison due to her campaigning for women’s suffrage, Helen greatly disagreed with their support of the war effort. Like other militant suffragettes, she left the WSPU in protest. She instead went on to help organise a peace conference in Glasgow in 1915, which led to the formation of the Women’s Peace Crusade, an organisation that became one of the leading voices in the anti-war movement in the UK.

The book is annotated with sections underlined throughout.  Books that have been annotated by their owners can give a special insight into the reader and it is wonderful to think of Helen reading this publication, writing a speech or an article, or just becoming impassioned by something she has read in it.  For example, some of the sections she has underlined have multiple exclamation marks including a paragraph on the leadership of the Labour Movement  so we can surmise that Helen felt strongly about this matter.   It is wonderful that GWL has this amazing item in our collections that gives insight into the mind of a remarkable Scottish Women who tirelessly campaigned for social justice throughout her life.

For more information on Helen: 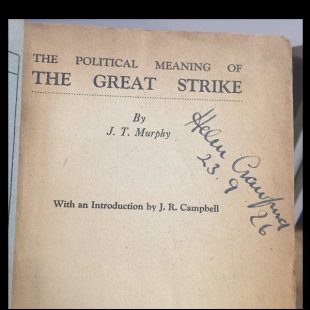