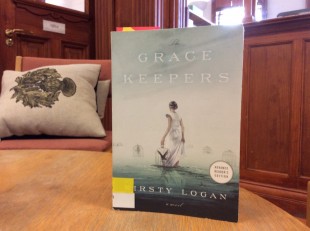 “The Gracekeepers” by Kirsty Logan**

A book that is best described as an adult fairytale, The Gracekeepers tells the parallel stories of North (along with her bear) and Callanish. The plot follows how their lives intersect as they learn to make their own paths in a watery world split into opposing caste systems. Those who live on the sparse amounts of land believe themselves to be above those who live on the water, and they pride themselves on their sturdy homes and farmed foods. Meanwhile, those who live on the water in boats (such as North, who resides in a floating circus) refuse to be looked down upon for eating the spoils of the sea and avoiding setting foot on solid ground.
Full of drama and intrigue, this book contained lovely, floating, effervescent language. I find that Logan uses turns of phrase that surprise and delight the senses, as a sentence will begin quite normally and then shift into something more magical halfway through.
The one aspect of the book I didn’t love was that there is no world building covered, as the world is already built and the reader is simply placed inside of it. For those who like answers and explanations, like me, you’ll be a bit disappointed by that. (But it can be easily overlooked) 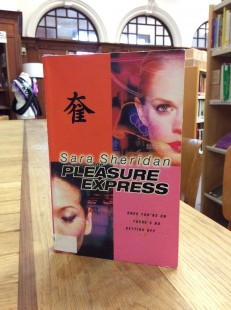 Kate leaves Coatross, certain she’s meant for something big. After a stint in London, Kate becomes one of Hong Kong’s most expensive call girls, and finally begins living the glamorous life she always imagined. But her blissful ignorance can’t last forever, and the darkness around her begins to cast shadows over her life.
I would describe this book as a perfect beach read. The characters often lacked a certain depth in regards to self reflection, and Kate could be a bit self-centered. However, the story itself is fast paced and interesting, with plenty of drama.
My favourite aspect of this book, however, is the great respect and matter of fact tone the author uses regarding sex work. Kate never played the victim to a clichéd degree, and the writing was never patronizing, which was very refreshing. 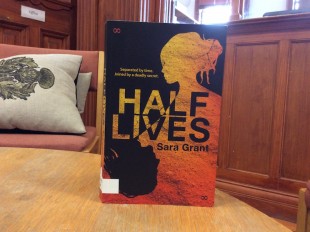 “Half Lives” by Sara Grant

This story can be a bit cringey at first, as it seems to be trying too hard to appeal to young people, as well as push various messages across a bit heavy handedly (regarding both terrorism and nuclear waste). I often found that in the story the message would be subtly relayed to the reader, and then immediately spelled out in stark detail again. Some faith in the reader would have been much appreciated.
The plot switches back and forth between two time periods hundreds of years apart, and so the narration switches as well. That chapter to chapter variation in narrators can be off-putting to some.
The story ultimately has a slow build and the pay-offs are few and far between. However the ways in which the past begins to connect with the future timeline is very clever. Although the plot holds very important messages about the world we live in and our own perceptions of it, the characters lack a bit of depth that was sacrificed in order to highlight the real life plot connections. It is not the best book I’ve read this month by far, but it is worth a read simply for the unique intertwined timeline. 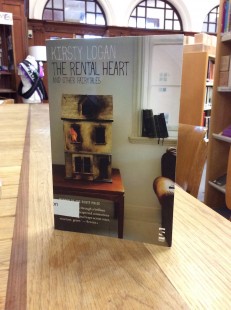 “The Rental Heart and Other Fairytales” by Kirsty Logan**

This collection of short stories is described on the back cover as “twenty tales of lust and loss”. While that is certainly true, these tales are unlike any of the stories of lust and loss that you have read before. These are magical, imaginative re-tellings and brand new storylines.
As someone who is not usually interested in short story collections, I had to read this after finishing “The Gracekeepers”, and it did not disappoint. There is a matter of fact-ness about Logan’s mystical worlds. She does not waste time explaining why they are the way they are, but instead just tells a brief story from another time and another place.
The stories themselves have marvellously strange characters who, despite the brevity of the stories, seem quite real and are incredibly engaging. Some of the fairytale re-tellings were recognizable, and some were not, but all of them made for a delightful read.
One story of particular note was a re-imagining of the “wicked witch in the woods” that becomes a story of a young closeted lesbian who finally finds a place that she is accepted and loved, and discovers that that may be all she was really looking for all along. 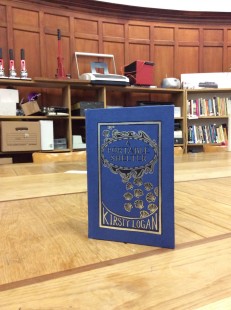 “A Portable Shelter” by Kirsty Logan**

“A Portable Shelter” in itself is a very unique concept. The short stories in this collection are connected via an agreement between two women that they will not tell stories to their growing child, only truths. However, both women break their promise. Liska tells her stories to Ruth’s growing belly when Ruth is asleep, and Ruth tells her stories when Liska is away at work.
I found this collection to be more graphic than the first one I read, but with the same sense of humanity even in the strange. And yet, even though the stories are more graphic in theme, in structure they are subtle enough to capture attention and imagination. There is a young selkie fisherman, a woman who falls in love with a werewolf and keeps him in her home like a dog, and a group that meets each week with EMF detectors and Ouija boards, eager for a negative result to prove that the ghosts that haunt them are not real.
Often the mystical and magical is implied, which I thought went very well with the idea of “truths, not stories”. The reader gets the sense that the tales encapsulated in this collection are both, some of them more story than truth, but each with an idea, revelation, or warning about life.
And that is the most engaging part of all. Each story carries within it another story; a cautionary tale, an attempt to explain the world, and why the world is unexplainable. As you read along you begin to understand both the reason Liska and Ruth find storytelling dangerous, as well as the reason they both cannot keep true to their rule.

All of these are available in GWL’s lending library.  Browse or borrow them next time you visit!

**Kirsty Logan participated in the GWL commissioned 21 Revolutions project. You can check out her contribution, This is Liberty, via this podcast, where she reads her story and speaks about the unique process of creating it.