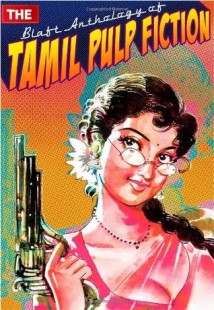 Something slightly different today, from our pulp fiction collection. The Blaft Anthology of Tamil Pulp Fiction is a 2008 collection of 19 pulp fiction stories by 10 Tamil writers, including two women – Vidya Subramanian and Ramanichandran (both of whom have two stories in the collection). The stories have been selected and translated by Pritham K. Chakravarthy (a woman who has been a big fan of pulp fiction all her life).

Vidya Subramanian has written short stories and novels for 20 years. Her protagonists are generally middle class, urban women who are making their own way in the world. They are more independent than many women in Tamil popular fiction, and her stories often have a feminist streak. Her story ME (1987), for example, is about an argument between a mother and daughter who live together. The daughter tells her mother that she is having sex with a man she has no intention of marrying.

Ramanichandran’s stories are more traditional and she is the best-selling author in the Tamil language, having written over 125 novels. She has certain rules about what she will and won’t write about: “No caste conflict, no religious conflict, no terminal illnesses, no characters with serious vices. My stories should make people happy. They’re 100% soft romance.” (1) DIM LIGHTS, BLAZING HEARTS (1997) is a romance story about a girl who refuses the advances of a man she loves merely because she suspects him of having had another girlfriend. I particularly love the line: “She was not prepared to feast on a used plate”!

The Blaft Anthology of Pulp Fiction is available to borrow at GWL. And why not come along to our pulp fiction workshops and exhibition.

(1) From Introduction to Blaft Anthology of Tamil Pulp Fiction