Q&A with Donna Moore, Pulp Queen in residence at GWL – by Morgan Fraser

Morgan: What was the first pulp fiction you ever read?
Donna: That was so long ago I really can’t remember! I would have been really young when I picked it up in a second hand book shop, or maybe even from my mum and dad’s shelves. It wouldn’t have been anything particularly racy; it would probably have been a Private Eye novel. But I’ve always loved pulp fiction, and part of that is the covers. There are some I have at home that I’ve bought just for the covers. 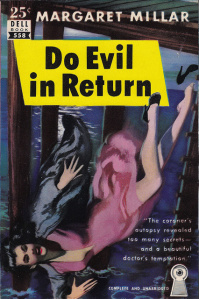 Morgan: What pulp genres and authors are your favourite?

Donna: I’m a particular fan of crime fiction. I love Dorothy Hughes, who wrote In a Lonely Place and Ride the Pink Horse. In a Lonely Place really showed the misogyny of American society at the time. It was turned into a film with Gloria Grahame and Humphrey Bogart, but the book was better, and had a very different ending. Another of my favourites is the underrated Margaret Millar. She wrote some award winning crime fiction but she’s not as well known as her author husband, Ross Macdonald. 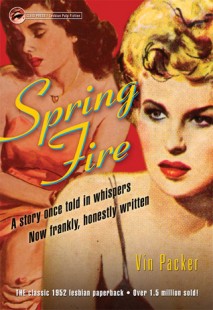 I also really like some of the lesbian pulp fiction in our collection. You can often tell which ones are written by a man and which are written by a woman. The characters are really well drawn in lesbian pulp fiction written by women. One of my favourites is Vin Packer, whose real name was Marijane Meaker. She wrote Spring Fire – the first pulp fiction paperback to have a lesbian protagonist. Of course, at that time, nothing that was deemed ‘immoral’ was allowed to have a happy ending, so that the book could pass the censors. Packer always considered republishing the book with a happy ending, but she didn’t do so in the end. The original ending sets the book in its historical context, which I think is important. Spring Fire is a pretty hard-hitting book; it shone a light on what was happening in society at the time. Although a lot of  lesbian pulp fiction was written with a male audience in mind, Packer got a lot of fan letters from lesbian women saying that they finally had someone in a book that had relevance to them. 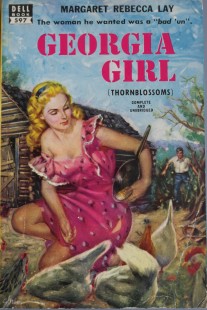 Morgan: How were women treated in pulp fiction?

Donna: Well, they’re quite scantily clad on the covers, and, often, inside the books as well! Often women are portrayed as either being trouble or being in trouble – someone who leads the male protagonist astray or who needs to be saved. One of my guilty pleasures is Richard S Prather. He wrote a series of books about Shell Scott, a private eye who basically sleeps with a brunette, a redhead and a blonde – at least one of each – in the course of a book. They’re really funny, just totally over the top and great fun.

Quite a lot of pulp authors wrote stuff that was considered sleazy, but it wouldn’t be considered that way now. It’s actually quite tame in terms of sex and violence because they had to get it past the censors. But they would have been titillating at the time, although the covers might not have had anything to do with what’s on the inside – such as there isn’t any scene in Valerie Taylor’s The Girls in 3-B where they’re all getting undressed together as they are on the cover! As for the women inside the pulps, some of the pulp fiction written by women portrays female characters who are quite strong, but in others they’re not because the authors had to follow a certain formula, and the books were aimed at a particular audience.

A lot of pulp fiction written by women gave a clear message about the unfairness of society at the time. Faith Baldwin’s Skyscraper, for example, shows the inequality between men and women in the workplace. The young woman whose story it is has a choice between marriage and a career. Not only does her boyfriend not want her to work after they get married, but she’s told that her employer would frown upon a married woman working and would definitely get rid of her because her husband-to-be works in the same place. Vera Caspary – another of my favourite authors – also wrote about independent women struggling to establish an identity in an unequal world. 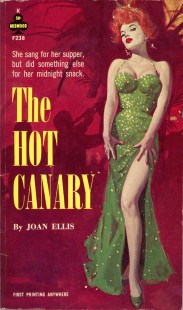 Morgan: Have you got any favourite covers?

Donna: I prefer the original Gold Medal and Dell covers from the 40s and 50s to the more modern ones. And I love the Midwood covers – many of which were done by an artist called Paul Rader. Midwood was one of the main publishers of erotica or sleaze pulp fiction and the covers are highly collectible – more so than the fiction inside them. It’s not just the images that I like, but also the enticing blurb.  How can you resist, for example “She sang for her supper, but did something else for her midnight snack”? Or: “The poignant story of a small town bad girl”? Or:“Dirty Money, sleazy morals and A DOUBLE MURDER!”? Capital letters and exclamation marks abound. The medical romances have some of my favourite covers. Like The Doctor is a Lady or Desperate Nurse.  Although I’m not a huge fan of romance novels, they’re so tempting just because of the covers.

Morgan: Do you think the pulps would have been as popular if it hadn’t been for the covers? 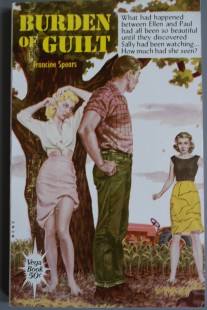 Donna: I think it’s the whole package. They were cheap and easily available. They were designed to be the size and shape that would fit into a little magazine rack, waiting for you to pick them up as you queued for your prescription or your bus ticket and then be tucked into a handbag or a pocket; and they were brightly coloured to stand out and attract you. Your eyes are drawn to them. The covers had a lot to do with their popularity. If you’re looking for something a little racy on your boring train journey, you’ve got covers with women pinning their hair back and with their skirt up around their waist, and the suggestive blurbs on the front, well you’re going to want to find out what happens! And the book’s so cheap you can always leave it behind on the train in case you don’t want to get caught with it!

Morgan: Is there modern pulp?

Donna: Popular fiction is today’s equivalent, I guess. But they’re all so long now! You’ve got these blockbusters that you get at the airport and they’re huge. I like something like the pulps that you can just put in your pocket, rather than give yourself a hernia carrying. Pulp fiction has been reclaimed: there’s a lot of pulpy crime fiction that I like, and there’s also quite a lot of pulpy science fiction.  Fan-fiction is another modern equivalent, maybe. A couple of years ago I wrote a short story for an anthology called Short Stack which was a book of pulp fiction short stories written by women. The idea of pulp fiction is one that still really attracts people; it’s just changed slightly. The old stuff is definitely worth revisiting, though. I love it.

Why not come along to our pulp fiction workshops, or visit our exhibition to find out more.