First up as part of Sex in the Women’s Library Sexology Season, three films on various aspects of women’s sexuality. The film season consists of But I’m A Cheerleader (18th April), Margarita with a Straw (2nd May) and Turn Me On, Dammit (16th May). The diversity of experience portrayed is no mean feat, including “curing” practices, visibility for bi disabled women of colour, and following your desire.

I spoke to programmer Megan Mitchell on her choices behind the films, and the complexities of each of the subject matters.

But I’m A Cheerleader, is a 90s satirical comedy about an American girl sent to a school to cure her lesbianism. This film is close to the bone, and reality, for many LGBT folk. I asked Megan about the film’s satirical approach:

“it takes pretty heavy issues, mainly “curing”, and deals with it in a way queer people can laugh with, can relate to as well as offering a platform for discussion around the issue, both in its extremes and in it’s more subtle ways such as being told “it’s just a phase” etc. and how this effects queer women’s life’s and mentality when thinking about their own sexuality.”

Jokes aside, aversion therapy, the idea that LGBT folk could be “cured”, started in the 1930s. Although the practice largely died out with the removal of homosexuality from the American Psychiatric Association’s Diagnostic and Statistical Manual in 1973, conversion therapies are very much alive and kicking particularly in the US. (Gender Identity Disorder is still on there; trans folk are split on the classification). Only yesterday I got an email to sign a petition to stop a conference in London ‘for people that have struggled with same-sex attraction’ and speakers claiming they have been cured of their gay lifestyles’.

But I’m A Cheerleader is scarily relevant. Watch the trailer here.

Margarita, with a Straw is Shonali Bose’s Sundance film from 2014. It’s a drama about a young Indian woman, who identifies as disabled, discovering her bisexuality. 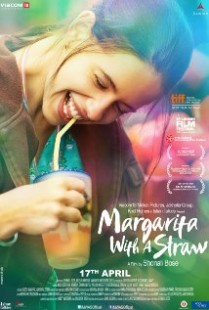 Megan explained why she felt it was important to programme the film:

“Films exploring intersectional identities was something I really wanted to include in the season. There is very little real representation of women on the big screen, let alone women of colour, disabled women, queer women, asexual women, and really any women who exist out with the one dimensional cinematic portrayal of women so to find films with, not perfect, but at least richer content screening in an environment such as GWL that wants to nurture women is so important”

She’s right. If our society likes to represent anyone, they’ll most likely be white, straight and non-disabled. Feminism does not always support visibility for women not in those categories, especially if they don’t just belong to one marginalised identity.

The film has its downfalls, a non-disabled actress plays the main role, but it’s a step towards some kind of visibility for queer, disabled women of colour. Given that we live in a culture that likes to de-sexualise disabled people – which is a shame when there is so much to gain from listening to everyone’s desires – to see a disabled-identifying person actually having romantic/sexual relationships on screen is a breath of fresh air. The event is followed by a discussion on disabled women’s sexuality, go forth and voice your own opinions!

Wet your taste buds with the trailer

Our third and final film, Turn Me On, Dammit sees 15 year old Alma embrace her sexuality in this coming-of-age flick. The event is followed by a song-writing workshop and takes place at The Arches (who are having their own sexology weekend in May).

Megan articulates the ways in which the depiction of Alma’s unapologetic approach is empowering:

“I think the idea of being unashamed of your own sexuality is radical, it’s a form of self love to accept who you are and what you want, but sadly some women don’t have safe environments to grow this radical self love and if the library can that one safe space where they can then that would be amazing.” 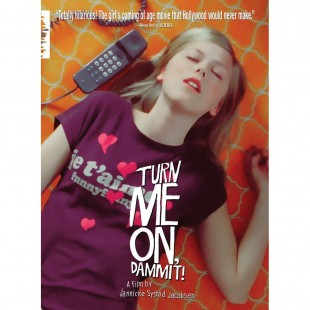 Of course, for women to be open about her desires is not without complications. Particularly as a teenager, I remember how much my sexually confident women-identified friends would have to defend themselves in comparison to the boys.

“There’s an obvious double standard in society regarding women’s sexuality, where women are hyper sexualised yet also shamed for expressing sexual desired and it’s too tough to negotiate with that setting, women just can’t win”

To give yourself a preview clickity click, right, yeah, there

Well. I don’t know about you but I’m mega excited by the selection on offer, and I think the library has clearly put the effort in to trying to show a variety of experiences. Some interesting discussions are going to kicked off for sure. Get on down there.

“I think film can be a facilitator for a lot of important conversations, it can connect with people in a way no other art form can and, as some of these films show, can start to dismantle the taboo of women owning their own sexuality”

All I hope is that these screenings can be a beginning to starting a conversation between women about their sexuality, how society reacts to them because of it and they operate due to this”