The residency has progressed and evolved into such an unexpected shape, the sheer momentum of engagement and response to women has made time slip away. There are four months to go and on Thursday 19th of March we are having a meeting to discuss what has been achieved and what is proposed for the final episode. I say episode because the residency has had that quality, of phases, moods, urgent at times and at other times more speculative and expanded. The last time I blogged was in October when I was looking at video tape in the women’s library. In the pile of tapes was one called A Person Again by Vikki Fleck who is someone I have known for a long time but had no idea she had made this work. The film is in the Zero Tolerance archive, among other vhs films which explore abuse, within the criteria of public information delivery, as animated exercises on bullying, and as documented accounts of the process of reaching out, seeking refuge and starting to rebuild.

What was interesting about Vikki’s film for me was the counterpoint it provided, the voices from another time speaking about something that still feels exactly the same but worse. It was made pre the digital umbilical, pre revenge porn, text based intimidation, iPhone soul stalkery, before spyware, data sticks, Facebook, before there was a platform for the mainstreaming of hardcore pornography, which is used by girls to learn what is the “correct” facial expression they should adopt on top, and by boys who, when asked where is the best place to ejaculate? respond with “on her face”. Young boys who have not learned about intimacy, young girls who have not learned about their equality. They are learning about power and who wields it.

I have a son, he is seven, he is listening to Capital radio because he is pig sick of Radio Four. And I realise he is singing along to a song where a guy is telling his “shortie” that he doesnt mind her dancing on the pole just bring home the money and make all the other guys jealous that she’s his bitch. I turn it off, with no warning, and he starts to cry because he thinks he has done something wrong.

I am studying the male abuse of women, as an artist, in the context of being an artist, meaning something will be made from this study. Artwork will emerge. By who? Me?

We know so much more now about abuse, violence, assault in terms of what happens to the mind. The invisible place. We know about post traumatic stress disorder, the effects on children who bear witness to domestic violence, the effect on children who are abused, how the brain develops when devastated. We have a sophisticated overview of male abuse of women, we have found the patterns, recognised its strains, how it transcends class, age, religion, nationality. We know it is a fundamental abuse of power, obtained within the patriarchal privilege, we even have special courts to address the epidemic, the Domestic Abuse Court.

But we still expose women to adversarial justice procedures which fail them, we put them in front of juries who can silently enact their own prejudices, we allow abused women to be judged, as witnesses to their own violation, assault, battering. We focus on corroboration for a crime that takes place in the utmost privacy. We ignore the expertise of front line workers who could provide insightful evidence, talk to signs and symptoms. And then we leave all that behind, wipe the slate clean for family court where an abuser can plead to see his children safe in the knowledge that his violence will not be cited in a family court before the Sherrif because it is not considered relevant to family contact.

What artwork can emerge from this dog’s dinner and who will make it?

I will not ask a woman what happened unless she wants to tell me. The memory sloshes out over the edge sometimes, we are discussing birthdays, she remembers “that was the one where I had to get my teeth out because he broke my jaw.” A woman describes not being able to see her face in the mirror and then wondering if even that memory is real. A woman says, we sat in the refuge and I couldn’t even pick up the tv remote to change the channel, I couldnt choose what I wanted to watch.

I was introduced within the NHS to the principles of Community Development and this interest is reignited by meeting women who are studying it or applying its tenets to their practice. I see a dovetail between that and socially engaged art making, artist run space, taking responsibility and self determining. I see the radical principles of The Women’s Movement, which built the first refuges and made powerful space for women. Im watching The Women’s Library be disemboweled to forumlate an enriched new space, “The Women’s Library Hears Me Pauline”, is the title of a public artwork made in collaboration with women who have used the library to forge their own resilience.

We have naturally gravitated to a communal space. Our own space. The Women’s Unit. We are in there making artwork, its a crucible. Its a Free Space. Our first fight was over the cleaning.

OCD and cleaning can be a symptom and a coping mechanism. But suddenly the urge to clean was being surpassed by the urge to draw, so a mental tug of war ensued around rotas and duty and me declaring This is a ***@%6*** Feminist Artspace we don’t come here to clean. It was the best and most invigorating experience because we are OK and it works. And the obsessive cleaning has abated because art is way more interesting.

The artwork wont be made by me, it will be made by us, about us. At The Women’s Unit. I think it will be an animated documentary film which explores what has happened to several women who’s lives have changed, very suddenly, through making some of the most astonishing art I have seen evolve in accelerated outbursts of pure expression. It’s a joy. It also demonstrates unequivocally, the invisible labour of women recovering, which is currently unacknowledged, and starts when the abuse stops. The job of their own.

The Women’s Unit is open 10-4pm Mon-Weds (or by appointment) at 17b Castlemilk Arcade, Dougrie Drive, Glasgow G45 9AA. Our mobile number is 07519362129 or email mandy.mcintosh@womenslibrary.org.uk We are currently showing new work by participants at the unit. 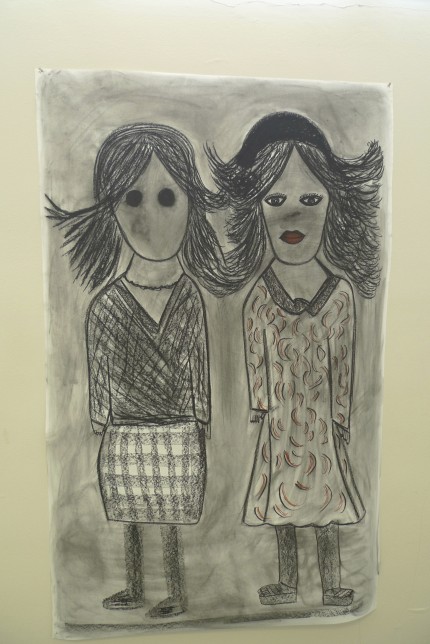 Thanks to Jackie Smith at Say Women and Rosina McCrae who specifically contributed to this thinking and development, particularly legal issues. Thanks to all the participants in the project to date. Excited for next stage!