Glasgow Women’s Library has been buzzing lately with all the preparations for MARCH oF WOMEN which is taking place on Saturday 7th March!

On this day, a procession of women from Glasgow and beyond (all wearing white) will spill out of Glasgow Women’s Library onto the streets of Bridgeton to celebrate the achievements of women past and present.

All are welcome to join us for the procession at 2pm from Glasgow Women’s Library, 23 Landressy St, Glasgow. We will be marching to Glasgow Green (not far from the women’s library)

As well as the procession there will a performance of the play ‘Pageant of Great Women’ by Cicely Hamilton written 100 years ago, and last performed in 2011 by Fragments and Monuments. With over 50 scripted roles in the play, there will be over 100 women taking part in this project.

You can find out more about the March of Women and all the activities leading up to the day at:

The original plan was to represent 50 fabulous women from Scottish history who may have been activists, suffragettes, artists, writers, actresses and so on.

The list was then expanded to include diverse women who have undertaken significant work around the globe! So when I returned from Maternity Leave in early January, I had the pleasure of researching some of these remarkable ladies whose efforts are not recognised or celebrated enough!

Who are these women?

In general these are the women who battled against the odds to gain an opportunity to live equally in society.

Our lovely sessional staff, Tabassum Niamat, will be taking part in the march! She will be representing a remarkable lady called Doria Shafik.

Doria Shafik was a feminist, philosopher, poet and editor, and one of the principle leaders of the women’s liberation movement in Egypt as of the mid-1940s. As a direct result of her efforts, Egyptian women were granted the right to vote by the Egyptian constitution.

Tabassum embraced not only Doria’s passion but took in her persona as well. On the day Tabassum chose Doria, she went home and with the help of her daughter created her own ‘Doria look’ to represent at the march – in the image below Doria is on the left and Tabassum is on the right. Now that’s called getting into character!!

We can say both are classy sophisticated ladies!

We are pleased to represent these fabulous diverse women from history, alongside our Scottish sisters, in the March of Women 2015! 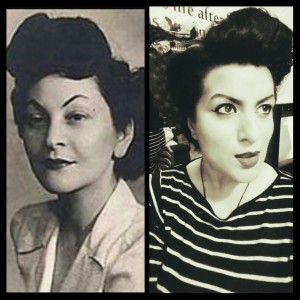