Wolf Hall and Bring up the Bodies by Hilary Mantel 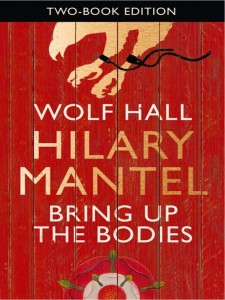 A few months ago, Hilary Mantel stirred up a storm with a speech that seemed to say, at least if you read the hysterical media coverage, that the Duchess of Cambridge was no more than a plastic princess. Those who sought out the full text found out that, actually, she was very sympathetic to Kate’s situation and was bemoaning the way that Royal women’s bodies are viewed, which has not changed very much through the ages. (What is she wearing? Is she pregnant?) She traced these attitudes back from Kate through Diana, Marie Antoinette and, her own particular area of interest, Henry VIII’s second wife Anne Boleyn, who is not the star, but has a pivotal role in these two books.

Wolf Hall and Bring up the Bodies are the first parts of a trilogy about Thomas Cromwell, who rose from humble beginnings as a blacksmith’s son to the highest offices of the Tudor state. How did he do this? He was obviously hard and ruthless – this shows in the famous portrait by Holbein, the painting of which is described in the first book. (Cromwell looks at the finished result and says “I look like a murderer.” His son replies “Didn’t you know?”) However, he was also very able, laying the foundations of a modern state over one governed by the whims of the aristocracy, and, in Mantel’s version at least, loyal and affectionate. His household is a happy one. He loves his wife and daughters and grieves deeply when they are carried off by “the sweating sickness”. He remains loyal to his first political master, Cardinal Wolsey, after his downfall and yet still manages to continue serving Henry. Everything he does is for the good of King and country – as he sees it.

Wolsey’s fall comes about because of the King’s marriage. His first wife, Katherine, has produced a daughter but no living sons and Henry, desperate for a male heir, suddenly discovers biblical scruples about having married her – she is his brother’s widow. Wolsey fails to persuade the Pope to grant an annulment and it is Cromwell who cuts through the knot by breaking with Rome and creating what England still has today, an Anglican Church headed by the monarch. Henry is now free to marry Anne, with whom he has long been passionately in love, largely as a result of her own careful management. Anne was not interested in being the King’s mistress – she wanted to be Queen and used her strongest weapon, her sexual allure, to hold Henry off for years. thus inflaming his desire until he promised to marry her. By the time of her coronation she is heavily pregnant, but the child is another girl and, like Katherine, Anne never bears a living son. Henry falls out of love.

When Cromwell notices the King’s eye falling on another lady of the Court, Jane Seymour, he lends her father money and makes sure that she is kept in Henry’s view. Jane is apparently meek and mild, perhaps a pleasing antidote to the feisty Anne, and must be coached in her role. Then, having been instrumental in Anne’s rise, Cromwell now gathers the evidence leading to her demise. Did she commit adultery with multiple men, including her own brother? Whether she did or not, Cromwell is prepared to send her and her alleged lovers to the scaffold. The second book ends with Anne dead, Jane installed as Queen and the title of Baron bestowed upon Cromwell.

The final part of the trilogy will be published next year and, even although I know how it must end, I can’t wait. I love what Mantel has done with the character of Cromwell. He did what he thought he had to do by his 16th century standards and, yes, many of his deeds are utterly repugnant today, but Mantel does a wonderful job of fleshing him out and making him sympathetic. Her treatment of the Royal women is admirable too: Katherine, Anne and Jane, all trapped by the will of the King and the functioning (or not) of their reproductive systems, but each fighting to shape her life as best she can. Things have changed, but by how much? Mantel’s controversial speech concluded that, although Royal ladies are no longer at risk of beheading, they can still be damaged by obsessive scrutiny and she urges people to “back off and not be brutes”.  It’s also worth noting that Katherine’s daughter, Mary, and Anne’s daughter, Elizabeth, both lived to be Queen, the latter being one of England’s most powerful monarchs. Henry’s struggle for a male heir was not even necessary – one of the ironies of history – yet it changed England forever, and all through the cunning and skill of a blacksmith’s son.