The Scottish Council on Archives is running a project to collect recipes, from families and individuals, from the familiar to the bizarre. With this in mind, I thought I would see what we had within our collections.

Within the library we have a collection of cookbooks published by the Scottish Women’s Rural Institute. 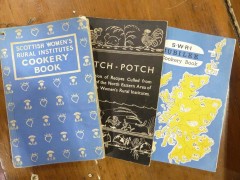 The 1952 Souvenir edition of the cookbook has a recipe for ‘Scotch Carrots’, which seems to be a version on the Scotch egg:

Prepare carrots and cook till tender. Mash potatoes and coat carrots with them – keeping the carrot shape. Cover with sausage meat. Egg and bread-crumb them. Fry in deep fat. Cut lengthways and serve very hot.”

Cookbooks not only show changes in diet and income, but recipes also reflect different cultures and periods of history. There is a recipe for ‘War Time Salad Dressing’ and Steam Pudding (War Time) which uses no eggs or sugar and only a ‘nut’ of margarine. In the baking section, alongside recipes for ‘Railway Cake’, ‘Russian Gingerbread’, we have a recipe for ‘Scripture Cake’:

Method. – Add citron and follow Solomon’s advice for making a good boy – | Proverbs xxiii, 14, and you have a good cake.”

Mix all together. Scald a cloth. Tie up mixture in it loosely. Cook in boiling water or soups such as broth or pea soup, for 2 hours. Serve alone or with meat or fowl. This can also be steamed in a bowl.”

And also the Shetland version of champagne!

This is a refreshing drink made by pouring enough water (hot) on buttermilk to make it separate. Drain the curd which can be pressed and eaten as “kirnmilk.” The whey is allowed to stand until it ferments and begins to sparkle. It is a delicious and refreshing drink and sparkles in the glass like champagne. After the sparkle goes off it becomes flat and vinegary, but may be restored by the regular addition of fresh whey.”

If you have an interesting family recipe and want to contribute to Scotland’s First Edible Archive Cookbook, you can send your pictures, stories and recipes to: The Scottish Council on Archives, 2 Princes Street, Edinburgh EH1 3YY, or email info@scoarch.org.uk