Irish Women of Our Past 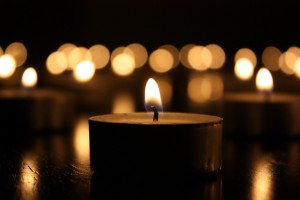 “A sea of candles are lit one dark December evening. Each candle represents a woman who made the journey away from Ireland over the years. Recalled by one of their descendants, these women are commemorated through this body of flickering light, bringing back their memories into a shared space as their names fade in and out in turn from a screen nearby. Dates, alongside the pockets of lands and water they crossed, appear beside their names, reminding those watching of both the physical and temporal distances covered, marking this phenomenon of mass migration”.

On Tuesday the 4th of December the sea of candles will be lit in memory of those Irish women who journeyed  to other lands. This sculptural space will be located at Film City (Old Govan Town Hall), Glasgow, located close to the Broomielaw where some of the boats arriving from Ireland would moor, with Govan itself a site of considerable Irish migration. The collection  of names of Irish women of our past has continued to grow  with more women remembered and represented by their descendants across the Diaspora, and more and more of their stories being remembered, recognized and shared. Each of the women’s names sent to Rachael will be represented by a small candle which will be lit within this temporary devotional space while the names of the women and the places they left are commemorated in a subtle video work close-by.

Rachael will  be filming the sea of candles and streaming online for those who have submitted the names to access with a password being able to see the event from any location, allowing them to witness the event on behalf of  their relation. The original candle which she lit for her own grandmother in Donegal, and then lit at the various ports on her recent visit will sit amongst these other candles, adding to the “sea” of light  – a simple but effective act of remembrance.

Artist-researcher Rachael Flynn has always carried a sense of Irishness  despite being born and brought up on the north east coast of Scotland. Her great- grandparents and grandparents were Irish and while she never knew her great- grandparents, she spent a lot of time with her father’s parents, listening to tales of their life back home and of their journey to Scotland, especially the stories told by her grandmother, Agnes Flynn (née McBride) recounting her journey as a fifteen year old girl running away from rural poverty at home to find work in Glasgow.

Rachael’s doctoral research at The University of the West of Scotland involves  a creative exploration of the memories of migration handed down within the Irish Diaspora, in particular a celebration of the women’s stories.

This creative engagement  is inspired and opened up through Rachael’s grandmother ‘s story  – Agnes McBride was raised beside the coast of Northern Donegal – the shoreline a continual symbolic edge suggesting departure. Immersed within Rachael’s research handling and creative methodology is the translation of diasporic cultural memory, and the collective awareness of this ancestral backdrop. In many ways this displacement is something that is repeatedly experienced, building up layers as it is inherited through the generations. Central to these creative processes is the documentation of the artist herself forming new engagements with the thematic concerns of the research: notions of separation, loss, distance, absence and the internal and external boundaries of a personal sense of landscape.

At the start of 2012, Rachael began collecting the names of women who left and departed from Ireland, as she sought to create a work which would aim to capture the individual struggles and successes of these women. Drawing from this collection of personal histories, she was created a form of map marking the significant points of embarkation, the last places these women had contact with the land of their birth and often the places where they left their families behind.

This process of mapping developed into a work which allowed both herself and the relatives of these women to commemorate the migrant women’s departures from these sites. Rachael set out on a modern-day pilgrimage around Ireland visiting the main ports the women departed from, taking with her the small candle which she originally first lit in front of her grandmother’s family cottage in Donegal,  and placing and re-lighting in their memory at each stop.

Please note that this event is not being organised by Glasgow Women’s Library but is the culmination of the Irish Women of Our Past project, which we held workshops for earlier this year.  If you have any questions regarding this event please contact Rachael Flynn Directly on rachael.flynn@uws.ac.uk