At the end of 2010, PhD student Georgia Walton joined us for a placement from the the University of Leeds. During her time with us, Georgia researched the way that texts in the GWL library collection explore the intersection of three themes: motherhood, environment and futurity. In this blog post that explains more about her research, Georgia also presents a brand new reading list that’s available to download at the bottom of the page.

Women’s environmental and peace movements have frequently invoked motherhood to further their campaigns. In 1981 the women who would go on to form the Greenham Common Peace Camp marched under the slogan, ‘Women for Life on Earth’. Many of these women were mothers and grandmothers, identities which they explicitly used to frame their opposition to nuclear arms. Their message was simple, nuclear weapons are endangering the lives of our, and all, children. Today the nuclear threat has not lifted but it has been taken over by the Climate Crisis as the most significant risk to life on Earth. The language that the women of Greenham Common used, of youth, futurity and motherhood, continues to be used by environmental protesters today; Extinction Rebellion, School Strikers and BirthStrikers similarly put today’s children and future children at the centre of their message. During my time at GWL, I have been researching the way that texts in the library collection explore the intersection of three themes: motherhood, environment and futurity. I have found it to be a rich area of interdisciplinary study with a variety of literary and non-literary texts that speak to these concerns.

In recent years there has been a proliferation of motherhood memoirs. Books such as Maggie Nelson’s genre-bending The Argonauts (2014) have reshaped the boundaries of writing about childbirth and motherhood. Rachel Cusk A Life’s Work (2001) and Elif Shafak’s Black Milk (2011) discuss once taboo subjects such as dissatisfaction with motherhood and post-natal depression. These memoirs draw comparisons between the creative act of writing and the creative act of giving birth. I am interested in how this recent literary interest in motherhood might be used to respond to the environmental crises that we face today. Bleak projections for the future of the planet have led to discussion about the ethics of bringing a child up in an increasingly inhospitable environment. In this context, how does motherhood take on a new significance? And how might it inspire or shape responses to the new and increased environmental dangers that we face?

The relationship between feminism and motherhood is a complex one. Whilst many feminists have sought to liberate women from domestic labour and to imagine female lives outside of rearing children, motherhood has also been an important symbol of female creativity and care in women’s movements. Ecofeminist discourses have too had to grapple with what it means to use traditional images of femininity; the association of the feminine with nature has been both productive symbol and problematic binary in women’s environmental thought. Indeed, recent attempts to refuse the gender binary in society more generally have widened the concept of motherhood to parenthood in order to acknowledge those who parent across the gender spectrum.  This changed terminology also accounts for the increased role of fathers in childrearing, a debt to previous generations of feminism. Thus, the language that previous generations of ecofeminists used has new resonances and presents different problems in our contemporary moment.

However, the language of futurity has never been so urgent or mainstream as it is now. Greta Thunberg’s School Strike, which quickly transformed into a worldwide movement, puts youth activism and the imagination of future worlds at the centre of its campaign. Extinction Rebellion too urges political action for the sake of future generations. But the most explicit use of parenthood in activist responses to the Climate Crisis (from a UK perspective) is that of the BirthStrike movement. BirthStrike is a group of individuals who have decided to publicly state their decision not to have children until effective political action is taken to combat ecological breakdown. The term birthstriking combines the language of motherhood with the language and actions of traditional labour movements. By doing this BirthStrikers build on historical feminist arguments that childrearing is a form of labour that people should be properly remunerated for. The movement thus renders personal decisions as irrevocably political.

The BirthStrikers message has recently gained mainstream traction with prominent US politicians such as Alexandria Ocasio Cortez publicly expressing sympathy with their sentiment. However it must be central when thinking about this topic to consider who is encouraged to have children and who isn’t; people of colour, those who identify as LGBTQ+, disabled people, working class people and single people have historically been prevented from or encouraged not to procreate. There are also powerful arguments for having children in this current political and environmental context. It could be that having children gives both individuals and society a greater stake in the future, enhancing the impetus for action. Furthermore, as the school strikes show, there is a huge appetite for a change amongst younger generations. Children have shown great leadership in environmental activism giving cause for hope and providing solutions to the problems that we face. 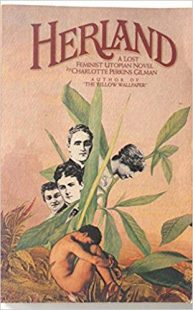 Many of the literary texts that speak to the intersection of these three themes are in the genres of science and speculative fiction; motherhood and parenthood have long been central to the ways in which women writers imagine different societies and worlds. One of the earliest examples of this is in Mary Shelley’s canonical novel Frankenstein (1818) which is a foundational text for women’s science fiction writing. Its themes of scientific ambition and neglect are central to the questions and challenges that we face today. More recently, Octavia Butler’s short story ‘Bloodchild’ (1995) uses pregnancy to scrutinise the complexities of systems of reciprocity between species. In the story, pregnancy is depicted as a radical act of accommodation which forces humans to rethink their centrality in their relationships with non-humans. Charlotte Perkins Gilman’s Herland (1915) is an important example of women’s speculative fiction that puts the values motherhood at the centre of its utopian vision. Though radical for its time the novel is highly problematic; Gilman articulates a eugenicist argument for racial perfectionism and her female society can only flourish after overthrowing a slave uprising. It is thus an interesting text for discussing how society determines who is allowed to reproduce and who isn’t.

Despite the prominence of sci-fi there are also novels, such as Ali Smith’s Winter (2018), which approach environmental futurity and motherhood in a contemporary setting through a realist aesthetic. The spectre of Greenham Common hangs over Smith’s book, showing how the political moments of the past shape those of the present.  Megan Hunter’s The End We Start From (2018), though set in the future, is in a world in which the organisation of society does not differ hugely from our own. Hunter shows us an all too imaginable future where families try to survive in a Great Britain that is at once familiar and unfamiliar.

I found several environmental books aimed at children. These texts show how an ethos of environmental care can be passed from parent to child. In particular, the book of songs and poems, Mother Gave a Shout (1991) explicitly operates on the idea of intergenerational exchange and education. The two books of poetry, Anne Boyer’s Garments Against Women (2015) and Michelle Detorie’s After-Cave (2014) both articulate an avant-garde poetics that slip between modes of science fiction, nature and motherhood writing.

As well as literary texts, there are many theoretical and critical works in the GWL collection that speak to the themes of motherhood, environment and futurity. The library holds numerous writings on ecofeminism, for example Earth Follies (1993) by Joni Seagar and Climate Justice (2019) by Mary Robinson. These texts respectively chronicle the history of ecofeminist movements and create a manifesto for our present moment. Donna Harraway’s seminal text Staying with the Trouble (2016) furnishes us with the slogan ‘Make Kin not Babies!’ challenging us to reimagine forms of collectivity and care both within society and between humans and the natural world. Harraway’s book can be read productively alongside Sarah Lefanu’s classic analysis of women’s Sci-Fi writing, In the Chinks of the World Machine (1988). Lefanu argues that Sci-Fi is the ideal form for feminist writing, providing unique potential for imagining alternative forms of society. Angela Saini’s recent book on race science, Superior (2019) offers an important counter to the eugenicist narratives of literary texts like Herland. Ideas of progress in futuristic stories of birth and futurity too easily fall into racist and ableist narratives of white supremacist racial perfectionism. And the anthology of essays, Revolutionary Mothering (2016) provides an alternative view to feminist campaigns for reproductive rights and the arguments of the BirthStrikers. Though explicit in its support for reproductive freedom, this book celebrates motherhood. It gives voice to the experiences of marginalised mothers and shows how the practices of mothering can be a rich resource for the radical reimagining and restructuring of society.

I hope that these texts can help us begin to answer the questions I outlined above. I am sure they can point us to new ways of thinking about motherhood on our changing planet and help us to imagine new solutions and new ways of coping with the challenges we are yet to face.